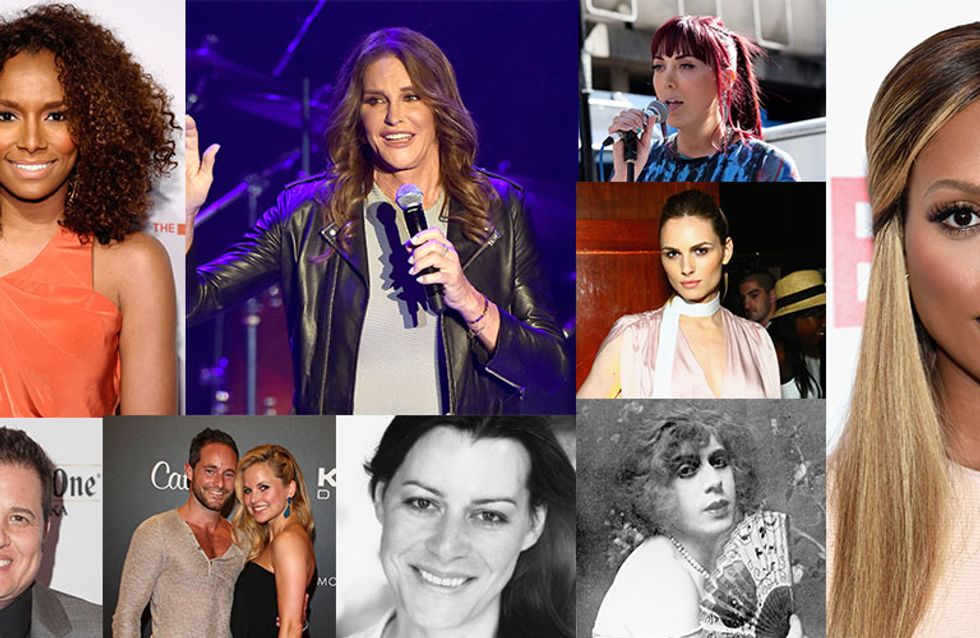 In 2015, the conversation when it comes to transgender issues is getting louder and harder to ignore. And thank f*ck for that! But whilst it is finally an LGBT issue that's being addressed, we shouldn’t get complacent - it continues to be a fragile subject. Which is why we need a strong trans community to look up to, and to give their rights a well-deserved spotlight. These beautiful trans celebs are doing just that, and being totally boss while doing so. Check 'em out!

Journalist Janet Mock came out as transgender in a Marie Clare article in 2011. Despite having some issues with the semantics of the piece (she wasn’t happy with the title “I Was Born A Boy” one bit), Mock chose the best platform to tell her story. She is particularly well known, not only for her good looks and fierce hair, but for an interview with Piers Morgan in which she felt he ‘sensationalised’ her life by concentrating on her relationship with her partner rather than her advocacy. Cue a Twitter spat, which sparked a debate about the empowerment of social media. (Piers was shut down hard by Mock supporters.) She also did an awesome ‘It Gets Better’ video, in which she spoke of the hardships she went through as a child.

Mock is keen to get rid of cliched phrases like ‘born a man’ and ‘trapped in the wrong body’ as she feels they’re harmful to transgender women. She started the has tag #womenlikeus for transgender women, to encourage them to share their stories about being called out, or deemed unreal, or felt like the didn’t belong. It became a vocal point for transgender women everywhere.

Paris Lees is a journalist and transgender rights activist. She founded META, which was the first British magazine aimed at the trans community. Lees also has columns in both Gay Times and Diva, and has also written for mainstream publications like Vice, The Independent and Channel 4 News. Lees plays a massive part in advocating transgender rights in all her writings, but she has also been working with Trans Media Watch, and recently challenged Channel 4 to remove transphobic material from its broadcasts. She also consulted with Channel 4 for their docuseries My Transexual Summer. Lees’ unflinching, no-bullshit approach to transgender issues earned her the number one spot on The Independent’s Pink List in 2013.

You may recognise Ms Cox from a little show called Orange Is The New Black. In it she plays transgender inmate Sophie Burset, who was in a bit of a pickle last time we saw her (#PrayForSophia). Last year, she made history by become the first transgender woman to receive an Emmy nomination for her role in OITNB.

Off set, Cox is a transgender woman, and a fierce one at that. She is well known as a strong advocate for the voices of black transgender women, and often uses her social media accounts to spread the word of transgender rights, as well as pointing out the uncomfortable truth about the amount of black transgender women still facing extreme violence and even death. Laverne recently helped make the film Free Cece, which documents the fall of Cece McDonald, a trans African American woman who survived a violent attack and subsequently ended up serving time in a men’s prison for defending herself. Laverne aims to bring to light the violence and prejudice that surrounds trans women of colour in America every day.

For those of us who are Eddie Redmayne fans, the trailer for The Danish Girl has already hit our peepers and we could not be more excited. But did you know the story is a true one? Eddie portrays Lili, born Einar Magnus Andreas Wegener, who was a Danish transgender woman, and one of the first identifiable recipients of sex reassignment surgery. When Lili was still Einar, she met and married Gerda Gottlieb, and they worked together as illustrators. One day, Gerda asked the then Einar to fill in for an absent model, requesting she wear stockings and heels, and thus Lili was born. Lili underwent three successful, but highly risky and experimental, gender reassignment surgeries. However - and this is a MAJOR SPOILER, so read on at your own will! - three months after her fourth operation to create a vagina, she passed away. But all was not in vein, as she is now considered one of the pioneers in sex reassignment surgery.

Caitlyn Jenner - previously known as olympic winner and Kardashian klan member, Bruce Jenner - came to prominence this year when her gender transformation was revealed in an interview with Diane Sawyer 20/20. Little did we know she’d soon have her own Kardashian spin off, which has been great: Caitlyn has been heralded in many cases as the most famous transgender person in the world, and partner with the fact that, as Bruce Jenner, Cailtyn was known around the world as both a husband and an athlete. She was therefore the most perfect person to document their transition, showing that even if you are the epitome of masculine, that doesn’t mean that’s the way you have to be, or that you have to hide. She brought transgender issues to the mainstream, and managed to open a dialogue that had previously had little air time in the real world. However, her program has had its fair share of criticism, with Caitlyn’s privileged background not conveying the difficulties other transgender women and men face sans the millions of dollars. But despite the criticisms, Jenner has used her position wisely, giving transgender issues as well as trans women a platform, and being brave enough to let go of the facade that she held onto for so long to face the world as her authentic self.

Root recently became the first transgender star of BBC’s new mainstream comedy Boy Meets Girl, which started this month. It’s also the first UK show to feature romance and sex scenes between a cisgendered man and a transgender woman. Quite a feat, if we do say so ourselves. The comedy is a mature, humbling and funny exploration of how these two people navigate through their relationship. Root is like the Laverne Cox of Britain. She firmly believes in trans people playing trans characters. Having said that, she has recently finished filming a small part with Eddie Redmayne in The Danish Girl, and tells The Guardian that it’s the fault of directors and producers rather than the actors that transgender people are not chosen for transgender roles. In between acting, Root works the comedy circuits and is a voice coach, specialising in transgender voice adaptation.

Balian Buschbaum retired from being a world recording-holding pole vaulter in 2007, because he decided to transition from female to male. Born Yvonne Buschbaum, he officially became Balian in January 2008. And by God, is he hot! Those muscles and that stubble, man. But he has said of his transition that the effects of the transition made him feel like “an overbred pit bull,” highlighting the side effects of female-to-male transitioning.

Andreja Pejic began her modelling career as Andrej Pejic, an androgynous male model who modelled on womenswear runways for the likes of Marc Jacobs and Jean Paul Gaultier. In 2014, however, she revealed that she had undergone sex reassignment surgery thanks to a little gold plated necklace that now read ‘Andreja’. She told People that she wanted to share her story with the world because “I think I have a social responsibility… I hope that being open about this, it becomes less of an issue.” Andreja had a classic suppressed upbringing that is symptomatic of most transgender children, and decided to use her position to promote awareness. She said of her transition: “Everyday is like a new revelation. I’m more comfortable than ever. I feel at 100 percent.”

Chaz is the only son of autotune queen Cher, and her ex-husband Sonny Bono… Also known as Sonny and Cher. Chaz, who started life as Chastity, is a transgender man and began his transition in 2008. Chaz’s experience became a documentary, Becoming Chaz, and was screened at Sundance Festival in 2011. Bono has also written two books about his experience. Since his coming out, his mother (I don’t know if you’ll know her) has become a fierce supporter of LGBT rights.

Which transgender celebrities do you admire? Let us know by tweeting us at @sofeminineUK.

16 Amazing Celebrities Who Have Come Out

by Pascale Day 66 shares
For all the best videos, memes and shareable news!