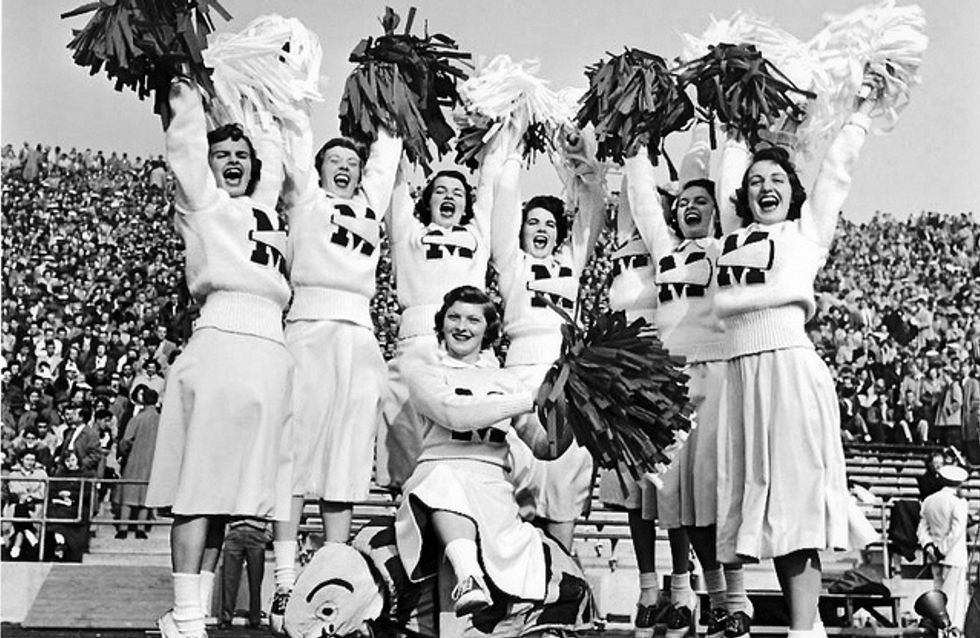 Want to get more girls into sport? Health and Equalities Minister, Helen Grant says the answer lies in 'feminine' sports like cheerleading and Zumba. We can't even express how many things are wrong with that sentence. Unsurprisingly, since her interview with The Telegraph's Wonder Woman, Grant has experienced some backlash for her comments, but is she really being that sexist?

The answer is a hands down yes.

​Helen Grant's comments followed discussions about what can be done to close the gender gap in sport. And we get it. We do.

Getting young teenage girls to do sport can be hard. Getting sweaty and gross in front of guys (ARGH) can be pretty intimidating, especially when we've created a culture where girls are expected to look perfect at all times.

There's also nothing actually wrong with wanting to look feminine while doing sport. Hey, if Jessica Ennis and Victoria Pendleton want to chuck on some make-up while they're scoring some golds at the ole 'lympics, that's totally up to them. Wanting to look good is totally natural.

What there is something wrong with, is the person who is supposed to be our country's figurehead for EQUALITY re-enforcing such ridiculous gender stereotypes. Not cool.

Grant said “[Women] don’t have to feel unfeminine,” when they're participating in sport. Instead young girls could look "absolutely radiant" in sports like gymnastics or ballet.

"There are some wonderful sports which you can do and perform to a very high level and I think those participating look absolutely radiant and very feminine such as ballet, gymnastics, cheerleading and even roller-skating.”

“Whether it’s a Zumba class or a game of rounders after they’ve dropped the kids off. That’s the approach we need to take – what works for them.”

She continued: “We really need to take a step back and actually ask women what they want and give it to them. Whether it’s a Zumba class or a game of rounders after they’ve dropped the kids off. That’s the approach we need to take – what works for them.“

Lets just remind ourselves that so far in Sochi, every medal for Team GB has been won has been by a woman. Though maybe they did look a bit too masculine in those helmets. Someone should've really warned them about that.

Do Helen Grant's comments make you angry? Or do you not see the big deal? Tweet us at @sofeminineUK.