by Helen Turnbull Published on 3 July 2017 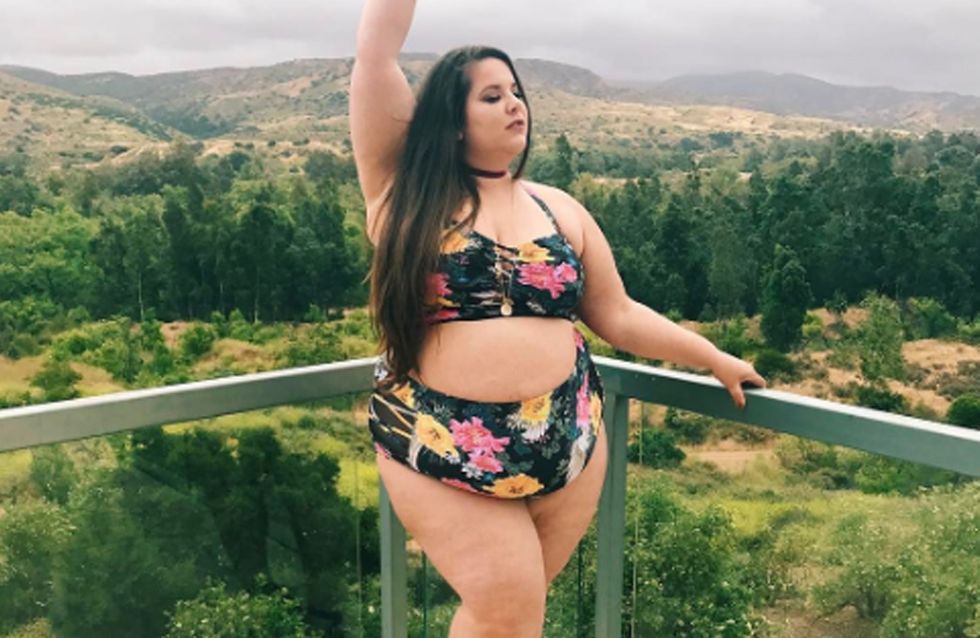 For 'every men are the worst' story there's a 'women are the best' story to restore our faith. This latest viral tale of body-shaming involves elements of each and both parties can teach us a valuable lesson about judging a book by its cover.

Flying can be daunting at the best of times - what with all the stories of planes disappearing recently - but imagine if you had the misfortune of sitting next to a fellow passenger who feels compelled to message his mates about your body shape. That's the exact situation plus-sized model Natalie Hage - who describes herself as extremely flight anxious - was unfortunate to find herself in during a recent flight to Los Angeles.

i'm shaking right now. i'm on a flight to LA right now on @americanair. i paid almost $70 extra for this seat i'm in because i know i need a little extra leg room. i'm extremely flight anxious but there were only middle seats available so i had to take what i could get. as soon as i sat down, the gentleman on my left began LOUDLY huffing, sighing, and readjusting himself in his seat. i see him furiously texting and then purposefully turning the phone away from me. so, naturally next time he texts, i take a look. the texts were about me and i'm almost positive he took photos of me. not only were the texts about me, but they were really mean and ugly, with even the recipient named 'linda' chiming back with shaming retorts...someone who can't even see the situation. if you can't read the texts, it says 'hopefully she didn't have any mexican food' and his response is 'i think she ate a mexican'. then he proceeds to say he's leaving a 'neck mark on the window' because he's so smashed against the wall. from the photos, you can see i'm not in his space. he's even taken over both arm rests on purpose, coming to my space and digging his elbows into my side...which is in my seat. his next text to her was 'if the news reports a DFW airbus a321 leaving the runway without rotating, that would be my flight.' another i see later? 'if these seats don't hold, it's not going to matter.' and that's just a few of them. there were several more. i didn't do anything to him. i'm in my seat, completely (see photos). i am crumpled into a ball trying to not bother. i'm just so upset. i asked the other man to my right if he'd switch me and told him what the man was saying about me and he said laughed and refused. that's fine, it's not his issue. this is a fat person's daily reality and not just on a plane. this is on a bus, standing in line at the grocery store, at a concert, on the internet. you can be completely in your own space, not bothering anyone, and people will still fuck with you and try to hurt you. all you can do is know you haven't done anything wrong just by existing and to move on. this just makes me a mixture of enraged and super sad.

Natalie purposely booked herself extra legroom only to be confronted by a huffing and puffing neighbouring passenger who immediately whipped out his phone and began furiously texting a 'Linda', slamming her size. The influencer shared details of the humiliating situation on her Instagram account, recalling how understandably sad and enraged the situation made her feel. Natalie recounted the story in a lengthy caption, including examples of the damning texts she glimpsed, and pictures of the culprit texting on his phone as evidence.

But rather than sink into her seat and forget it ever happened at all, Natalie did the unthinkable - she confronted him. She recorded the exchange in which she was heard telling him: "Do you normally make fun of fat people? Is that something you like to do?" He then has the audacity to suggest she shouldn't sit near the emergency door as she's not "willing and able" to help people should an emergency evacuation be called.

He eventually concedes, telling Natalie she's "absolutely right" that her body doesn't tell him anything about her and that it's none of his business. In the clip, which has been viewed over 1 million times of Facebook, he's heard apologising, blaming it on the fact he had a few drinks before boarding which obviously doesn't excuse his behaviour but goes some way to explaining it.

Natalie has since been flooded with messages of support - a response she's described as a "whirlwind". Gushing about the positive reaction to the video, she wrote: "Thank you so so so much for the messages and comments overflowing with kindness. My heart is full. I didn't want to leave y'all hanging - I actually ended up saying something to him when we landed. I couldn't NOT speak up. I'm so tired of fat people being a social punching bag. I won't stand for it. I hope this dude learned something today."

Have you ever been subject to mean body-shaming? Share your experiences with us @soFeminineUK

Strong Is Sexy: Serena Williams Has An Inspiring Message About Body Shaming