by Helen Turnbull Published on 20 April 2017 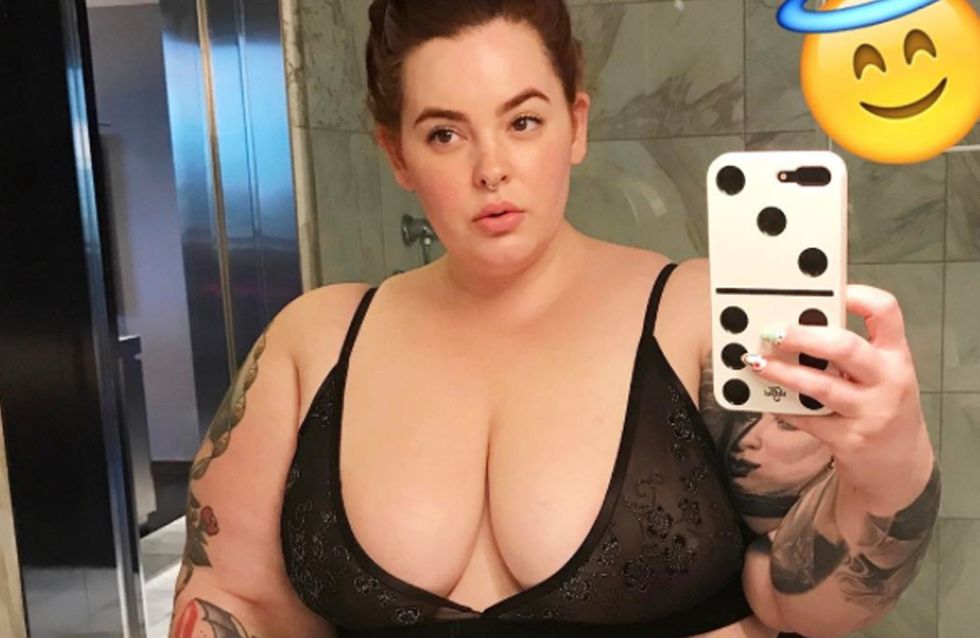 Body-positive advocate and hugely successful plus-size model Tess Holliday has vowed to boycott popular taxi-driving app Uber after being fat-shamed by a driver who is overweight himself. The mother-of-two - who is estimated to be worth a cool $3 million - shared evidence of the offending driver questioning her health, due to her size (which is a US 26 FYI), on Instagram and (most of) the Internet is backing her.

Tess Holliday is on a one-woman mission to boycott Uber after she was subject to body-shaming abuse by one of its drivers recently. The plus-size model - who is a household name within the industry - fumed: "I'm fat. I also have a fat wallet" as she outed the offending driver, who she described as 'fat' and appeared to look overweight, in a clip posted on her Instagram and Facebook profiles on Wednesday.

The eight-second video shows the Uber employee asking Tess about her cholesterol to which she replies: "My cholesterol is fine, I'm perfect. Yeah, I'm healthy." The video is then stopped. The footage - which was first posted on her Instagram Stories - has the words: "My driver who is fat is questioning if I'm healthy" pasted on top of it.

Tess was understandably left outraged and somewhat took her anger out in the caption, fuming: "Hey @uber I don't pay more to use your 'black car' service to be told that there's no way I could possibly be healthy because I'm fat and then questioning it.

"No one should have to tolerate this at any level of the services you offer. I'm fat. I also have a fat wallet & will no longer be using your services. Ever. Also after I told him I was healthy he turned the radio off & changed the subject. #putmymoneywheremymouthis#uberdriver #uber.

"Edited to add: saying my driver is fat was obviously being used as a descriptor & not to insult him. Also I did not show his face or use his name when filming, it was to be able to show what I deal with daily & why this behavior is unacceptable from anyone."

Tess has received an outpouring of support from the online body-positive community with many branding the driver's behaviour "unbelievable" and "unacceptable". Offering some comforting words, one Instagram user commented: "You're too amazing to pay any attention to that jerk. I admire your confidence. You help me feel okay in my own skin. We are beautiful," with another writing: "That's so rude...! I hate when people do that. They assume just because you're a lil over scale, you can't do yoga or be healthy. So stereotype..!"

Fellow Uber drivers have also spoken out in support of Tess with some even apologising to her on behalf of the company. One wrote: "I am so sorry you had to go through that. I am an Uber driver and I would never, ever say anything personal. Again I'm so sorry, drivers like that give the rest of us a bad name. Thank you for reporting him. He shouldn't be able to drive any person." Another added: "usababe0007 I am so sorry you went through this. It is just really sad that people can not just be nice and decent to everyone. I drive for Uber and would never treat anyone like this."

However, with all online love, comes hate and Tess has been forced to defend herself to many a troll as some people don't believe someone enquiring about your cholesterol - as the Uber driver did - constitutes body shaming. One commented: "Seriously... you're complaining that he's asking if you are healthy but then you're calling him fat?? Yeah, ok." Another added: "Lmfao he's saying you need to watch out from cholesterol! He's fat so he knows! No need to take advantage of the moment to try and promote urself lmao. If u think you're beautiful and not fat then dnt car what anyone else thinks.... someone needs some self esteem smh (sic)."

Clearly frustrated with the controversy the video has caused, Tess has since tweeted: "To everyone that keeps saying 'well we don't know the full conversation'. I say REALLY?! He wasn't 'curious', he was shaming me. End of story."

Do you think this constitutes fat shaming? Let us know your thoughts @soFeminineUK