by Lareese Craig Published on 29 January 2014 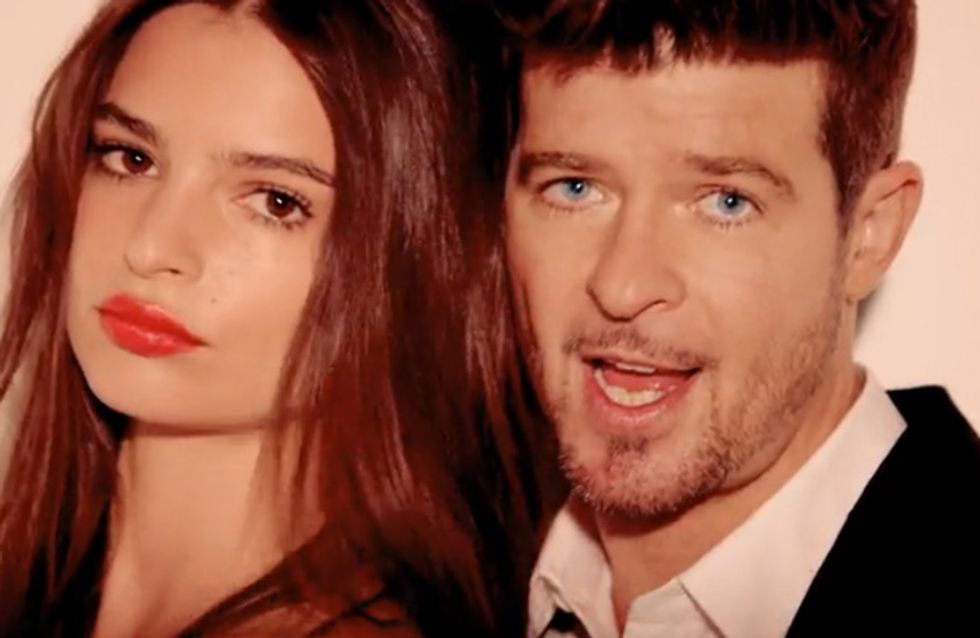 With lyrics like ‘you’re an animal’ and ‘I know you want it’ it’s no surprise people are still riled by Robyn Thicke’s sexist song of the summer. The Blurred Lines video has been viewed more than 257 million times (we can’t think why!) pushing the limits of bare breasticles watching to a whole new level. It was all too much for some of us, including the all-female theatre group who are currently acting out their very own play about it on stage. Now that’s a show we wanna see!

It might have been the floor filler of 2013 but Robin Thicke’s Blurred Lines video is still leaving us hot and bothered in more ways than one.

In case you missed it, the controversial music video sees a host of naked women prancing around, riding bikes and holding sheep (as you do) as they entertain three gawping lotharios. How very creative.

And it wasn’t just the video that caused outrage, the suggestive lyrics such as ‘you’re the hottest b***h in this place’ have been branded ‘sexist’ and ‘rape promoting’.

In fact, more than 20 universities across the UK banned the hit from being played on campus. Ouch, Robin must have his tail permanently wedged between his legs.

Now, an all-female group are taking Thicke’s racy anthem one step further by dedicating an entire stage production to the gender debate. How's that for girl power?

Starring Bryony Hannah and Claire Skinner, Blurred Lines dissects what it means to be a woman today and explores gender inequality in a society where ‘feminism is a dirty word and pornography is inescapable’.

The National Theatre describes it as ‘a fast-paced, razor sharp glimpse of a culture which promised liberation and delivered Robin Thicke’. That's gotta make his eyes water a little.

Are you booking your tickets as we speak? Tweet us @sofeminineUK