by the editorial team Published on 6 October 2015 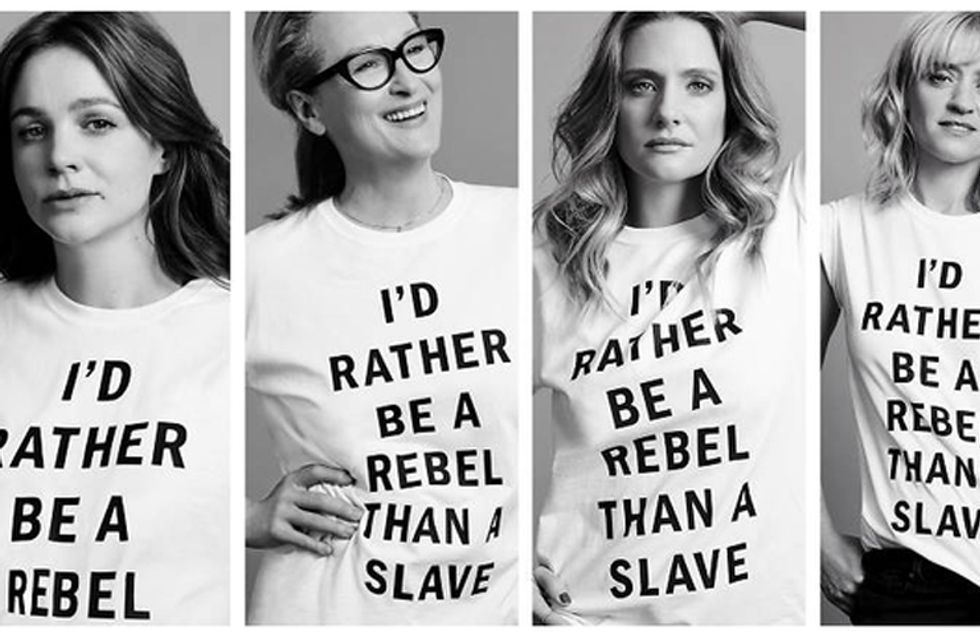 ‘I’d rather be a rebel than a slave’ T-shirt used to promote Meryl Streep's new movie gets attention on Twitter for all the wrong reasons.

To promote her upcoming movie Suffragette, Meryl Streep and her co-stars took part in a photo shoot for Time Out London wearing t-shirts reading "I’d rather be a rebel than a slave." The quote was originally uttered by infamous suffragette Emmeline Pankhurst, who Streep plays in the film, and whilst it might have struck a chord 102 years ago, to say it hasn't been well received by today's audience is to put it mildly.

The film, which tells the story of the early feminist movement for women to have the right to vote in Great Britain, has already faced huge criticism for not including any women of colour, so to then put the quote ‘I’d rather be a rebel than a slave’ at the centre of its promotion campaign adds insult to injury. Many feel it is racial insensitivity as it could be seen as disrespectful to the American history of black slaves.

As a black feminist myself, I have to agree. While the intent is good, the t-shirt is offensive and a poor marketing decision. It's an ignorant move that seems to miss the point that being a slave was never a choice; let's not forget even after the Suffragette movement, black women were still not allowed to vote.

Many people, like myself who are offended by the t-shirts, have taken to twitter to voice their disappointment and disapproval.

White women have said a lot of terrible things over the course of history, doesn't mean you wear it on a shirt. https://t.co/Y02pmmnJCL

#Suffragette. A film that already lacks diversity has the audacity to promote their film like this 😒 pic.twitter.com/EtdM2S5iIA

Sorry Meryl, but these two are the REAL #Suffragette's. pic.twitter.com/0NJ2TuNG0t

No matter how well-intentioned, educated, liberal, when theres only white people in the room, shit like this happens pic.twitter.com/ftTx2ps4y5

What do you think, is the t-shirt offensive? Tweet us @sofeminineUK

Like us on Facebook!
You might also like
100 Quotes About Embracing Change
by the editorial team
by the editorial team
We're Getting A New Poo Emoji And It's The Sh*t
by Helen Turnbull
Funny Sh*t Girls Say That Only Girls Will Understand
by Lareese Craig
'Cellulite Saturday' Is The New Body-positive Instagram Trend Calling Bullsh*t On Beauty Ideals
by Helen Turnbull
What Does Facebook Tolerate More - Nudity Or Racism? The Answer is Depressing
by the editorial team
Is The Victoria's Secret 'Perfect Body' Campaign Sending The Wrong Message To Women?
by Cliche Wynter
Woman Frankly Explains Why We Shouldn't Feel Like Sh*t If Our Boyfriend's Got A Better Body
by Helen Turnbull
Movie Producer Tweets Awful Script Introductions To Female Leads And It's Got Us Cringing
by Pascale Day
15 Reasons Staying In Beats Going Out
by Cliche Wynter