by Pascale Day Published on 25 November 2015 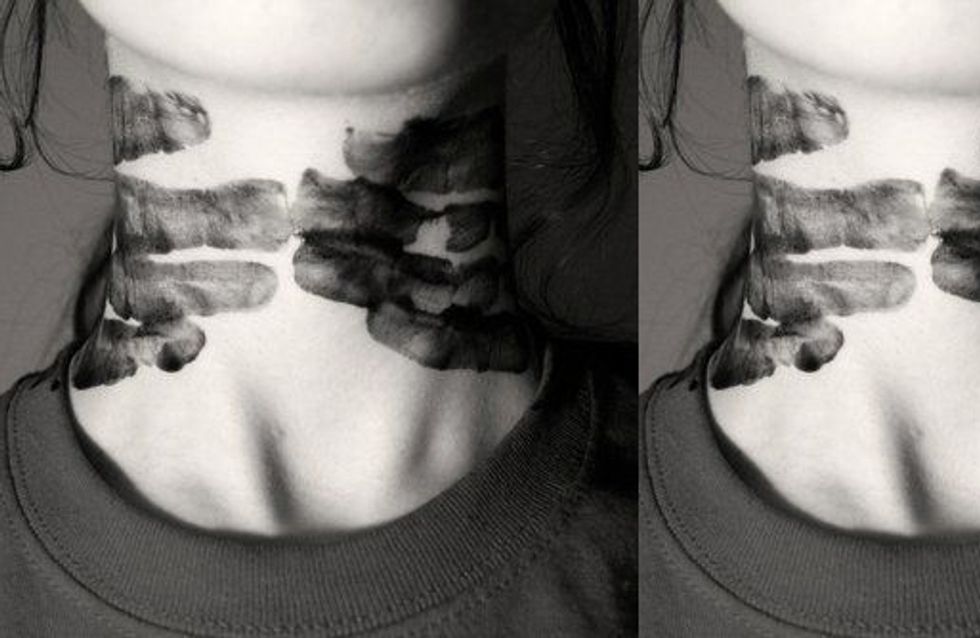 In 1993, the UN General Assembly Declaration on the Elimination of Violence against Women was created to take action against the epidemic. But more than 20 years on UNWomen.org state that 1 in 3 women still experience physical or sexual violence. How can this happen? And what can we do to stop it? Here’s just three examples of how problematic the way violence against women is portrayed, from Ray Rice, to Game of Thrones, to the #sayhername movement. How do we stop it? We attack it at the root.

In 2014, a video emerged on gossip site TMZ of NFL player Ray Rice punching his then-fiance Janay Rice in a casino lift. There were two problematic outcomes from this situation. At the time, the video prompted the NFL to hand Rice a two-game ban. But once the video became public, there was an outcry of people opposing the pitiful suspension term, and the NFL upped it to an ‘indefinite’ suspension period. This move showed the NFL to seemingly dish out harsher punishments solely for the protection of their brand. So when it comes down to public exposure, what sort of message does that send out to women? How can women see this and be sure that they will be taken seriously if they were to report domestic violence? It reduces the gravitas of the abuse if we cannot give a serious crime a serious punishment.

The second issue is, in the aftermath of the abuse, Janay apologised for her role in the situation - a move which she later says was orchestrated by her husband’s team, the Baltimore Ravens. It perpetuates the idea that she was somehow to blame for her husband punching her in the face and knocking her out cold, when it should be known that the responsibility of the attack always lies solely with the attacker. Worse still, for Janay to say it was the idea of the Ravens - a team no doubt made up entirely of men - shows that she was once again silenced, but by oppression rather than violence this time. Not only this, but the whole dealing of the situation from all involved is shown to a largely male audience. These are young men who will see their heroes do bad things to good people and it be justified by people in a position of power.

Popular culture treads such a fine line when it comes to representing domestic and sexual violence. Comedians like Tina Fey and Seth McFarlance make light of abuse with jests about Bill Cosby (Fey) and Rihanna and Chris Brown (McFarlane), which immediately trivialises the subject. Then there’s the exposure to somewhat gratuitous violence against women in shows like Game of Thrones, which elicited the following response from GoT’s Amelia Clarke:

“As an actor, it's bizarre, because you'll relish those dark moments that allow you to get your teeth into a character and really kind of explore the darker depths to the reality of life and things that happen every day. But I think the thing that's important to remember is that, sadly, first and foremost, it's a story that we’re telling that is make-believe — that is based in a fantastical world. So, whilst there is a political commentary that people can take from the show because that is everyone's right to do so, I think not taking it too seriously is kind of the key here.”​

The show has often been criticised for its depiction of rape. And, while we can appreciate that Miss Clarke has to walk a line between keeping her employers happy and speaking out for women's rights, to say that you shouldn’t take it too seriously is a bit of an iffy statement for something so serious.

​On the other end of the spectrum, rape can be ignored altogether. The NWA biopic Straight Outta Compton completely omits the assault against two women allegedly committed by Dr Dre. Whilst he has previously addressed these claims, admitting that some of the allegations are true and he’s “made some f*cking horrible mistakes in my life,” these ‘horrible mistakes’ are missed out of the film entirely, most likely because Dre serves as producer on the film. By denying this screen time is denying the legitimacy of the women whom he assaulted.

Violence against trans women and women of colour

Violence against trans women and women of colour, has become something of an epidemic. In August, I wrote that 16 trans women had died in America so far this year; that number has now risen to 22 as of today. #Sayhername is a campaign that stems from the #blacklivesmatter movement, and aims to amplify the stories of black girls and women who have died at the hands of police. It is intrinsic to International Violence Against Women Day, because here's the thing: slogans like “don’t shoot” and “I can’t breathe” have become more synonymous with the deaths of black men, whilst the deaths of black women are largely responded to with silence in comparison.

​For example: Reika Boyd, a young black woman, was shot in the head and killed by an off-duty Chicago Department police detective in 2012 despite being unarmed. He was charged with four counts of involuntary manslaughter, reckless discharge of a weapon and reckless conduct. This year, all charges were dismissed in the case on a technicality. Trans woman CeCe McDonald served a murder sentence when she stabbed a man in self defence after he launched a racist, transphobic attack on her as she walked to the shops. She served a sentence for murder in an all-male prison. You never hear about these women, and yet their stories are so important. Their stories need to be spoken about, shouted loud, because this truly is a growing problem and the bigger it gets the quieter they are rendered. The issue with state violence against women of colour and trans women is that, if police sit at the top of the hierarchy structure, it delivers a universal message that these women don’t have worth. This encourages people to attack trans women in the street simply for being trans, or black women simply for being black. The death of black women and trans women cannot just be a 'thing that happens'.

What can we do?

​First of all, the thing to remember with abuse, both domestic and sexual, is it’s not our fault: we haven’t done something to deserve that kind of treatment. I also feel it’s important to say at this point that women are not the only victims of violence. Men can also experience domestic and sexual abuse from women, and it’s not as widely recognised. (For example, in Australia £100million was designated to helping women facing domestic abuse. £2million of that amount was put towards men, but not victims - it was for offenders to stop them reoffending.) We need to recognise men can also be victims and encourage them to talk without being interrupted by outdated stereotypes and prejudices.

So, what can we do for women? A few ideas have been suggested: Jeremy Corbyn thinks women-only carriages could be the way forward; whilst in Colombia, the idea of giving men a curfew is being toyed with. But the answer could be simpler than that. Violence against women is based on gender stereotypes and our roles in society, which is why we must tackles it at its roots. We need to start teaching children about gender equality and respect from a young age. UN Women say that the key to prevention is “by educating and working with young boys and girls promoting respectful relationships and gender equality… While public policies and interventions often overlook this stage of life, it is a critical time when values and norms around gender equality are forged.”

We also need more role models for men. We have women like Katie Piper, Malala Yousafzai and Laverne Cox who prove that you are more than just a victim, that you can be who you want, that you have worth, and that you can continue with a better life after domestic violence. But it's men who need better role models. These can come, not only in the form of people, but of institutions. In the case of Ray Rice and the NFL, Rice is just one out of 85 NFL players that have been arrested for domestic-related violence, whilst only 11% of those have received suspension. What kind of message does that send? An appropriate punishment for offending players would show that they believe in the worth of women. The NFL know their power and influence, and so they should acknowledge that they have an opportunity to become teachers in showing how to handle aggression on and off the pitch, educating not only their players, but the public.

Women affected by violence have a voice and, no matter how quiet, we need to listen to their stories so we can make a change together. These conversations are uncomfortable, and painful, but necessary. It needs to be a discussion that doesn’t stop after today, or after the next woman who dies hits the headlines. We need to make ourselves heard continuously, above the noise of everything else, because you matter, and I matter. We as women matter, and that’s all there is to it.​​

What do you think is the best way to tackle violence against women? Let us know: @sofeminineUK

This article was written by Pascale. You can follow her here: @Pas__​