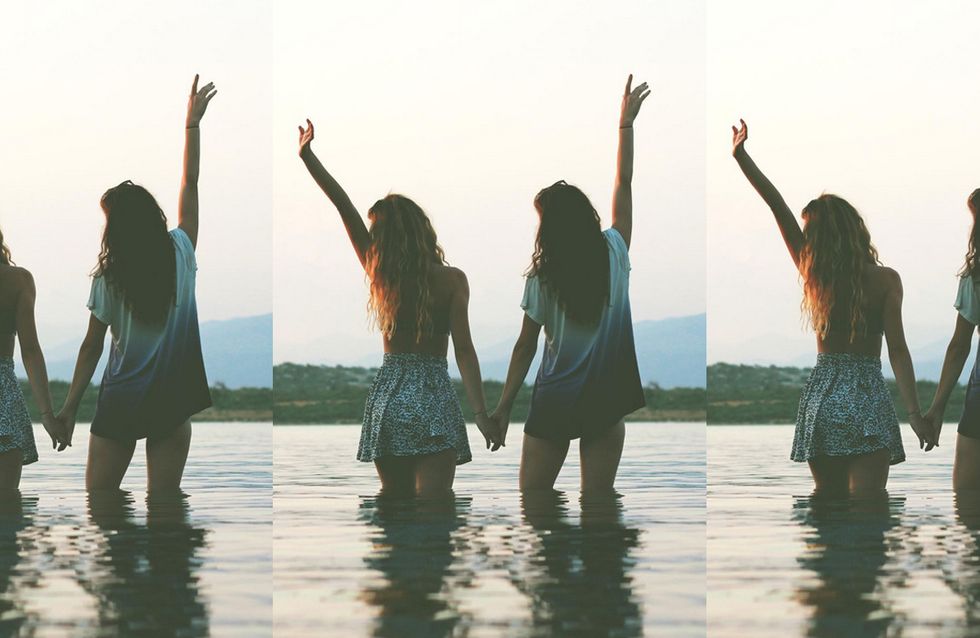 I’m proud of us, ladies. It’s 2017, and we have come so far in our fight for equality. We’ve done a great job in our roles as feminist goddesses, and I reckon Emmeline Pankhurst would be pretty impressed. But unfortunately, there’s still so far to go. New problems arise and old ones stick around, and it’s down to us to sort ‘em out. In the name of International Women's Day, here’s some problems, old and new, that we’re continuing to fight way longer than we should be.

1. Catcalling is still happening and it never stops being effing awful

Urgh. Being catcalled is the absolute WORST. Is it too much to ask that we be allowed to walk down the street without some guy shouting at us from the sidelines, telling us how much he likes our tits, following us half a mile down the road and then shouting about how ungrateful we are and that we should be able to accept a compliment. Please stop guys, seriously. You all sound like pervy uncles. Even if you wanna ‘compliment a girl on her necklace’, maybe say it to yourself in your head and ask yourself a series of sensible questions, like ‘do I sound creepy?’ or ‘am I going to make this girl feel uncomfortable?’ The answer to these two is 'yes'. Unfortunately, some men still have a lot to learn about street etiquette, and it's up to us to educate them in a little class I like to call 'How Not To Be A Douche 101'.

2. Abortions still aren't legal everywhere in the UK and Ireland

Roe v Wade happened in America 42 years ago, and changed the landscape of feminism by affording women the right to choose independence and a job other than 'housewife'. However, in 2016 abortion is still a pretty tense subject - no thanks to the continued efforts of anti-abortion groups who use scare tactics to try and dissuade those wanting or needing an abortion from following through with their decision.

3. Pregnancy Discrimination is still a thing in some places (yep, seriously)

These days, we get pretty good maternity and paternity leave, which most companies let you split how you wish with your other half. But, amazingly, discrimination in the workplace with regards to pregnancy still happens. Still.

​Luckily, the situation landed the firm in a lawsuit in which the woman in question was awarded nearly €11,000 in compensation for discrimination.

4. Pissed off men STILL moan about there not being an International Men’s Day

Only, THERE IS. This year, comedian Richard Herring spent his International Women’s Day tediously telling an assload of embittered people on Twitter who felt that IWD was ‘sexist’ that yes, there is an International Men’s Day, so don't worry. It’s in November. You can google it.

​IMD also attempts to promote gender equality, and improve gender relations - of which all those offending Twitter folk probably need a good education in. The problem is, the importance of International Women’s Day is stifled every year by those using the hashtag #meninism and moaning that it’s sexist that women have their own day whilst they, the middle-aged white men of the world, do not get the same kind of privilege. The irony of course lies in the reason why we need an International Women’s Day in the first place.

There are actually more women than ever in formal paid work and we currently make up around 40% of the global workforce. Which is amazing, considering the distance we’ve come in 100 years. But it’s still not good enough.

​The pay gap continues to close in, but we aren’t there yet: a recent study by the International Labour Organisation (ILO) of 83 countries found that women earn 10-30% less than men. According to the ILO, the present trend indicates that it would take another 75 years for equal pay to be achieved. Which is only slightly depressing.

6. Girls are being overly sexualised by the media

In order to explain this point, I’m going to need the help of kid wizard and all round lovely guy, Daniel Radcliffe:

And that, my friends, is what we are dealing with. The sooner this changes, the better.​

So. Instagram wont let us show our nipples, huh? But men can show theirs. Sure, that makes sense…. NAT. Hundreds of censored boobs and an awesome #freethenipple movement later, and Insta still won’t budge on their No-Nipple policy, which applies to ladies only.

Photos of post-mastectomy and women actively breastfeeding is ok, says the photo giant. But, for example, a picture of my nipple just hanging out, being cool, would be an instant take-down. For this my nipples, as I’m sure everyone else’s do, are feeling extremely rejected and discriminated against.

So why are we not allowed the same nip privilege as men here? Instagram cite “safety reasons” for the need to exclude the lady nipple from the types of nipples you’re allowed to see, but men’s nipples are A-ok. Which is why people chose to highlight the ludicrous nature of the ban by using photos of male nipples to cover their own in the photographs. Just let our ta-tas run free already Instagram, for crying out loud.

This one was reported again. So here it is with two MALE NIPPLES stickers that I put on to cover my illegal FEMALE NIPPLES! So now you can't say shit, this is so fucking wrong and this is not equality. #malenipples #freethenipple #freethenipplecampaign #freethenipple2015 #female #femalenipples #my #body #natural #fucksexism #sexism #feminist #feminism #bw #covered #with #nipplestickers #tydligen #buzzfeed ! @freethenipple

8. Women still struggle to get into power jobs

GAH. These glass ceilings appear to be made of bullet proof glass. Because no matter how close we get to it, it seems impossible to break. As Sheryl Sandberg said in 2013: “Women are not making it to the top of any profession in the world.” And she would know, being the chief operating officer of Facebook and all. Further up you may remember we said that more women are in work than ever before, which is awesome. But the amount of women rising to the top remains relatively low, which suuuucks. Even the highest positions are hard to get for us ladies: only seven of 150 elected heads of state in the world are women, and only 11 out of 192 are heads of government. It's nothing short of depressing.

9. Slut-shaming and rape culture is ever prevalent, and it’s so worrying

Slut-shaming continues to be a huge problem, especially when it comes to rape culture. On 7th April 2013, a 15 year old girl called Rehtaeh Parsons committed suicide. The cause for her suicide was that she had endured more than a year of relentless taunting and humiliation after a picture her reported rape began circulation on social media. When the case went to trial, the man who shared the picture, which he was also in, walked free. This is one of the worst cases of slut-shaming and shows the ugly nature of rape culture.

​Slut-shaming and rape culture culminates itself in the blaming or disbelief of a victim. But slut-shaming regularly seeps into our everyday lives, and sometimes it goes almost completely unnoticed: high school writer Sabrina Nelson says that she regularly hears her peers at school - both boys and girls - calling girls ‘sluts’ without seemingly knowing what they’re saying, unaware of its impact.

​Today, the act of calling someone a ‘slut’ is a form of subjugation that relegates girls into a certain role or position or personality without, it seems, the flutter of an eyelid. It is a culture that blames a victim and identifies with the assailant. It berates a victim for what they wear, or how much they drink. “She was asking for it” is the tagline of rape culture. It's the act of of passing sexual harassment off as 'banter'. It's all these things combined that stop victims reporting rapes, and cause suicides like Rehtaeh Parson’s. It’s hard to cover the importance of what opening a dialogue can do for these victims in so few words, but it is the first in many important steps that we must take in order to eradicate such issues.

10. Last but not least, to get anywhere we NEED to get rid of White Feminism. Like, right now.

Now, this can get a little confusing, so bear with me. White Feminism is feminism that ignores intersectionalism. However, that’s not to say that all feminists who are white are White Feminists, but most White Feminists are white. Confused yet?

​White Feminism is an umbrella term for a group that not only excludes race, but basically excludes all those who are not white, straight or cisgendered (the opposite of transgender). White Feminism is a shitty thing because white people don’t have to think about and deal with things like their race on a daily basis. For example, at the moment trans women need feminism more than ever: as of 18th August, 16 trans women have been killed in America so far this year, the majority of them black. These are the women that need to be included in feminism and, for the most part transgender women’s rights are seen as a natural extension of feminism. Yet some feminists still refuse to accept trans women into feminism, refusing them space on both a physical and intellectual level. (Yeah we’re pointing at you, Germaine Greer. And you, Gloria Steinem. You guys used to be cool.)

Women who are not cis do not experience misogyny in the same way that white women do. We have to remember this, support those who desperately need a voice more than us, provide them the space they deserve, invite them onto our platform and take care not to silence them.

Whilst we have made strong strides towards equality, we still have a long way to go. The road may be rough, because feminism is not without its imperfections and complications, and sometimes it'll feel so shitty and you'll want to give up and just go watch Netflix for the foreseeable future. But even the smallest of steps can make the biggest of impacts.

It's all very well to highlight how flawed this world can be, but it's the ones who take that information, ask how we can change it, and make that happen that matter. Get talking, engage in the debate. Grab a seat and lean in. Don't give up ladies, because equality will be so worth it.

Get involved in Women's Equality Day! Tweet us with what you're up to today: @sofeminineUK

This article was written by Pascale. You can follow her here: @Pas__

No More Miniskirts! 6 of the Craziest Laws against Women’s Rights Worldwide