by Lareese Craig Published on 3 December 2015 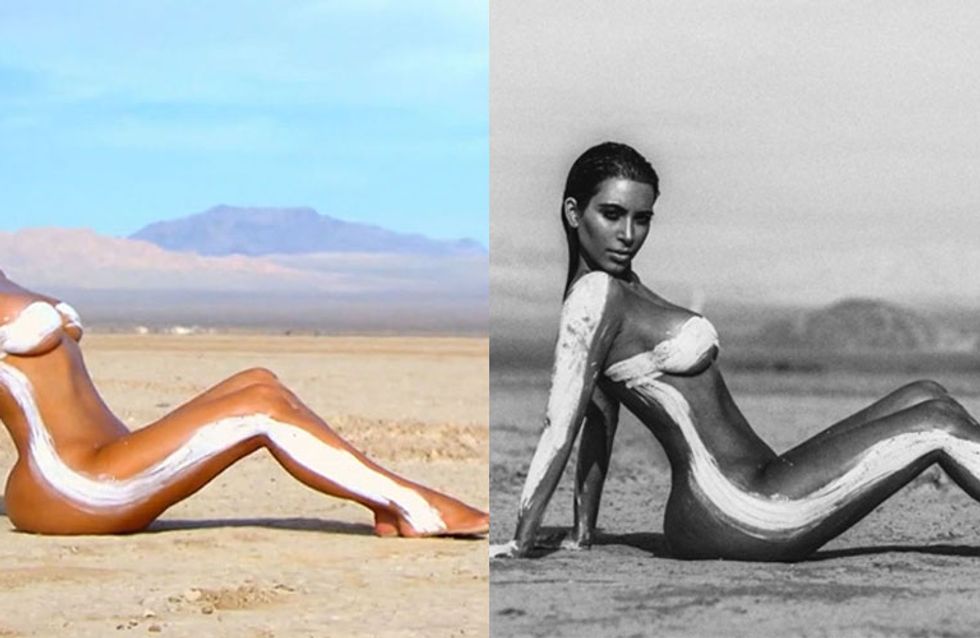 Remember that nude desert photoshoot Kim Kardashian did, the one where she's wearing nothing but white body paint? Well... about that. One eagle-eyed photographer whipped up a quick side by side comparison of the image Kimmy plastered over her social media and the one that aired on KUWK and apparently, they're a little different. Photoshop has a lot to answer for.

Yesterday, little sister Kylie was making headlines about her questionable use of a wheelchair as a fashion statement in her photoshoot with Interview Magazine, today it's Kim Kardashian's turn to be controversial.

Several months ago, Kim did a sultry, nude photoshoot in the middle of a desert and everyone was immediately dropping the OMGs over her flawless appearance.

But one Twitter user was quick to notice a few discrepancies between the version that aired on Keeping Up With The Kardashians and the image Kim posted on her social media account this week. Busted.

LOL @ all the photoshop tho RT @KimKardashian 📷 @keslertran pics on my app tomorrow #FinallyReleasingThisDesertShoot pic.twitter.com/eEi6tSHZWR

In the black and white image, Kim's waist, stomach and face all appear slimmer than in the footage shown on KUWK back in May. Ok, so Kimmy clearly used a little retouch here and there, what's new?

Well, other than the whole body image argument, the big deal is this. Kim had previously said the reason she did the nude shoot was to embrace all of her insecurities - including her psoriasis - but in light of the Photoshop controversy, it seems that was all a classic case of BS.

Oh Kimmy, if you're reading this: you're beautiful, this is your time but maybe next time just don't be all uncool and stuff.

What do you think of the desert drama? Should we all cut Kimmy some slack or do you think she needs to take responsibility for fuelling unrealistic beauty ideals? Tweet us @sofeminineUK!

Kylie Jenner Slammed For Using A Wheelchair As A Fashion Statement