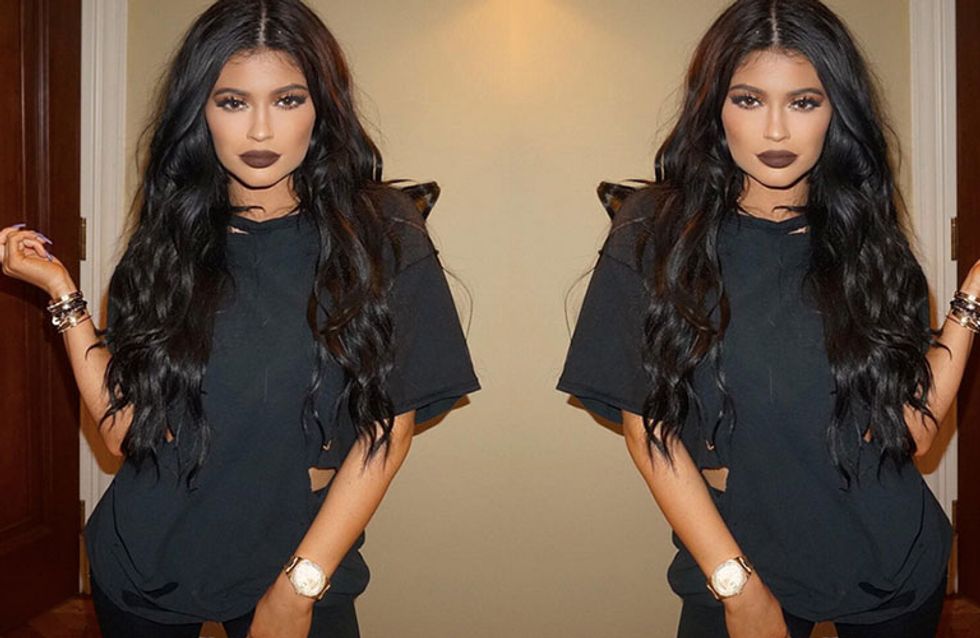 We can finally get that little bit closer to the Kylie Jenner pout and *newsflash*, it doesn't involve making out with a shot glass. Miss KJ's officially launching her own lipstick line later this year and if the first shade's anything to go by, it's gonna be the hottest makeup must-have of 2015. To celebrate, here's 10 times Kylie Jenner gave us major makeup goals.

That's right, the pout perfect Kylie Jenner is adding beauty buff to her list of accolades with her very own range of lipsticks. How long have we been waiting for this moment? A shot glass too long.

She spurred speculation about the lipstick line by posting a not so cryptic, may we add flawless, pic on her Instagram alongside the caption: 'Brown lips #KylieLipKit stay tuned'

She's already dabbled into the beauty industry as the ambassador for Nip + Fab, but with her on fleek contouring and lip lining skills we're not surprised Kylie's decided to move onto makeup. Here's 10 times she have us major makeup goals!

1. That time she made brown lips happen

After seeing the punchy brown shade, we're excited to see what other colours the Kylie Jenner lippy range will include. Ruby Woo you better watchya back!

2. The time she did blue contacts and peachy peepers

In our next life we want to come back as a Siberian husky pup. Those eyes!

3. The time her eyelashes were perfectly fluttery

Meanwhile, we're stuck here dealing with all five of our stubby, claw-like lashes.

4. That time she did kitty flicks and vampy lips

Taylor Swift's flicks ain't got nothing on these felines.

5. The time she strobed her nose

And had amazing luminescent blue hair to match. She's usually an always matte kinda girl but she's not afraid to change things up and experiment. Which obvs make us appreciate her face art even more.

6. The time she did a nude lip like no other

7. When her brows peaked

8. When she showed us how to bake

Whenever there's a new trend, she is all over it and if KJ's using it, you know it's legit. The newest way to keep your concealer from sliding is to 'bake' it in place for 5-10 minutes with translucent powder and then dust it off your face, leaving a creaseless, stay-put base.

9. When she made green lippy totally wearable

She's basically a living mermaid and proof that teal lips are not just for Halloween.

10. When she showed the world that she woke up like dis

And to think she's just as flawless without it all!

Cinderella Lips!? We Put The New Lip Fillers To The Test

The Ultimate Guide To What Colour Make-Up Suits You

by Lareese Craig 187 shares
From hair ideas to outifts, look no further for your daily inspiration