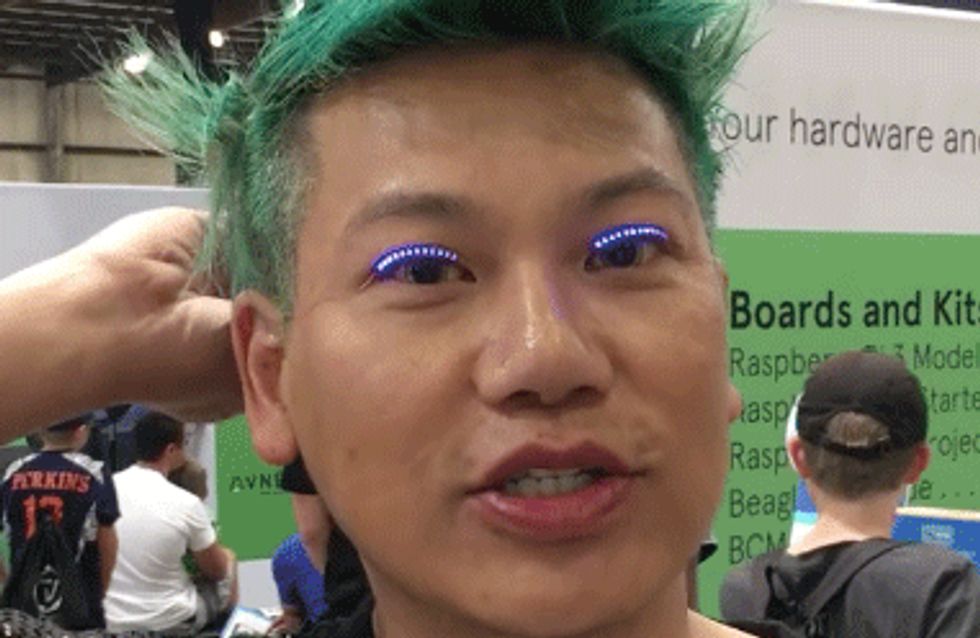 They say the eyes are the window to the soul, so why not go the whole hog and light them up like a tree at Christmas to really draw them in? Yep, we've now been blessed with the latest lit invention on the beauty market, meet LED light eyelashes, AKA the eye wear we never knew we needed. But will they be the next big thing or just a faddy party trick?

Hands up who, after all these years, is still yet to nail applying false eyelashes correctly? The struggle is real guys. It's near on impossible to stick them close enough to your natural eyeline so that they look natural (ish) and well enough so they don't peel off half way through the night, and leave you looking like you went ten rounds with Mike Tyson on the way to the loo.

But someone who thinks they've found the answer to our eyelid wig woes (and then some) is Arduino designer Tien Pham, AKA the brains behind the light up lashes known as 'f.lashes'. He's launching a kickstarter campaign to fund his unusual idea.

The best thing about this lit invention is their interactivity - if you tilt your head left and right, they flash in time with your movement. They also have a dance mode so when you're showing off your best twerk, they flash along to the beat, improving your Beyonce impression tenfold. There's also a sparkle mode, lighting up your peepers as bright as the fir at Christmas.

All flashy features are controlled by a switch you wear at the back of your head. Now you may be wondering how these little beauties solve the aforementioned problem of our lashes coming off mid-boogie, well that's sorted thanks to a strap worn around your head holding the lashes and the switch in place. Ah, knew there was a catch. Subtle these are not.

Could lit lashes spell the end of sticky strip dramas, and replace our beloved falsies as our night out go-to? Or are they simply a one hit wonder? Either way there's no doubt these would make an impact on your next Tinder date.

Would you ever try out these lit lashes? Let us know @SoFeminineUK!

DIY Rainbow Eyelashes Are Here And They're Festival AF

Toilet Paper Lip Art Is Here & It's Anything But Turd