Home / Beauty / Make up / This Teen's Mum Disowned Him For Wearing Makeup, And The Internet Came To His Rescue

This Teen's Mum Disowned Him For Wearing Makeup, And The Internet Came To His Rescue 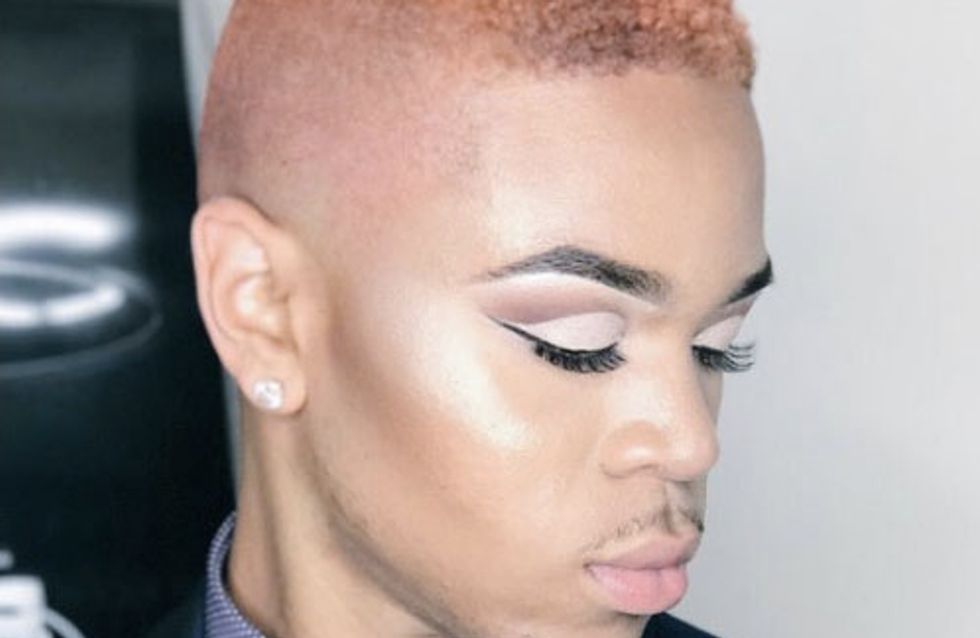 Get those tissues ready chaps, because this story has all different kinds of layers that'll make you sob. This is the world wide web at its absolute best: when Jauan Durbin was feeling down and out, the internet had his back - and, it turns out, he had theirs.

There are two types of people in this world: the ones with the gift to apply a flawless face of makeup, and the ones who have to watch the YouTube videos of the first group in order to apply eyeliner and not look like a Picasso painting.

Jauan Durbin is in the former group. The 18-year-old is a pro at the makeup game. But there was one person who wasn't happy with his look, it was his mum. In a tweet, he posted a screenshot of a conversation he had with his mum, who didn't care for a pic of Jauan with makeup on.

"I do not approve of this bullshyt," she texted Jauan. "Wth is wrong with u. I am so disappointed. U are a male wth do u have on eyelashes, eyebrows and make up. I'm completely done."

Lol, this hurts. It really does. But I'm going to live in my truth until the day that I die. pic.twitter.com/qXdzdnfJ1n

Jauan, showing way more strength than we could, captioned the pic: "Lol, this hurts. It really does. But I'm going to live in my truth until the day that I die."

And what seemed like a sad tale, soon turned around once the internet got involved. Jauan said, "I want to cry man. My mom ain't disappointed in me because I'm on the streets not doing anything with my life. She's disappointed because I have on makeup. I'm in college. Heavily involved in Student Government and bettering myself and my community. And she's disappointed in me because I have on makeup because she feels makeup is only for women. I'm sick. I've never felt like this."

But the tweet soon had over 15,000 likes, and people began DM-ing Jauan their stories of disownment from their parents who couldn't accept who they were. Plus, the comments on it are cute enough to melt even the iciest of hearts. Check these out:

@PrinceJauan how could anyone be disappointed w a highlight & cut crease like that 😪 on a serious note don't be discouraged, stay you 💖🙏🏾

@PrinceJauan i am so so SO sorry, Jauan. if you ever need to talk or otherwise support, just drop me a line. *hugs*

@lanaisborntodie @PrinceJauan Everybody deserves to be happy, nobody should be disrespected for what they like/ value

Then Jauan received support in the shape of a delicious little MAC package from the cosmetic brand themselves, who sent him so many product that he'll have looks to tweet for daaaays.

And the happy ending to this story? His mum seems to have come around to to accepting Jauan for who he is, too: "My mom has seen everything that's going on and realised that I was kinda getting hurt by it," he told Refinery29. "She's affirmed me and told me that she was just nervous about what people would perceive me as because of the makeup."

One thing is for sure, though - Jauan sure knows how to glow - both inside and out. Now let's all follow him so we can catch his MAC tutorial as soon as it drops.

This Beauty Blogger Wants The Internet To Stop Makeup Shaming