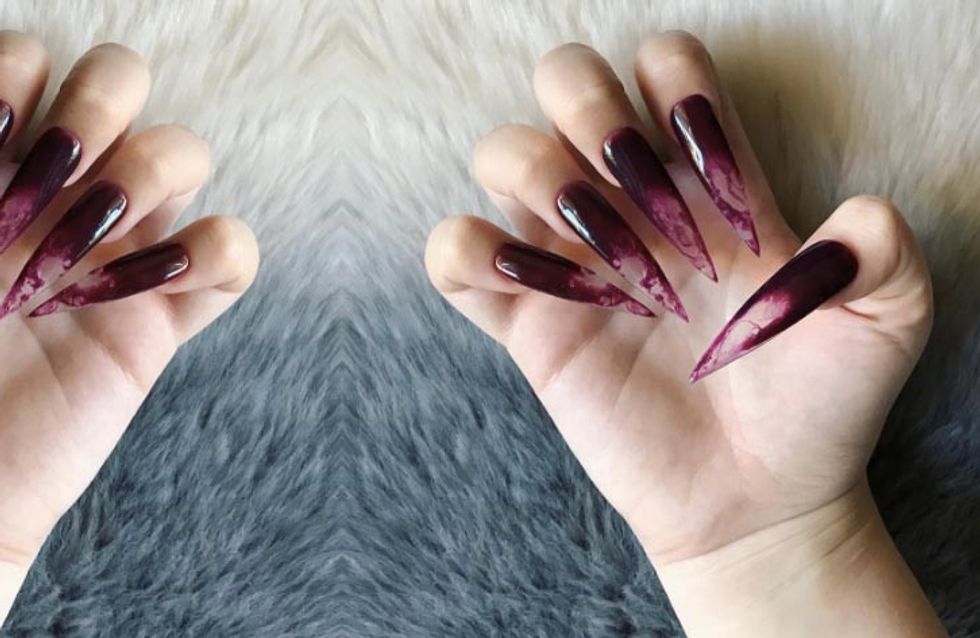 Goth chic has never really gone out of fashion, but now the mani parade have taken this obsession to new, dark heights. The vampire fang nail trend is exactly what it sounds like: sharp pointy nails that look like the terrifying teeth of a vampire. We're not scared, you're scared! You're the scared one! (But seriously stay away from me with these nails please) *Shudder*

As we have long learnt from film and television, there's literally nothing sexier than a vampire. They are ridiculously sexy. Christopher Lee's Dracula? Yes please! David Boreanaz's deliciously brooding Angel? Ding dong! Edward Cullen in all his sparkly glory? Yes, yes, a hundred times yes.

The most underrated part of a vampire, though, is not their love of night-time or their ruthless desire for virgin blood - it is their propensity to grow really long, pointy fingernails. It didn't take long for us mani fans to catch on to this love of super long talons but honestly, who knew that in 2017 we'd be taking manicure tips from Nosferatu? It really is a crazy world, people!

This latest trend involves taking your falsies and sharpening them into an extreme point. The longer the better. The pointier the better. Kinda like how a vampire slayer would sharpen a stake. The aim here is not to be able to actually do anything, it is just to have super long, dangerously sharp nails. So if you had plans, like texting your friends or going to work or trying to eat anything, then you'll have to postpone. Scratch them out of your diary for the next month, because you're not going to be able to do anything. Seriously, if you ever wondered why vampires lie down with their arms folded across their chest, it's because that's the only way they can relax without scratching the absolute sh*t out of their milky white skin. In fact, maybe the only thing you're going to be able to do is go out and show these bad boys off, and really? That ain't the worst thing. Check out some of our fave vampire manis below.

Would you get a vampire fang mani? Let us know! @sofeminineUK