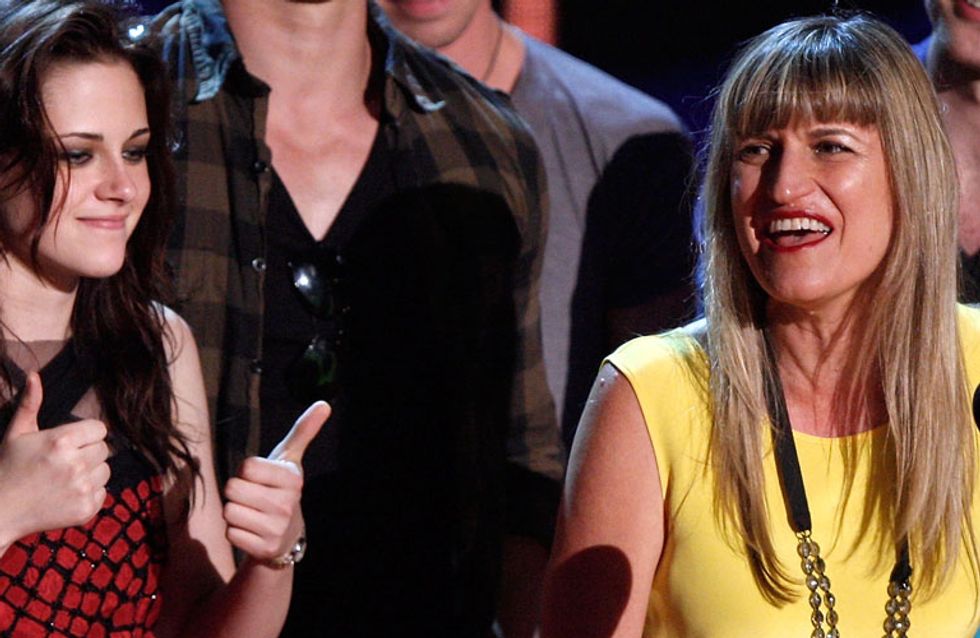 Whether you're a self-proclaimed feminist or not, females gotta support each others' creative voice. A not so fun fact: only 6% of movies in the top 250 movies of 2013 were directed by women. So maybe women just suck at making movies? Wrong. Here are some of the greatest famous films that have been created by women, and trust us you'll be surprised by what's on the list.

Twilight star Kristen Stewart (aka KStew), made an excellent point in an interview last week when she discussed feminism and the lack of female directors in Hollywood. If you think of some the "best" directors of our time: Spielberg, Scorsese, Woody Allen, Quentin Tarantino, etc. they have one thing in common: THEY'RE ALL MEN.

The good news is there are also a lot of amazeballs movies made by women. And we're not just talking rom coms, we're talking real, groundbreaking films. So in honour of KStew's courageous comments we've decided to give some of our creative sisters the shout out they so greatly deserve.

That's right, this violent movie about a Wall Street sociopath just so happens to be directed by a lovely Canadian woman named Mary Harron. She's a mother of two who didn't make her directing debut until the age of 43. She also happened to attend a shabby University you've probably never heard of (Oxford). She's a former music journalist who helped to start one of the first punk rock magazines called Punk. Rock on, Harron.

This thriller, based on the real-life hunt of Osama Bin Laden, was created by none other than Katheryn Bigelow, who is a resident badass. She also directed the hard-hitting military drama The Hurt Locker, which made her the first woman EVER to win the Oscar for Best Director, beating out her ex-husband James Cameron who was also nominated in the category for Avatar. That has got to be the sweetest breakup revenge EVER. She's a critically acclaimed painter and six feet tall. Oh yeah, and she's HOT. Like I said, she's a badass.

This Oscar winning movie was directed by film royalty. Sofia Coppola is the daughter of world famous director Francis Coppola who won numerous Oscars for his Godfather series. Oh and she's cousins with Nicolas Cage and Jason Schwartzmann. She was the first woman to ever be nominated for Best Director and used to be married to famous director Spike Jonze. She not only has a wine named after her (her dad Francis now runs a vineyard), but also has a Marc Jacobs bag named after her called the The Sofia Bag. It's cute as sh*t, just like Sofia.

Party on Wayne! This comedy classic just so happens to be directed by Penelope Spheeris who also directed The Little Rascals. She's the oldest of four kids and had to raise her younger siblings after her dad died. She's from New Orleans, USA and was studied psychobiology at University, which is the study of the brain's interaction with the outside world (duh). She said her real joy in life is making independent documentaries on heavy metal rock. Needless to say she's a woman of many talents.

Who knew a woman could know so much about the anxieties of a boy waking up as Tom Hanks? Penny Marshall did. This female dropped out of college after getting pregnant unexpectedly and then started her acting career. Although she did star in a dandruff commercial with Farah Fawcett, her real break came when she directed Big and then A League of Their Own in the late 1980's. She's a huge fan of needlepoint and is godmother to Princess Leia's daughter. Much like J Lo, she's never forgotten where she came from: the Bronx.

This woman is the queen of animation. Vicky Jenson not only directed Shrek (which won Best Animated Feature), but also the amazing Fern Gully. She started out as a cartoon cell painter for Marvel and Disney and ended up directing films instead. She now does production design for DreamWorks. Rumour has it she's also obsessed with border collies, so what's not to love?

This legend does it all: writes and directs. Kimberly Peirce wrote and directed the Oscar winning Boys Don't Cry and also the horror film Carrie. She also happens to be brilliant: she studied English and Japanese literature at the University of Chicago and also went did her post-graduate studies at Ivy League super University Columbia. She used to be a photographer in Japan and is married to a gender studies professor. Also, girlfriend can rock a tux, please see below.

In addition to being a crazy talented writer and director, we have Debra Granik to thank for one of our key moments in history: only the discovery and birth of the EPICNESS that is Jennifer Lawrence and her acting skills. Her standout film Winter's Bone is dark and wonderful and was nominated for Best Picture. She's so talented she won Best Short Film at the Sundance Film Festival WHILE SHE WAS STILL A FILM STUDENT. She's from Washington D.C. and majored in politics in college. She said her major led her to start making films for trade unions that were educational. Chick is brilliant.

This film, which won Charlize Theron an Academy Award for her portrayal of the serial killing prostitute Aileen Wuornos, put Patty Jenkins on the map as she both wrote and directed it. She worked with Wuornos leading up to her execution in order to get the film's portrayal of her as accurate as possible. Upon her execution, Wuornos left Patty all of her personal letters. Woah. Her dad was a silver-star-decorated F4 fighter pilot in Vietnam so she grew up all over the map, but got her degree in NYC at Cooper Union. Don't let her smile fool you, she also directed the cult murder show The Killing, I would not mess with her. Also, I want to know what conditioner she uses, her hair always looks FAB.

Any of your favourite movies directed by badass women? Tweet at us @sofeminineUK!