Mysterious novels with dark, untrustworthy characters and an ambiguous narrative are the sort of novels that you could stay up all night reading. Novels that keep you guessing and a little afraid are always the ones you can't help but gush about in the office the next day, so Sofeminine has gathered together the top murder mystery/thriller novels that you are BOUND to love... 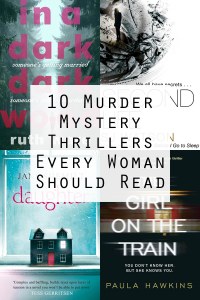 1. A Game For All The Family – Sophie Hannah

After moving away from the chaos of London, Justine and her family settle down in Devon. However, after a few months of their new life, Justine notices a change in her daughter. Once bright and enthusiastic, she has become withdrawn, moody, and obsessed with writing a story about a murder that took place in her bedroom. Then the phone calls start...

Why you should read: Sophie Hannah is a renowned crime writer, most specifically since her novels have twists you didn't see coming a mile away. Whilst her crime capers usually include the same group of Detectives and what is going on in their personal lives, A Game For All The Family is a standalone novel and a seriously creepy one at that.

​Nora hasn't heard from her best friend, Clare, from school in over ten years after she left her life abruptly and under mysteriously circumstances. When she is invited to Clare's hen party in the middle of nowhere, she decides to go and attempt to rebuild their relationship. Unfortunately, someone else has other ideas...

Why you should read: There is so much to set up the scene here and make you feel deeply uneasy - from the creepy glass house in the middle of nowhere to Clare's edgy friend Flo, to the occasional flashforward after something terrible has happened. You'll be so desperate to find out exactly what went down you'll be reading it under the table at work.

Maud, a pensioner suffering from dementia, tries to work out what has happened to her best friend Elizabeth who has gone missing, and all the while slowly uncovering the truth to an unsolved mystery from decades earlier.

Why you should read: This is a murder mystery novel like no other as you follow the story from Maud's perspective, and she soon becomes the epitome of an unreliable narrator, repeating herself and missing gaps in time, but this just makes the truth about the mysteries that are entwined together all the more compelling.

Gillian Flynn hit the BIG time with her smash hit novel Gone Girl, but did you know she had two books already under her belt? Sharp Objects is Flynn's debut novel, a creepy murder mystery that follows the seriously damaged journalist Camille as she returns to her hometown to cover the murder investigation of a murdered pre-teen girl, who has been found stranged with all of her teeth removed.

Why you should read: It isn't just the murder that is gruesome and dark in this novel. Camille's mental illness, her seemingly perfect half-sister and Stepford housewife mother all make for an awesome read.

5. Girl On A Train - Paula Hawkins

Unhappy alcoholic Rachel always looks into a house on her daily commute to London and imagines the lives of the seemingly perfect couple who live there. So when she sees the woman with another man, then a report that she has gone missing, she finds herself being drawn into the case with knowledge that perhaps nobody else knew about.

Why you should read it: Written from several different points of view, you never know quite who is in the right or exactly what has happened until it all becomes crystal clear.

Jenny is devastated when her daughter Naomi goes missing at age 15. As she begins to investigate her disappearance, she realises that there was so much more going on with her daughter than she had even begun to realise.

Why you should read it: It's a question you can't help but asking yourself: how do we really know what's going on in our loved ones lives?

Cormoran Strike is a gruff, veteran detective who looks into the death of a young celebrity Luna who's death was ruled as suicide after falling from a building, but her brother is determined that she didn't do it.

Why you should read it: Forget Cormoran (though he's amazing). His assistant and receptionist, Robin, who secretly adores detective work and her job as Cormoran's PA, is freaking awesome and exactly the kind of detective we can get on board with.

Kate is distraught when her only daughter, Amelia, seemingly kills herself after being suspended from school. However, when she receives a text that simply reads: She didn't jump. From there, Kate becomes obsessed with finding out what happened to her daughter in the weeks leading up to her death, and finds out there was more going on than she'd ever imagined.

Why you should read it: It's beautifully written, the story is fantastic and you genuinely don't see the truth coming.

A YA fiction about Cadence, a teenager from an extremely wealthy family who, after a particularly traumatic head injury, suffers badly from migraines and amnesia from the night she was hurt. All she knows is that it was on the island where she, her cousins and their friend have spent every summer since they were little, and the only way she can remember is if she goes back there one more time.

Why you should read it: This is a small and fast-paced book so if you're a quick reader, you might even finish it in one sitting, and it is as disturbing AF!

After the death of her younger sister, Julia is devastated that they never caught the person who did it. Suspecting that Kate met her death at the hands of a stranger she met on an online dating site, Julia tentatively goes onto the site to look into who could have killed her, and finds herself drawn in and growing increasingly more obsessed with a handsome stranger. Could he possibly be the key in finding out what happened to Julia's sister?

Why you should read it? It's a tale of murder and obsession set in a digital age and will basically put you off going on Tinder for LIFE.