by Emmy Griffiths Published on 22 October 2015 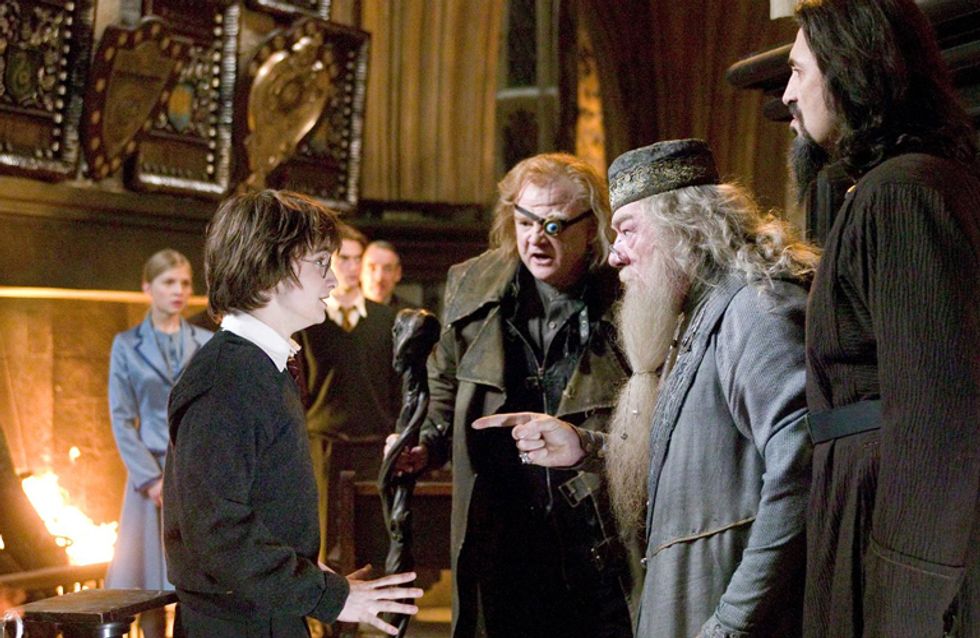 As much as we love the film adaptations of the Harry Potter series, there are some things in there that simply do not make ANY sense. They ignore JK Rowling's rules for the Harry Potter world and we cannot forgive, nor have we forgotten. Here's what is infuriating in the films to anyone who has read the books...

Burning down The Burrow

You had time for this but not the Order of the Phoenix fighting Death Eaters at the end of Half Blood Prince?! This makes NO. SENSE.

Bellatrix and Fenrir go to the Weasleys home, The Burrow, and torch the place down. This makes absolutely no sense as 1. there are meant to be enchantment protecting Harry, so they should have have been able to find it, 2. why didn't Voldemort go there himself if they knew Harry was staying there and 3. why did they even go? To set fire to a house that can be fixed with the wave of a wand? IT MAKES NO SENSE.

Let us direct you to part of Harry Potter and the Goblet of Fire when Harry’s name is chosen for the Triwizard Tournament, despite being too young to enter and Dumbledore asks him about it. The book reads: “’Did you put your name into the Goblet of Fire, Harry?’ he asked, calmly.”

CALMLY. IT SAID CALMLY. So when Dumbledore practically slams Harry into the wall and yells in his face in the movie version, this goes against EVERYTHING we know about the calm, patient and brilliant Professor. THANKS WARNER BROS.

Bonne Wright, who plays Ginny Weasley, is not a bad actress. Our quarrel isn’t with Bonnie. Our quarrel is with whatever screenwriter, producer and director decided it’d be a good idea to change her character from the cool, funny and likeable book Ginny to the seriously awkward plain Jane who cannot flirt to save her LIFE.

Twilight is a better love story than movie Harry and Ginny. Oh yeah, we went there.

According to Harry Potter Wiki, this kid is a Gryffindor called Bem who is LITERALLY just in the Prisoner of Azkaban and appears to tell the characters something horribly creepy before disappearing again. His two lines are: '"Not the Grin, you idiot. The Grim. Taking the form of a giant spectral dog, it's among the darkest omens in our world. It's an omen...of death.'" and (on the hunt for Sirius Black): "It's like trying to catch smoke... like trying to catch smoke with your bare hands."

After film 3, he is never seen again. Who was this ominous child?!

Why are they having a physical fight?! Pulling each other off buildings and such?! You are wizards! YOU HAVE WANDS! If you were planning on killing Harry by physical force, Voldemort, you could have just thrown him out of a window when he was one rather than have a spell backfire on you and cause all of your problems in the first place.
​
Seriously though, why have eight films of setting up how deadly wizard duels are only to have them wrestling with each other on the top of a building?

What’s the point of anyone having a wand then, if McGonagall can just do a stupid thing with her hands to open Dumbledore’s office and Dumbledore can slow Harry down when he falls off his broom etc? We get it’s visually dynamic, but it’s not backed up by even Harry Potter standard logic, IS IT?!

Towards the end of the film series, Ron stopped being a viable character in his own right and instead became an object for comic relief and/or a bit of a dickhead. In comparison to book Ron, this was seriously disappointing for the fans because there was no reason to change Ron’s personality like that. There was no visual reason. They just made Harry and Hermione their priority and stuck Ron in the background.

For example, when Hermione answers a question correctly in Prisoner of Azkaban book and Snape deducts points from Gryffindor for her being an “insufferable know it all”, Ron says: “You asked us a question and she knows the answer! Why ask if you don’t want to be told?”

The movie version says: “He’s got a point you know.” WOW.

We could go on all day. For shame, movies. For SHAME.

Anyone who has read Harry Potter and the Deathly Hallows and owns a brain/calculator knows that James and Lily Potter were both 21-years-old when Voldemort murdered them.

As such, by the beginning of The Philosopher’s Stone characters including Snape, Lupin and Sirius Black should all have been in their early thirties. As much as we love you, Gary Oldman and David Thewlis, this just wasn’t right casting. The flashbacks to Harry’s parents in their mid-thirties are also especially irksome.

The Ron and Hermione first kiss

In the movie, Ron and Hermione finally kissed after destroying a horcrux in the Chamber of Secrets. It was cute and everything, but in the books Ron finally proved himself worthy of Hermione’s affections when he thought about the house elves in the kitchen, and how someone ought to tell them to get out of here.

​As JK Rowling said: “Ron had finally got SPEW and earned himself a snog!”

This was just so bad. They should have gotten older actors rather than just had the usual cast look like they were in bad fancy dress. Or if they really needed to just prosthetics on the cast, why did they have to make Ron have thin hair and a beer belly, or make Ginny’s hair SO stupid? WHY DID HARRY’S GLASSES HAVE GOLDEN RIMS? Did that signify aging? Just no!

Was there anything from the movies you still can't let go?! Tweet us @sofeminineUK!