by Emmy Griffiths Published on 26 August 2015 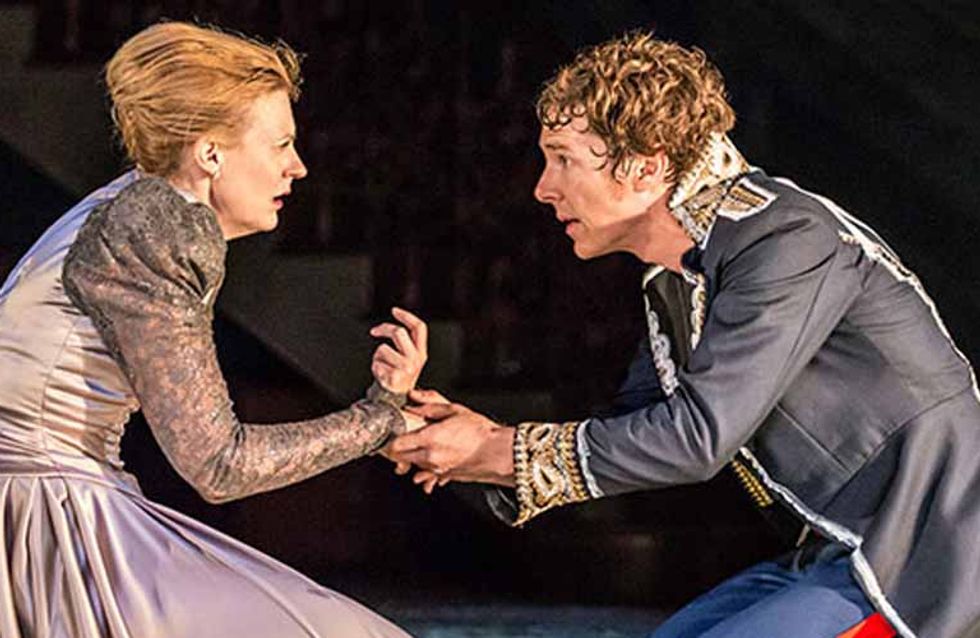 Benedict Cumberbatch has been doing an amazing job as Hamlet at the Barbican theatre, and we were lucky enough to go see the Sherlock star in action treading the boards as the Prince of Denmark. We may have struggled to see it properly through our tears of unbridled JOY, but we got the gist! Here's everything we learned watching Hamlet...

While fulling expecting at least one squealing fan when the lights came on at the beginning of the show. But when Benedict's Hamlet finally emerged leaning back and listening to some records (Nature Boy by Nat King Cole if you were wondering. 'Tis creepy), the inevitable Cumberbabes of the audience were quiet and respectful. That's not to say they weren't internally screaming (we know we were).

Is Hamlet really seeing his father's ghost, or is he simply losing his mind? Either way, the scene in which he feigns a ridiculous madness by dressing up as a tin soldier and hiding in a child sized castle on centre stage, occasionally popping up to pretend shoot someone, was a show highlight.

He also knows how to hit the humour

You'd think that the famous line: "Alas, poor Yorick! I knew him, Horatio", would be done with some sort of intense, dramatic fervour, but instead Benedict chats about the skull like he's just reunited with an old friend, excitedly telling Horatio all about how they met and drawing the big laughs.

Mance Rayder from Game of Thrones is in it!

Forget Benedict Cumberbatch (although don't forget him, he's perfect), because Game of Thrones' Ciaran Hinds plays Claudius (King of Denmark and Hamlet's Uncle/stepfather) and is as intense as you imagined he would be.

His show highlight took place during his soliloquy to mark the end of the first half and oh, THE ENTIRE STAGE BLOWS UP AROUND HIM. Think this:

BC has a fantastic memory

Hamlet has seven MAJOR soliloquies to deliver throughout the play. It's insane. We honestly don't know how he did it. Forget his acting, we were more impressed by the sheer size of his batchin' brain.

The set is mind blowing

It is huge, lavish and spares no expense looking like it truly belongs in a palace somewhere in Denmark. Then in the second half it is covered, we mean, COVERED in rubble. Mounds of rubble. Where did they even get that much rubble?!

It's hardly surprising since he's on stage for the majority of the show and has more lines that most people have ever spoken in their lifetimes and is always running away from/fighting/attacking someone, but Benedict Cumberbatch gets REALLY sweaty. There's a bit when he takes off his breaches and the outline of them are still on his light grey t-shirt. Oh Benedict! Dark grey! Always stick to dark grey.

He sword fights and it is AMAZING

The fencing scene between Laertes and Hamlet is amazing. We don't want to be melodramatic, but it's what dreams are made of.

His death scene is powerful stuff

Hamlet is a tragedy for a reason, we all knew it was coming, but still...

It's not all doublets and breeches

Being based the Royal family doesn't stop Hamlet wearing whatever the hell he likes. Seeing Benedict in jeans and a hoody for the majority of the play is a little weird (it just doesn't seem like him. Where's his Sherlock scarf and coat?!), but in comparison to his richly dressed mother and stepfather, the guards and the household servants, his appearance seems deliberately out of place.

Are you going to see Benedict Cumberbatch's Hamlet? Tweet us @sofeminineUK!

Check out the amazing images from the show... 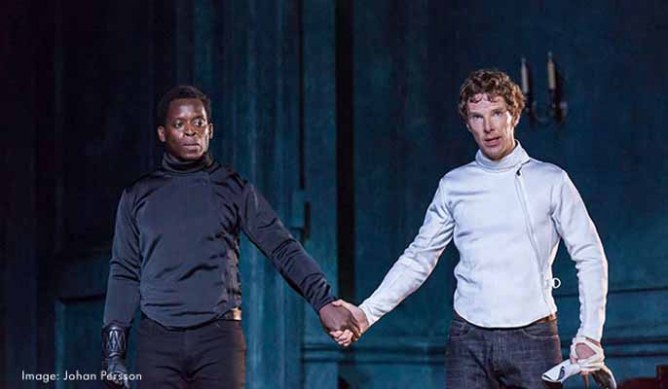 QUIZ: Which Benedict Cumberbatch Character Should You End Up With?