All Hail Ian, The Cheesecake King: 10 Things You Need To Know About GBBO Episode 4 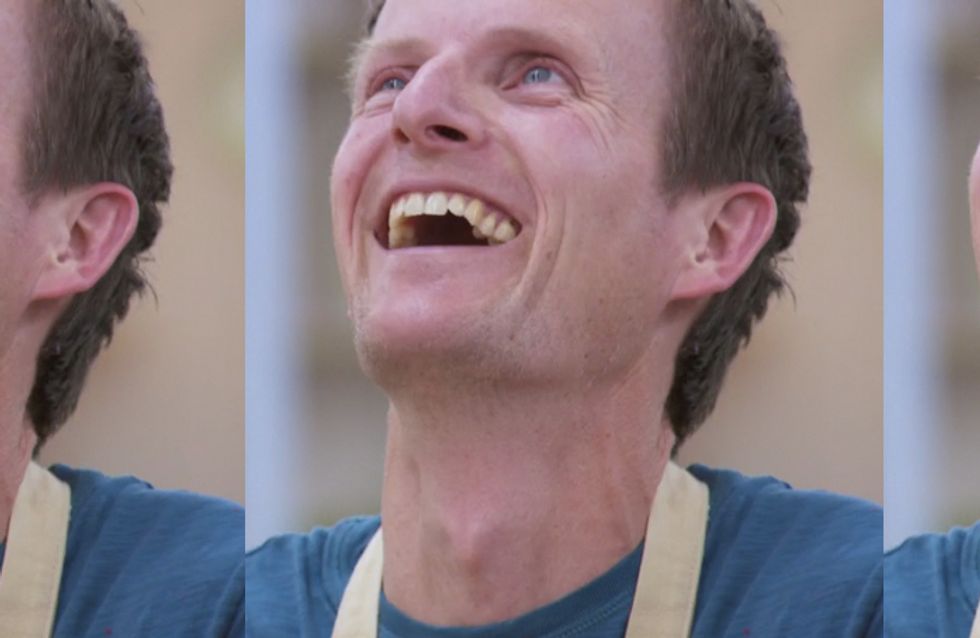 This week it was desserts week. Mad Sandy was knocked out for runny custard and sloppy cheesecake, Sue almost sabotaged Flora’s tuiles by using them as bracelets, and Tamal... Just Tamal. Sigh...Here’s what happened on this weeks Great British Bake Off.

1. Can we talk about Tamal again? Please?

Seriously, it’s beginning to distract us from what’s actually happening in the show. Who cares about runny crème brûlées when all you have is the image of Tamal mime-stuffing goat's cheese into his perfect mouth. Still.

The contestant’s crème brûlées were to get their crunchy topping with the help of a grill, instead of a blowtorch, which is obviously much easier. Presumably, besides upping the difficulty factor, the elimination of blowtorches was a safety precaution, because there’s so much bunting in that tent it would go up in flames quicker than you can say ‘good bake’. ’There was no such thing as a blowtorch when I was young,’ said Mary. There were a lot of things that weren’t invented when you were young Mary. Like the wheel (we're sorry Mary).

Come on. This is getting boring now. Ian was given the (invisible) star baker crown for the third time in a row, which really means that by default, we should hate him by now. But we don’t because even though the whole winning thing is getting a bit YAWN, Ian’s a sweetheart and by f*ck does he make a stellar cheesecake.

​However, cheesecakes aside, Ian’s bakes this week were just alright. I mean, his crème brûlées weren’t even that good - the bloody pomegranate was just TOO MUCH - but it didn’t matter that much, ‘cause Ian’s the favourite child now. He is the chosen one. He can pretty much do what he wants. Soon, he’ll be ordering Paul Hollywood to make 100 crème brûlées, forcing him to watch on as he plunges a muddy finger into the middle and tells Paul that ‘it’s a bit scrambly’.

4. Am I crazy to think there may be some sinister connection between the two Pauls?

I mentioned last week that I thought Welsh Paul might be Paul Hollywood’s protege, but now I think it runs deeper than that. They’re basically twins. They love the same things (bread, silver goatees, being intense). Usually with twins, there’s always one who’s evil, but I’m not sure in this case. I think they’re both kinda evil looking. They'd make a great evil duo. Welsh Paul’s the unpredictable one, whilst Paul Hollywood’s forté is intimidation.

​Maybe they’ll open up their own evil bakery, with Paul H as the waiter, saying stuff like ‘are you SURE you want to order that?’ and ‘do you REALLY want the hazelnut torte? You MIGHT have a hidden NUT allergy…”. Then, in the kitchen will be Welsh Paul, unnecessarily punching dough, the hellish fires from the stoves causing his face and his naked torso to turn redder than usual. ‘Whatcha makin’ there, Paul?’ you say nervously. He turns the masterpiece round to face you. 'Oh, it’s just the bread incarnation of LUCIFER HIMSELF,' he grizzles. It'll be great.

5. Mat was on top form with his fine bants

“How do they wobble?” He asks Ugne as she takes her desserts out of the oven. “The brûlées that is…” HEY-OH! Oi, oi, oi! Mat’s bringing the banter back to baking. He’s purely there for the lad factor. When all these bakes are getting just a little bit too girly, they wheel in Mat and order him to make some sort of crude baking innuendo. He's bringing in the male viewing figures with his boob/brûlée based comedy. It's a niche market, sure, but he's making it work.

6. The music makes the result of the bake feel like it's life or death

All these frantic strings and rising crescendos that accompany the montage of the bakers assembling their masterpieces makes the end result feel like a much more dire situation than They-Might-Not-Get-Their-Meringue-Lids-On-Their-Spanische-Wind-Torte-In-Time.

Ian’s crème brûlées were called ‘pomegranate two ways’. And they looked pretty good. Much better than anything I've ever baked. But, as Paul does, he criticised the amount of ways the pomegranate was used. He didn’t like it two ways, he wanted it just one way. But that’s Paul. No biggie. MOVING ON. But it was Mary - nice, sweet Mary - who surpassed us all when, in reply to the ‘pomegranates one way’ comment, she says ‘or pomegranates no ways!’. ALRIGHT MARY! Ian slaved long and hard over those crème brûlées! They took, like, two whole hours! We need less of this sass-mouthing.

8. No one could remember what a violet looked like

During the wind torte challenge, the bakers were asked to put sugar violets on their bakes. Which was probably the easiest part of the whole thing. Only, no one could quite remember what a violet looked like. Are they big, or small? Purple? Luckily they all came out vaguely similar, but it might have been a case of blind leading the blind. In the end, Alvin’s violets were the most criticised: “the violets are a little clumsy,” Mary said, poking the sad, delicate sugar creations. Oh it’s ok Mary, Alvin only spent 4 hours making them from your crap instructions. But it’s cool.

9. Nadiya and Mat’s cheesecakes awoke the inner child in all of us

Just listening to the two of them list out the ingredients in their nostalgic, sugar-filled cheesecakes was enough to make me giggle uncontrollably for ten minutes, run smack-bang into the patio doors and leave me screaming for my mum. Ah to be a child again.

Yeah, Mad Sandy’s time in the tent came to an end. It was quite sad really. She was happy to the end, and even managed to giggle when her third cheesecake tier slipped from its base, meaning she had to carry the layers separately to the judges. We will miss her wobbles, her weird faces and her northern, mum-esque wit.

What did you think of last night Bake Off? Let us know! @sofeminineUK
​

Fear And Loaving: 10 Things You Need To Know About GBBO Episode 3​