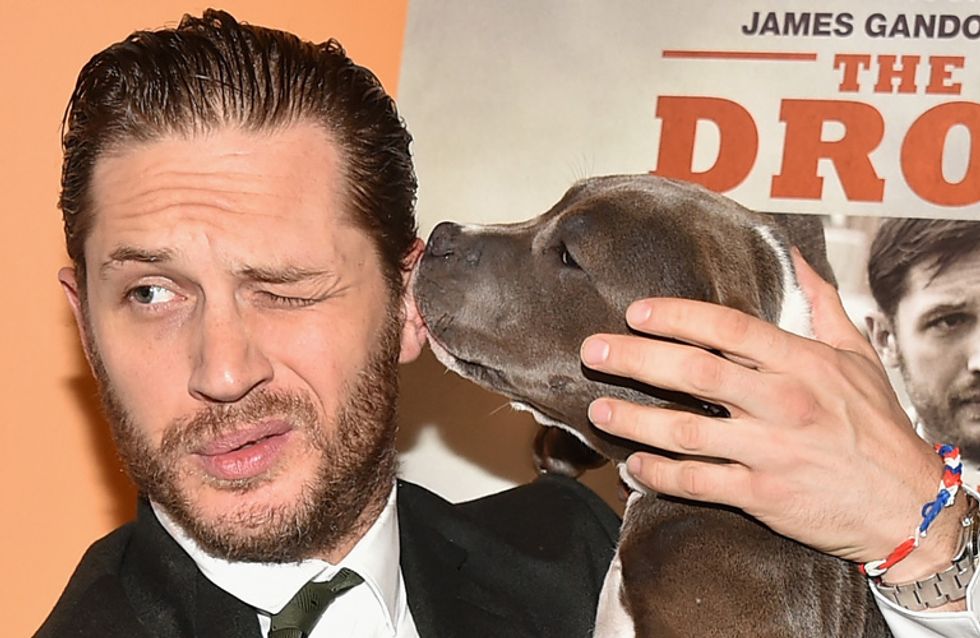 Tom Hardy has been hot on the press at the moment with the release of Legend where he plays twin gangsters Ronnie and Reggie Kray. Although it's obvious Tom is a major talent in Hollywood at the moment, we've also began to notice other tidbits from his life are equally as compelling as his acting chops! So in honour of his birthday, here are our favourite moments from our favourite actor...

When he took his dog to a film premiere

Who does this?! Who could even get away with this but Tommy H?! We do love a good old fashioned tale of a man and his dog, and it's clear that Tom loves his puppy more than any live human woman. Only joking, his wife attended the premiere with him. But where are the photos of her, HMMM? Do they even exist?!

#TomHardy and his dog awww! #Legend

Although really, they shouldn't have been surprised.

Dubsmash is an app where you mime along to popular quotes and songs, and Tom Hardy absolutely freaking LOVES it. Just WAIT for the Whitney Houston.

When he put a lampshade (vase?!) over his head

When he stood by his MySpace photos, not matter how embarrassing

We all had a good chuckle when Tom Hardy's seriously cringe MySpace photos came out of the woodwork, but Tom has recently revealed his love for the snaps. He said: “I’ve got no shame about my MySpace photos, especially the one of me in my underpants. In America, they say ‘You should be ashamed of this,’ but I’m actually not remotely ashamed — that is me in my natural habitat, thank you.”

When he was a dry wit in this interview

It was a poker-faced evening from Tom Hardy, and everyone wondered what had gotten his knickers in a twist. Now we all know him better, we think it's fair to say that he is the strong and silent (and wonderful) type, who can convey all with just a look...

Which one is hotter even?! Well...obviously it's Tom, yeah, but still.

When his movie poster for Legend got the world laughing

Basically, the Guardian gave the otherwise acclaimed movie a two star review, which some genius PR spun into a positive by doing THIS! This is so clever we're not even bad that it is totally misleading and manipulative!

When he starred as Charles Bronson and looked like THIS

Bald AND a handlebar moustache and he still manages to look sexy.

When it turned out and he and Benedict Cumberbatch are buds

Not only have they protested together, they've also appeared in a film called Stuart: A Life Backwards together. This is a new ship right here guys.

Let's not forget EVERY time he wears blue. In general.

Look at his EYES tho!

15 Iconic Redheaded Female Characters We Are Completely Obsessed With