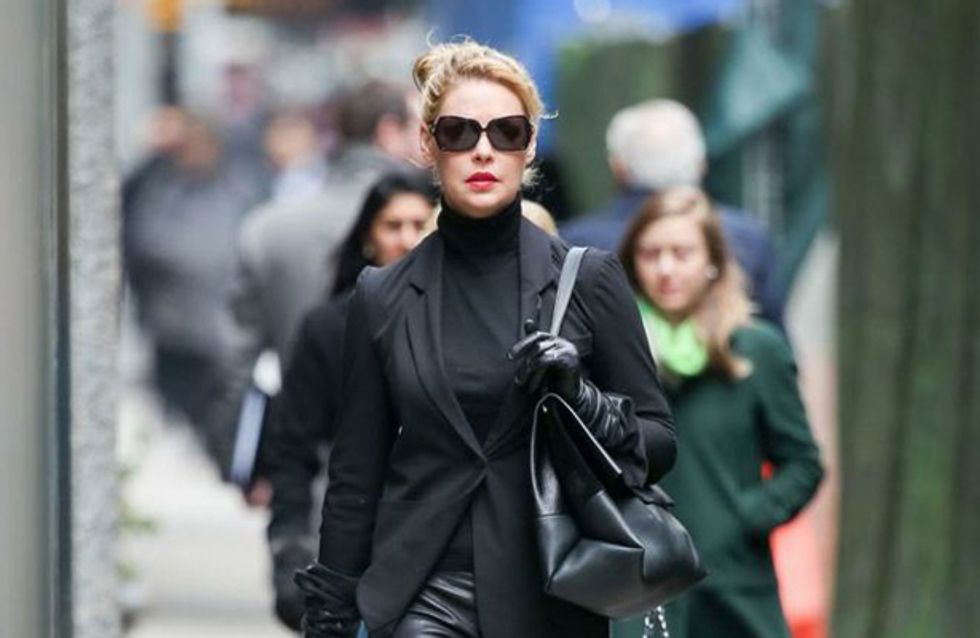 The former Grey's Anatomy actress is back in the spotlight but not for an upcoming movie! Heigl is suing Duane Reade for tweeting a photo of her outside the ubiquitous NYC drugstore. Huh? Maybe this out of work actress has too much time on her hands...She's not the first or last celeb to bring a ridiculous lawsuit to a judge's attention.

The 35-year-old Katherine Heigl is putting herself back in the public eye for a head-scratching lawsuit. After picking up some goods from Duane Reade, Heigl was photographed by a paparazzi, and the drugstore decided to tweet the photo.

Fast forward a few weeks - the lowly intern who probably handles Duane Reade's social media accounts found out that Heigl is suing the drugstore for SIX MILLION DOLLARS. The lingering question after finding out this news is...why?

Her lawyer told the media that Heigl "expect[s] Duane Reade to pay for its willful misuse of Katherine Heigl's name and likeness." Heigl's team swears any money she receives will go to her charity, Jason Debus Heigl Foundation, which is admirable until you remember that charitable donations are tax deductible expenses and she'll likely get money back for her "generosity."

Heigl joins a growing list of celebs who've brought some absurd, time-wasting lawsuits to the court. Let's see who she's rubbing shoulders with below!

During the 2010 American Superbowl, a funny E*Trade commercial featuring talking babies aired. One of the babies was named Lindsay...and that baby also happened to be a "milkaholic."

During that time, Lindsay was constantly in the news for DUIs, partying, and being an irresponsible actress, so she sued the financial services company for capitalizing on her bad behavior. The case was dismissed but Lilo's mom claimed that they were happy with the end result, implying that LiLo got some $$ out of it. Who knows if Dina was telling the truth though! The woman doesn't have a great track record with honesty.

The judge in Mariah's case agreed that Mary Carey's chosen profession and name had potential to shed a negative light on Mariah Carey's career. Mary Carey had to change her name.

Kim K isn't the only woman in the world with dark hair, dark eyes, and a show-stopping backside, but when she saw her supposed doppelganger on a commercial for Old Navy she immediately called her lawyers. She sued the low-cost retailer for $15 million in damages for deceiving the public into thinking she endorsed the brand.

She eventually settled out of court but with so many Kim K lookalikes out there we wonder if she'll try to trademark dark hair and contouring!

The rapper sued Taco Bell in 2008 for using his name to promote their new low-cost menu. In a press release, the fast-food chain suggested that 50 cent change his name to 79 cent or 89 cent. Fifty didn't think it was funny and he sued Taco Bell. The matter was settled out of court.

Obviously, Ron Livingston is not gay but instead of laughing it off, he went after the anonymous poster in court, suing for defamation. The whole pursuit smelled a bit like homophobia and there hasn't been an update on the case.

The public thought the lawsuit would be laughed out of court but to everyone's surprise, the judges ruled in favor of Vanna!

Courtney Love owed credit card company, American Express, over $300,000 and so they sued her for her unpaid bills. Instead of taking responsibility for it, Courtney Love sued AmEx for not taking note of the fact she had over 100 credit cards in her name that obviously didn't belong to her.

AmEx fired back with solid proof that she only had three cards in her name and they all amounted to the outstanding balance they were suing her for. Oop, Courtney! They settled out of court, of course.

In 2004, American Pie actress and former Hollywood darling, Tara Reid, showed up at P. Diddy's 35th birthday bash a thousand sheets to the wind. In her compromised state, she didn't notice when her dress slid down, exposing her boobs to the photographers. A few months later, Las Vegas' Sky Condominiums published an advertisement that said: Dear Tara Reid. Come let it all hang out.

It definitely wasn't a very nice ad, and she sued for potential damage to her reputation. But, honey, showing up so drunk to an event that you can't keep your clothes on might've had something to do with your floundering rep.

We love Winslet but she needs some thicker skin! In 2009, she sued the Daily Mail for deeming her the "World's Most Irritating Actress." Although we absolutely disagree with that title, dealing with not-so-nice opinions from random people is par for the course of being a celebrity.

The Oscar winner also said the mag caused potential damage to her reputation because they lied about her exercise regimen. At the time, Winslet had noticeably lost weight and was receiving criticism for suddenly adhering to the Hollywood standards of beauty (thin, blonde). She's always advocated a healthy body image so she was worried that the Daily Mail swayed her fans into believing she was a fitness freak who promoted skinniness.

We know that you're all about positive and confident body image, Winslet! Plus, you're BFF's with Leo Dicaprio and Tinseltown bows at your feet the second you step into a room. Even though she did get compensation, it's surprising that she let one silly article block her shine like that.

Comedian and TV host, Bill Maher, went on the long-running US programme, The Tonight Show last year and said Donald Trump was "the spawn of an orangutan." The crowd cackled in agreement, but meanwhile in TrumpLand, located somewhere out in the cosmos, Donald was furious and sued Bill Maher for $5 mil in defamation.

Trump dropped the lawsuit because the validity of it was very...thin, but we hear the orangutans at the Bronx Zoo are crafting their own lawsuit against Bill Maher for the unwanted comparison.

What lawsuits would you have thrown out of court? Tweet us @sofeminineUK!