by Emmy Griffiths Published on 14 August 2015

Young adult fiction is so freaking hot right now, and for good reason. Not only is the genre churning out one blockbuster after another and harnessing passionate fan bases, it can also be really really good. So if your opinion on teen fiction is based on reading Twilight, here are the YA novels that are ACTUALLY brilliant… 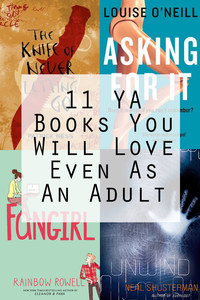 Set in a parallel/future London, clairvoyants are well known and feared by the general public, forcing them to work in London’s underworld. A girl called Paige belongs to a particularly well-known gang of clairvoyants before being kidnapped and forced into slavery by Rephaites, unknown creatures who has remained hidden for hundreds of years.

Why you should read it: If you love fantasy fiction, this one’s for you. It’s fantastically written, fast-paced and totally original. It's sequel, The Mime Order, is even better.

In the future, humanity has settled on another planet after exhausting Earth’s resources. However, after a germ kills all the women the men begin to hear each other’s thoughts in a non-stop barrage of ‘Noise’. Todd, the only person to have grown up never knowing silence, finds a girl who crash lands onto the planet and realises he can’t hear her thoughts and together the pair begin to search for a cure for Noise.

Why you should read it: The premise sounds weird. But take it with a pinch of salt, and you’ll be blown away. You’ll care deeply about the characters and best yet, it’s a trilogy. YAAS.

We Were Liars - E. Lockhart

Cadence has never been the same since a head injury left her with amnesia and suffering from terrible headaches. Determined to return to her family-owned island in an effort to remember what happened to her, Candence returns and reunites with the Liars, a group made up of her cousins and their friend who have sent every summer together since they were young, but nothing is quite as it seems.

Why you should read it: It’s a mystery that just keeps growing stranger. You know you’re missing something, and when you find out what that thing is you have the sheer joy of EVERY piece of the puzzle slotting together. It’s brilliant.

Asking For It - Louise O'Neill

A popular albeit somewhat bitchy and self-obsessed teen goes to a party, gets drunk and takes drugs. In the morning she wakes up with none of her friends speaking to her, everyone looking at her at school and over 600 Facebook notifications. It turns out that during the night that she can’t remember, boys she thought were her friends had done terrible things to her before posting them on Facebook, making her the subject of ridicule. So begins Emma’s mental destruction as she sinks into a deep depression.

Why you should read it: It is a harrowing look into every terrible thing a rape victim goes through, particularly in the age of social media. It shows the shocking effect of victim blaming, as well as the profound effect it can have on the victim’s family. Seriously, everyone should read this.

After a civil war begins over the issue of abortion, the government decides that teenagers may be ‘unwound’ if parents still don’t want them, meaning that their parts would be donated to other, using 100% of the body and as such claiming that ‘unwinds’ don’t really die. Three teens chosen for unwinding manage to escape and do whatever it takes to survive against the odds.

Why you should read it: It’s a dystopian future that doesn’t include any of the following: zombies, viruses, safe havens, computers, or vampires. What more could you ask for?!

Jacob visits Wales after his grandfather dies horribly, leaving Jacob suffering from PTSD. Since his grandfather would always tell him strange stories about his time at an orphanage, Jacob is determined to find out the truth about his past, which leads to so much more than he could ever imagine.

Why you should read it: Not only is this book really creepy, it also uses bizarre, old photographs, which the author used to create the story. It’s a whole new type of storytelling, and it WORKS.

Lyra spends her days harassing the academics at her home in Jordan College, Oxford, and playing with other kids and her daemon, Pantalaimon (the animal embodiment of the soul which every human has). However, after Lyra’s best friend Roger goes missing, it starts Lyra on an epic adventure to discover the truth about mysterious Dust and to find her friend.

Why you should read it: It’s amazingly good, with the movie adaptation being nowhere near the books. It’s themes of religion, innocence and destiny are incredibly told, and Lyra is up there on the list of great literary characters.

The Art of Being Normal - Lisa Williamson

David has always wanted to be a girl, and is too afraid to tell his parents that he wants a sex change. In walks Leo, the new mysterious boy at school who sticks up for David and learns his secret, sparking an unlikely friendship between the two.

Why you should read it: It gives you an insight into what transgendered teenagers go through with self-identity, acceptance and bullying, but it has a hopeful and important message as well. NOT to be missed.

Cath and her sister Wren have always been close, and used to obsessively write fan fiction together about Simon Snow (basically Harry Potter, just FYI). However, when they go to Uni Wren grows more confident and makes new friends, while Cath becomes more inverted and obsessed with her work.

Why you should read it: Rainbow Rowell's novels are full of actual real people with real interests, and this one is no different. It might not be glamorous or mysterious or enviable, but Cath actually feels like a person you could know and like, and as such the book is a winner.

The Perks of Being A Wallflower - Stephen Chbosky

Charlie considers himself to be a wallflower, unnoticed by everyone. With a terrible past, he decides to keep his head down in High School, counting down the days till he can graduate. Then he meets Sam and Patrick, two seniors who befriend him and bring him into their friendship group and changing his life.

Why you should read it: If you have ever read Catcher in the Rye, this is definitely one for you. Charlie's unique view of the world is truly worth the read.

In WWII Germany, Liesel lives with her adopted family and Max, the Jew they have hiding in their basement. Trying to find happiness in the Nazi-controlled country, Liesel learns to read, stealing books and sharing them with Max as Death watches over them, narrating the novel as he takes a particular interest in Liesel.

Why you should read it: The format of the novel is fascinating, with the omnipresent Death speaking directly to the reader, jumping ahead in time and summarising the events at the beginning of each chapter. The characters and their relationships in a war-riddled country is also beautifully told.

Do any of these take your fancy? Tweet us @sofeminineUK!