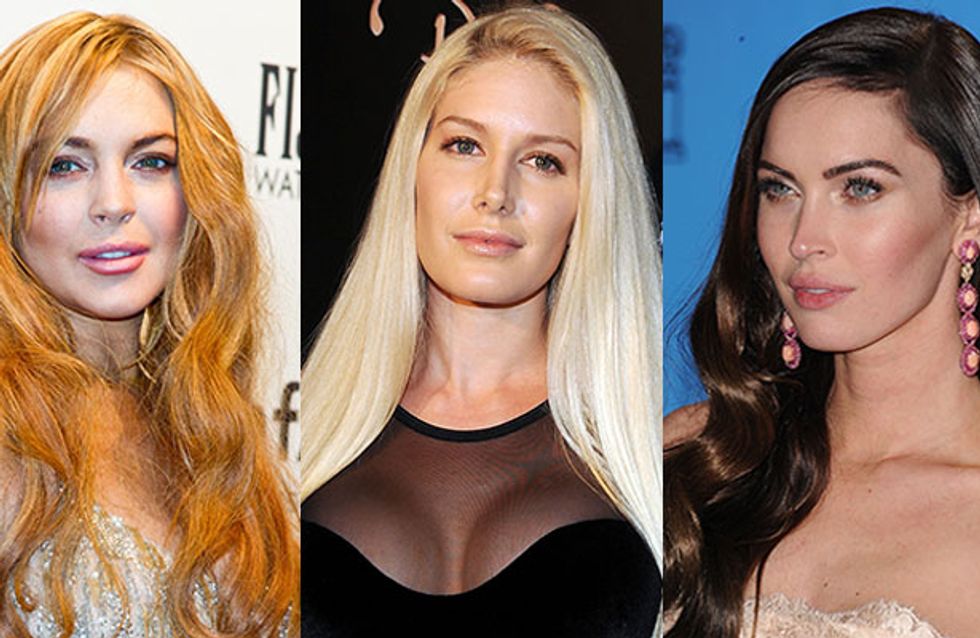 Plastic surgery seems to be an essential everywhere not just in La La Land, as we know countless rich and famous people who have gone under the knife. A tummy tuck here, lip plumping there, it seems on par to putting make-up on in the morning. However, unfortunately for some, surgeries don't go quite as planned. Here are 12 celebs that make cosmetic surgery look like a BAD idea. Eek!

Lindsay's lip enhancement makes her look unnatural and, to be honest, a bit of a hot mess. We miss the Mean Girls Lindsay who was naturally beautiful and didn't scare us!

Katie Price paid the price when she transformed herself into Jordan...

Heidi underwent TEN surgeries in one day, utterly transforming her appearance from the fresh-faced girl next door to...well...a barbie. Even her mum hated it.

An expert at In Touch magazine thought Megan could have had "botox, eyelid surgery, a nose job, cheek fillers, laser skin resurfacing and lip injections" to alter her appearance.

So yes, while boys tend to think that Megan Fox is the hottest thing to ever walk the planet, we disagree. At least before she looked interesting. Now she just looks generic. Sorry, not sorry.

Janice Dickinson is quite the plastic surgery advocate, having had a nose job, a facelift, lip injections, botox - the list goes on! In this case, plastic is not fantastic.

Jocelyn Wilderstein is a New York socialite who caused general dismay when she revealed her plastic surgery. She had extreme cosmetic surgery as she wanted to make herself look like a cat to please her husband.

​Perhaps unsurprisingly, the pair divorced in 1999.

Apparently the reality show star has had a rhinoplasty, lip enhancement and possibly a boob job. Once again we're in a barbie world!

Tara Reid has scars on her stomach from a botched liposuction. We can't help but feel bad for her, she never needed lipo to begin with!

Pamela Anderson was naturally gorgeous but still felt she had to transform herself into THIS... *shakes head*.

Poor Jennifer Grey's nose job looks great, but apparently it also ruined her career. She said: “I went into the ­operating room a ­celebrity and came out anonymous,”

“It was the nose job from hell. I’ll always be this once-famous actress nobody ­recognises because of a nose job.”

Do we even need to elaborate on this one? However, Joan loves how she looks, so good for her!

She said: "Babies respond to pretty faces. So stop telling everyone it’s okay not to be pretty! If you can fix it, fix it! If it makes you happier. I love to look in the mirror and say, 'For 77, you look good.' That’s all. I don’t care what anyone says. Not bad for 77."

On the other hand, for some it worked out just fine! We're looking at you Blake Lively!

Would you ever consider plastic surgery? Tweet us @sofeminineUK!