Home / Entertainment / News celebrities / Was 'Listen' The Scariest Doctor Who Episode Yet? 12 Of Doctor Who's Most Terrifying Moments

Was 'Listen' The Scariest Doctor Who Episode Yet? 12 Of Doctor Who's Most Terrifying Moments 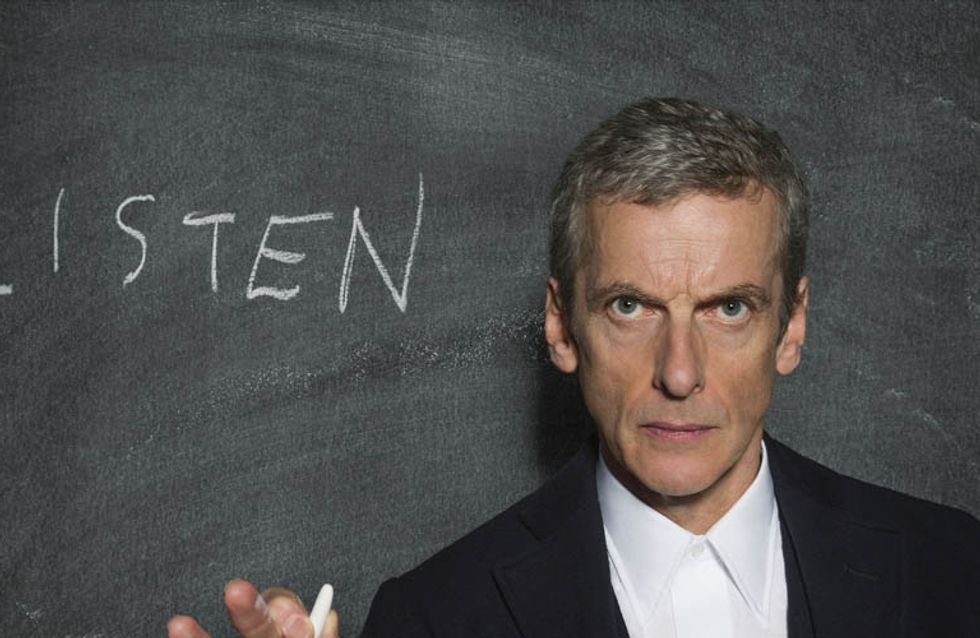 We’ve all heard our parents go on about how they used to hide behind the sofa when the Daleks came on screen and rolled our eyes because, let’s face it, Daleks are so ‘meh’ nowadays. It takes more to scare our generation than those oversized pepper shakers, and the Doctor Who reboot KNOWS it. After last week’s truly horrifying episode, here are the scariest moments so far…

Last week’s episode, filled with ankle-grabbing monsters under the bed and the idea that we are all constantly accompanied by an unknown entity probably outdid Blink in the fear factor.

From the figure hiding under the blanket to the airlock opening by itself, we could hardly watch.

The now famous line: “Don’t Blink. Blink and you’re dead. Don’t turn your back, don’t look away and don’t blink” sets the tone of one of DW’s all-time greatest episodes. The idea that angel statues can come to life and kill you when you so much as blink was too freaky to watch with the lights off.

Now we think about it, we’re not sure how much we blinked during the episode.

Doctor Who thrives when the monsters are invisible. Forget ugly aliens and Daleks, the nameless creatures are a LOT worse.

In Midnight a group of passengers trapped in a shuttle are attacked by something that is only described in a super creepy poem (“We must not look at goblin men. We must not buy their fruits: Who knows upon what soil they fed. Their hungry thirsty roots?”). Ugh, so scary.

"OH MY GOD IT’S IN THE ROOM WITH THEM” –Every Doctor Who viewer ever.

How did the writers think of putting a creepy child in a gas mask and have it ask people if they are his mummy. IS THERE ANYTHING MORE HORRIFYING? THE ANSWER IS NO.

Rose absorbed the energy of the time vortex to save the Doctor and described herself as the season-long mystery of the Bad Wolf before obliterating the Doctor’s enemies.We love Rose, but this was seriously creepy.

Anyone remember when the Doctor realised every single statue surrounding them was an Angel? Or when Amy had to walk through the forest alone with her eyes closed? Or when the taped angel in the television managed to escape from the screen like the little girl from The Ring? SO MUCH FEAR.

Silence in the Library

Once again, the scariest thing to fear in this episode was nothing but the shadows. But since the shadows could move and literally eat you alive at any point, it made this line: “stay out of the shadows. Not a foot, not a finger in the shadows till you're safely back in your ship”, especially spooky.

The Girl in the Fireplace

Why is almost so much worse when the monster is under the bed?! The Girl In The Fireplace was a fun episode in a lot of ways, but when the Doctor checks under the bed as the clock is broken and can still hear ticking and finds a terrifying clownish clockwork man hiding there, we MAY have switched over for a few seconds.

He will knock four times

The prophecy of the Doctor’s death was eerie and we didn’t care for it! On the other hand, it was the best moment of the Planet of the Dead episode.

There was nothing more terrifying than these slender man inspired monsters, especially as you forget they exist the moment you look away. To remind themselves they had seen one, the characters marked themselves.

So when a character is walking through a room with marks slowly appearing everywhere and you know the monsters are close by, that’s when it’s time to start screaming and/or wondering why you started watching this stuff of nightmares in the first place.

They wanted to live forever. So the Doctor made sure that they did.

Conclusion of this story: never p*ss off the Doctor. Let's not even talk about the little girl with the balloon always standing behind you in the mirror…UGH.

Clowns. Clowns with angry faces. Clowns who are unhappy with you. So many nightmares.

Which wins as the scariest moment in your opinion? Tweet us @sofeminineUK!