by Emmy Griffiths Published on 9 October 2015

It's the scariest time of the year, and to celebrate the oncoming witching hour we are bringing you our favourite freaky books. From disturbing, ominous future to haunted houses to haunted masks, here are our favourite stories that you won't be able to read just before bedtime... 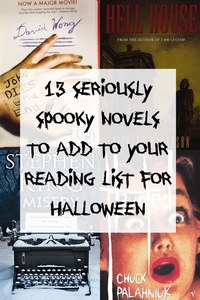 After becoming the prime suspect in his long-time girlfriend's murder, Ig Perrish wakes up with horns growing out of his head, with everyone around him inexplicably telling him their darkest secrets and desires and uses it to discover the truth about what really happened to his girlfriend.

This dark fantasy novel is seriously gruesome and creepy, especially as Ig grows more and more devil-like and you begin to wonder what kind of protagonist you are following...

More Than This – Patrick Ness

This teen novel follows Seth, who wakes up after seemingly drowning to death in an abandoned, partially ruined town. So where is he now? Did he die? And what is that thing that seems to be searching for him and killing every live thing it finds?

​As John Green said in his review of the novel: "Books are often described as ‘mind-blowing,’ but this is one of the few books in which, while reading it, I have exclaimed aloud, ‘Oh. My. God.’ on multiple occasions. I won’t tell you anything else about it. Just read it."

King is famous for his ghost stories, but there is something much more frightening about Misery's antagonist. When a bestselling author of a famous book series crashes his car, he is rescued by a seemingly homely, kind woman named Annie Wilkes who claims to be his number one fan.

When Annie reads Paul's latest novel and hates the ending, she keeps Paul prisoner and forces him to write a new novel with the ending that she wants, doing whatever it takes to keep him there.

These stories may be aimed at teens but be warned: Horowitz doesn’t shy away from the stomach-dropping twists and gore. Some stories are scarier than others, and we’re not ashamed to say that a few even kept us up at night.

The highlights include ‘The Sound of Murder’, in which a deaf schoolgirl can pick up her teacher’s murderous thoughts on her hearing aid, and ‘Burnt’, and ‘The man with the yellow face’, in which a boy has photos taken in a booth only to receive terrible photos of a man with a disfigured face instead of his own.

There may not be any ghosts or ghoulies, but this dystopian novel speculates what would happen if women’s rights were removed in the future who is kept to provide children for a high-ranking official. It’s a terrifying premise and promises to disturb.

The Turn of the Screw – Henry James

Serving inspiration for the Nicole Kidman movie The Others, you can imagine what's in store for your nightmares if you read this before bedtime. A Governess takes care of two creepy children in a creepy house as she begins to see the ghosts of two previous employers, and begins to suspect they are communicating with the children. It's only short and you could read it in one sitting if you wanted to, but make sure you read it with the lights on...

Sure Goosebumps is for kids. Sure they are meant to be silly scary stories. But we defy you not to feel chills at their not-always-happy endings and dark twists. Like when The Haunted Mask takes over Carly Beth's personality. Or when kids go missing in The Horror at Camp Jellyjam. And if they don't freak you out, the intro to the TV show adaptation of the book series certainly will. THAT DOG.

Dorian Grey sells his soul to remain young as a portrait of him ages and becomes deformed with every sin he commits. Just the description of the painting is enough to freak us out!

If the story about strange Victorian children who don't seem to age or die, monsters who hunt you down and time forever on a loop doesn't freak you out, the photos in the novel certainly will. The photographs are real vintage photographs, and they are freaking spooky.

How could we just put ONE Stephen King novel into the list? The Shining is King's most famous and possibly most terrifying novel about a family who move into an isolated and empty hotel. Soon enough the son, Danny, begins to see things and have premonitions, whilst the father Jack slowly grows insane from cabin fever, becomes possessed and attempts to murder his family.

Twenty-three horrible short stories about a group of people who agree to go on an artist retreat for three months which ends up being a locked up old theatre totally isolated from the outside world. Running out of food, power and heat, see what happens to each of them as they go to any lengths to come out of the experience on top. Apparently so far as public readings, the Chuck Palahniuk (who also wrote Fight Club, just FYI) short stories have caused over 70 people to faint. LITERALLY FAINT. The power of words people! Especially watch out for the short story 'Guts'. You will vom.

"My name is David Wong. My best friend is John. Those names are fake. You might want to change yours. You may not want to know about the things you ll read on these pages, about the sauce, about Korrock, about the invasion, and the future. But it is too late. You touched the book. You are in the game. You are under the eye. The only defence is knowledge. You need to read this book, to the end. Even the part about the bratwurst. Why? You will just have to trust me. Unfortunately for us, if you make the right choice, we will have a much harder time explaining how to fight off the otherwordly invasion currently threatening to enslave humanity. I m sorry to have involved you in this, I really am. But as you read about these terrible events and the very dark epoch the world is about to enter as a result, it is crucial you keep one thing in mind: NONE OF THIS IS MY FAULT."

Thought to be one of the scariest novels of all time, the story is a typical horror house about four people who investigate the possibility of an afterlife by exploring one of the most haunted houses in the world, the Belasco House. As you can imagine, things do not go well.

What are you going to be reading this Halloween?! Tweet us @sofeminineUK