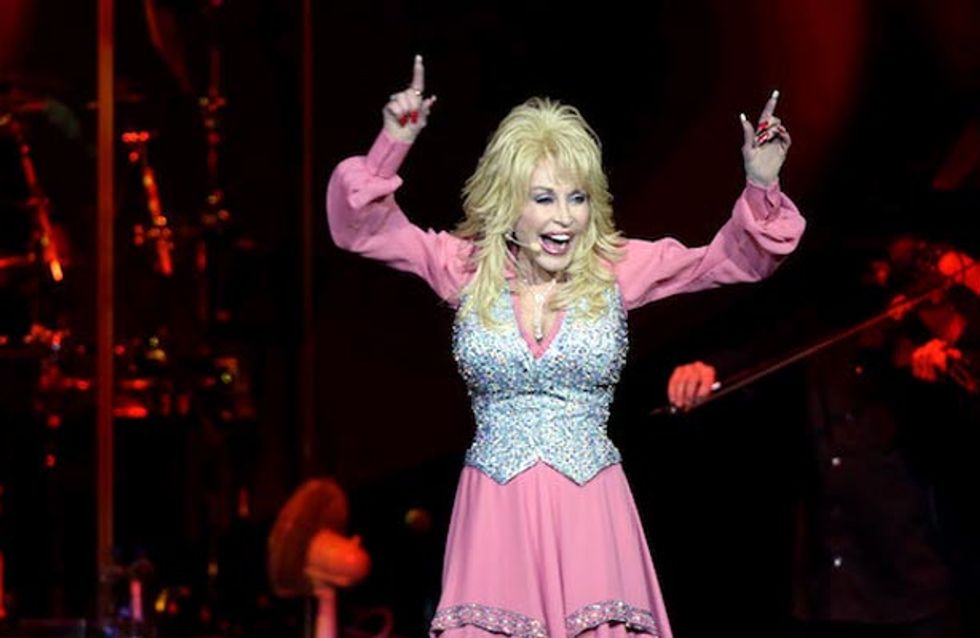 Dolly Parton might be 68-years-old, but she just rocked it at this year's Glastonbury festival! Whether she was miming or not, we bloody love her! This is the woman who once said "if you want the rainbow, you gotta put up with the rain." Turns out there's a lot more to Dolly than meets the eye, so here are 15 facts you never knew about the pint-sized songstress...

She refers to her boobs as ‘show dogs’

Do they have individual names though, like Rover or Fluffy? That is the burning question.

She has to protect her assets after all!

She loves a bit of plastic surgery

She said: “If I see something sagging, bagging and dragging, I’m going to nip it, tuck it, and suck it!”

She’s even had a part in Hannah Montana, and it's amazing.

These include I Will Always Love You, Jolene and of course, 9 to 5!

She entered a Dolly Parton look-a-like contest and LOST

She dressed over-the-top and entered for some fun then lost to a MAN. A MAN.

Dolly has ELEVEN brothers and sisters

She is the most honoured female country performer OF ALL TIME

She’s won 25 RIAA certified gold, platinum and mulit-platinum awards, had 25 songs reach number 1 on the Billboard Country charts, and has had 41 top 10 country albums. Oh, don’t forget the 8 Grammy Awards, 2 Academy Award nominations and her induction into the Country Music Hall of Fame.

She grew up in a one-room cabin

With a crazy amount of brothers and sisters if you weren’t paying attention. WTF.

Dolly and her hubby Carl have been together nearly 50 years

They met in a Laundromat in 1964, and the rest is history!

She wrote her first song age 7

She also started appearing on radio from the age of 9, and her first record was when she was just 13.

The first cloned sheep was named after her

Scientist Ian Wilmut said: “Dolly is derived from a mammary gland cell, and we couldn’t think of a more impressive pair of glands than Dolly Parton’s.” Hmm, right then.

She turned away Elvis Presley

The King wanted to sing I Will Always Love You, but he also wanted half of the publishing rights (greedy). Dolly refused, keeping her royalties to herself like the classy businesswoman she is.

She’s a supporter of gay marriage

According to Dolly: “I always say, ‘sure – why can’t they get married? They should suffer like the rest of us do!’” Nice way of looking at it Dolly!

She has a theme park called Dollywood in Tennessee

Despite being scared of rollercoasters. Oh Dolly.

It's official. We love you Dolly. Did you manage to see Dolly live at the Festival this year? Tweet us @sofeminineUK