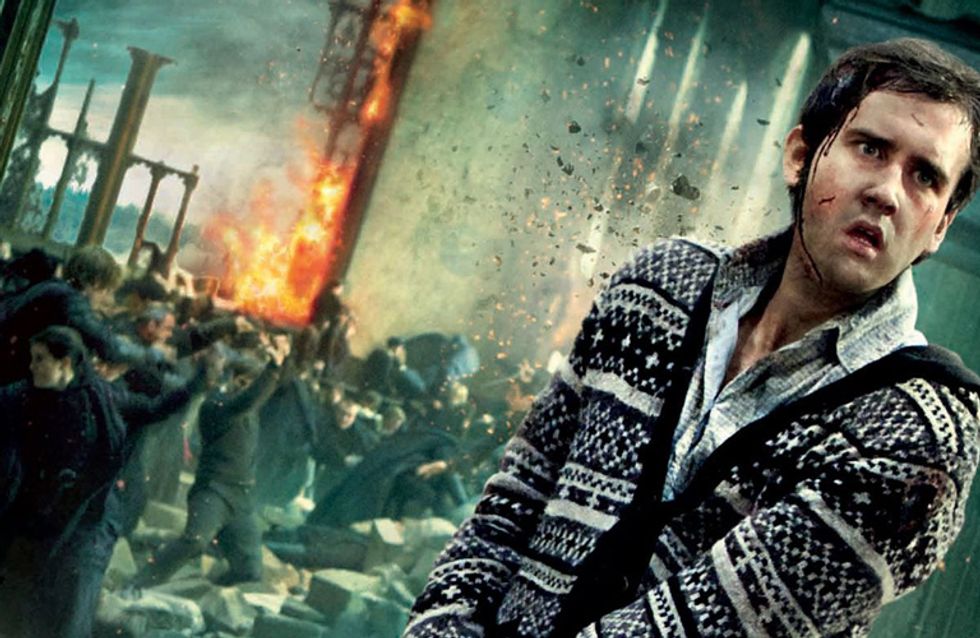 All Harry Potter book readers will know that the movies are pretty different to the original source material. There's so much going on in the seven-book series that eight movies couldn't possibly have squished every morsel into the movies. However! There are some things we reckon they definitely could have made time for...

We didn’t want that PG-rated adorable commentary from the kid from Tracy Beaker. We wanted the BOOK commentary, where Lee Jordan is both blatantly biased and comedy gold, especially when McGonagall chimes in.

Lee: "THIRTY-ZERO! TAKE THAT, YOU DIRTY, CHEATING —"
McGonagall: "Jordan, if you can't commentate in an unbiased way — !"
Lee: "I'm telling it like it is, Professor!"

In Chamber of Secrets the trio go to the Gryffindor house ghost Nearly Headless Nick’s Deathday Party, which is really gross and would surely have made for great viewing.

We kind of get why they left this out, because the only way it helped with the plot was to put the trio in the wrong place at the wrong time when, leaving the party, they are the first to find Mrs Norris petrified. But still.

We’re not angry, just disappointed. The Society for the Promotion of Elvish Welfare was the best most pointless Society ever.

Winky was an integral part of a major plot in Goblet of Fire as she was in charge of Barty Crouch Jr before he managed to escape to do Voldemort’s work. After being fired for this failure, Winky turns to drink in the Hogwarts kitchens, with Dobby trying to help her. But then, they totally butchered the whole Barty Crouch story, so Winky’s lack of involvement was hardly surprising!

Throughout the GoF novel an integral point is that Rita Skeeter humiliates Harry, Hermione and Hagrid by publishing extremely personal stories about them which she couldn’t reasonably know, sending Hermione into a frenzy to find out what it is. When it turns out Rita is an unregistered animagus who turns herself into a beetle to spy on people, Hermione catches her in a jar and blackmails her. It’s one of Herm-own-ninny’s greatest moments and THEY CUT IT OUT.

Also know as the only riddle we know off by heart. “First think of a creature who lives in disguise…” This part was really creepy and cool, and also showed that Harry wasn’t as much of a dumb dumb as the movies make him out sometimes.

It was a good insider into how Voldemort returning could effect a mother as Harry walks in on Molly trying to banish a Boggart that is turning into every member of her family, dead on the ground. It also gives us proof that she sees Harry as a son, which is freaking adorable.

When Harry and the gang visit Arthur Weasley in St Mungos, they run into Neville who was visiting his parents – who were tortured into insanity by Bellatrix Lestrange. It was a desperately sad but also necessary scene to see that Neville grew up in possibly even more dire conditions than Harry, which brings us to:

Neville: the other boy who lived

We know it’s not necessarily that important, but finding out that the prophecy for a chosen one who could defeat Voldemort could have been about Neville was a potentially awesome twist (before Dumbledore clarifies it’s 100% about Harry so he needs to suck it up and do murder already).

At the end of Order of the Phoenix, after Sirius dies, Harry goes proverbially BATSHIT in Dumbledore's office, smashing everything up and screaming his tiny little lungs out and the series needed it! Harry's had some dark times and he flips out! It's only natural! The movies paint him as being way too noble.

Voldy’s backstory was pretty much the majority of The Half Blood Prince and told us everything we needed to know about Harry’s mortal enemy, but the movie missed out HUGE chunks.

Voldemort’s mother, Merope Gaunt (a descendant of Salazar Slytherin) fed his muggle father Tom Riddle a love potion so he would stay with her, and died in childbirth after being disowned by her muggle-hating family and Riddle after she stopped using magic on him, convinced he would love her without tricks.

The book readers spent the best part of a year wondering what Dumbledore meant when Harry forced him to drink that potion as he shouted: “It’s all my fault, all my fault…I know I did wrong, oh please make it stop and I’ll never, never again…”

It turned out that Dumbledore fought a duel with his once-friend Grindelwald and his brother Aberforth, and his younger, damaged sister Ariana wandered in and was killed and Dumbledore never forgave himself. In the books Aberforth, who appears in the film, explains all of this. So why not just explain in the movie? It would have taken like one second!

A believable romance between Harry and Ginny (hawdy ha ha)

Seriously though. In the books, Harry kisses her in a moment of euphoria after they win the Quidditch Cup, then they have a seriously cute and REALISTIC relationship where they hang out, talk about Quidditch etc. There's none of this 'let me feed you a mince pie and sneak kiss you in the Room of Requirement' nonsense. UGH movie Harry and Ginny's relationship is the WORST.

Dudley undergoes a change of personality after Harry saves him from Dementors, and shakes his hand before leaving him for good. Harry remembers a cup of tea he cut himself on earlier in the week and realises that Dudley left it there for him, which is just adorable.

Weasley is our King

A humiliating yet creative way to embarrass Ron, get Harry and Fred kicked off the Gryffindor Quidditch team after they attacked Malfoy in a rage, AND be the BEST redemption story when the Gryffindors sing it when they win the Quidditch Cup thanks to Ron. It would have been so glorious.

It was also fascinating in the books when you found out there was more to Aunt Petunia than she let on (remember when she knows about Azkaban?), but we finally find out in Deathly Hallows that after Lily had been accepted into Hogwarts, she wrote a letter to Dumbledore asking if she could go too.

It showed her in a sad new perspective: she wasn’t just a perfectionist, slightly nutty housewife. She was a woman who had spent her life bitterly disappointed and overshadowed.

Realising that JK Rowling already told you where the diadem was in book number 6 is one of the most chilling and awesome foreshadowing revelations in the whole series. You didn't think twice about that tiara shoved on top of the dusty wig, did you? Neither did we! The same sort of thing happened with the locket at Grimmauld Place that none of them could open, but we all sort of saw that one coming.

In the movies, finding the long lost diadem is just stupid and unrealistic. And that is THAT.

Lupin was so afraid of what would happen to his unborn child with Tonks that he leaves them and offers to help Harry, Ron and Hermione on their quest to hunt down the Hallows. Harry turns around and accuses him of being a coward by abandoning his family, which causes Lupin to return to them and make Harry Godfather.

What was such an important part of the book doesn't even exist in the movie. Why. Why would you leave it out. WE NEEDED CLOSURE YOU MONSTERS.

Harry using the Cruciatus curse on the Carrows

The best thing about Harry is that he's flawed. He has a temper, and he's not too noble or good and when one of the terrible new teachers at Hogwarts spits in McGonagall's face and Harry successfully curses Amycus in retaliation, it is AMAZING. Especially when McGonagall's first reaction is to berate Harry for doing it. Oh you guys.

YOU SNAPPED THE ELDER WAND BEFORE YOU FIXED YOUR OWN WAND HARRY HOW STUPID CAN YOU BE?!

If you were one of the people who wanted Peeves in the films, come off it. He was annoying enough in the book. What part did you miss the most? Tweet us @sofeminineUK!