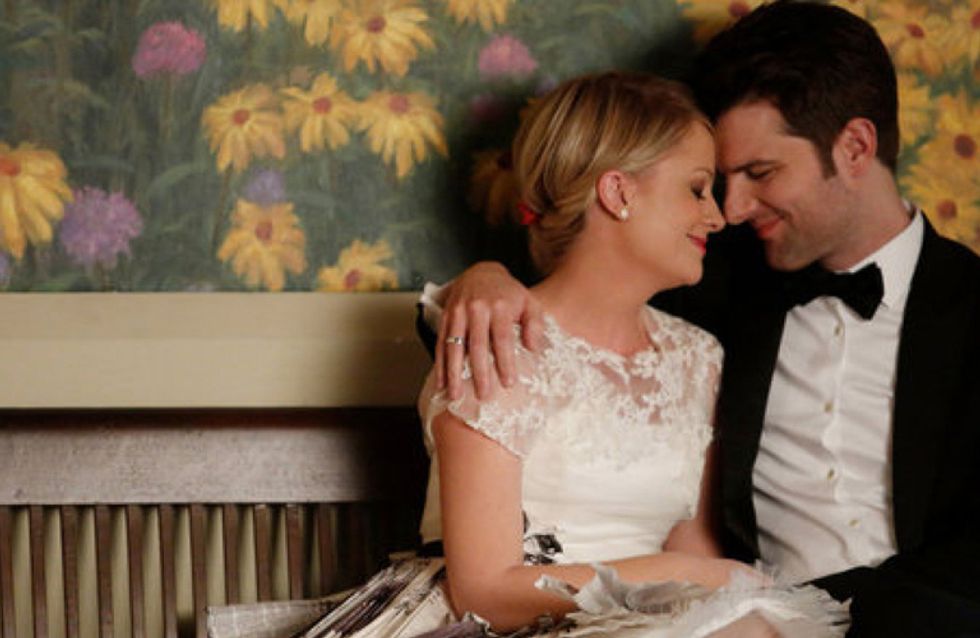 Parks and Recreation is a delightful comedy following Leslie Knope, a passionate government employee trying to improve life in her hometown of Pawnee one broken swing at a time. It also just happens to be the best show ever created. During the show's seven-season run, it gave us some of the most beautiful relationships we've ever seen - not just on TV, but ever. So forget about The Notebook, here's some pearls of relationship wisdom from Leslie and Ben and the rest of the Parks and Recs gang..

Andy and April are a loved up yet totally immature couple, and their relationship basically gives us a reason to live. While April is the Princess of Darkness, Andy has revelations that his favourite food is butter and spends more time as his alter ego, Burt Macklin, than as himself. But they still manage to be SO FREAKING CUTE together!

2. Your best friend can and should be the love of your life - and vice versa

It's not all about finding a husband or a wife if you have a BFF because that means BEST FRIEND FOREVER. Leslie and Anne are the very best two friends that anyone could have, which comes across in Leslie's many-a friendship scrapbook and Anne's reluctance acceptance of continuous, loving praise.

3. It shows you what marriage really should be about

Someone who you're excited to live with and see all the time. If you don't light up when you see them, they are NOT your Ben/Leslie soulmate! Even when they have triplets (spoilers but come on, the finale was AGES ago), they are a team and freaking love hanging out with each other.

4. You should always think about the other person

If they love mac and cheese and pizza, for Gods sake put both of those things in one place and, much like Ben's beautiful pizza-related romantic gesture, it will not go unappreciated.

5. When you're in love you'll sacrifice anything for the other person

Even if it means your JOB. Dammit Ben, you beautiful elf King you. He loses his job to stay in a relationship with Leslie as they are both government officials and technically he is her employer. He gives up his livelihood for the woman he loves, what could be MORE romantic than that?! Ben is like a modern day Mr Darcy, but cuter. Oh Ben. Lovely Ben.

You'll know it when you see it! You might not need to get married after dating for a week, but if it's right you'll feel it like Andy and April did!

7. You shouldn't EVER forget how brilliant a person your partner is

Appreciation goes a long way and sure after 5-10-15 years it might be difficult to get along all of the time, but you chose that person for a reason and you should never forget it!

8. Have faith in the other person, no matter what

HE NEVER EVEN WROTE HER SPEECH FOR IF SHE LOST (sobs heavily).

9. You should remember that compliments never go amiss

Even if they're a bit weird. Leslie is the absolute Queen of the weird compliments. Don't even get us started on what she says about Anne, that beautiful sophisticated newborn baby.

10. You should support each other no matter what

Ben is the Michelle to Leslie's Obama, and he's cool with that. Because that is what being in a relationship is all about ya'll!

11. Opposites attract so if you have nothing in common it doesn't matter!

April likes nothing and Andy likes EVERYTHING. They are basically a match made in heaven.

12. Domestic life doesn't have to be dull

Being spontaneous never hurt! Andy and April are the best as being spontaneous, from refusing to buy grown up stuff at the store and buying marshmallow guns to constantly role playing as an FBI agent and a criminal mastermind with a terrible British accent. They never let their relationship get boring, and we would like to be them, please.

13. Be encouraging of each other's dreams

Bonus points if you give them a Game of Thrones related nickname. Reason #90373 we will love Ben Wyatt to the ends of the earth.

14. Love is blind (thanks for that one Jerry/Gary/Larry/Gerry)!

Jerry and his wife Gayle prove that love is blind, much to the confusion of the rest of the office. We love that Gerry has a happy home life, especially as when he's in the office everyone is ruthlessly mean to poor old Gary. Poor Larry.

Be in tune with each other and just like that you can have new dinnerware!

16. Don't stress over the little things

Even if your engagement ring is an already-eaten ring pop. Relationships are all about taking the rough with the smooth and compromising. So what if Andy ate the sweets part of her ring? She got to keep that ring. And that, ladies and gents, is what compromise looks like!

17. Complement each other, even if you look a little silly.

18. Try to get along with family members

It'll make all the difference, even if they are totally crazy and/or drunks.

19. Try to resolve your conflicts sensibly

Things don't always go smoothly but it all depends on how you handle it! For example, Leslie is always determined to prove that she's right (because she is mostly), while Ben is much more laid back. But discussing your differences makes you stronger, okay?! Just look at them!

20. Because you know you love each other really

21. Always have time for yourself

You don't have to be selfless 24/7, as Donna and Tom like to point out. Sometimes it is necessary to treat. yo. self.

22. Never give up finding the right person

We'll leave you with the wise words of Ron Swanson.

What's your favourite Parks and Recs relationship? Tweet us @sofeminineUK!

by Emmy Griffiths
1 425 shares
For all the best videos, memes and shareable news!