The cold winds are rising, and Christmas rises with it. That's right, now we've hit November its time to begin wrapping presents and guzzling mulled cider, and we have come up with everything from stocking fillers to presents suitable for a King for the Game of Thrones fan in your life. So prepare yourself with our essential GoT gift guide as Christmas is coming...

Who said hand soap was a rubbish gift?!

Who wants snowmen and elves when you can have dragons and direwolves?

Preparing grand feasts for your guests is suddenly that bit easier!

The perfect mug for the singleton Game of Thrones fan in your life.

Who doesn't want their very own direwolf after all? #Betterthandragons

WHERE ARE MY FERRETS?!

A minimalist and classy addition to any wall.

A must have for any Christmas tree!

Even in Pop! form, Jon Snow is grumpy.

Trending up the Game of Thrones game!

The perfect stocking filler gift, particularly if your friend ships Brienne and Jaime (and let's face it: who doesn't?!)

Dry up in style.

This could probably get as brutal as Game of Thrones to be fair.

Choose your allegiance while making a cup of tea.

The most subtle way to fangirl!

Get your own bargain Jon Snow sword and kill lots of mini White Walkers!

If the Starks and Targaryens aren't your cup of tea, almost every other House great and small also comes in mug form!

Bring back the old fashioned way of communication - with letter writing! Maybe sent it via the Royal Mail rather than raven though...

Keep your papers in place with style.

25. The World of Ice and Fire: The Untold History of the World of A Game of Thrones Book, £30

Ever wanted to expand your Game of Thrones knowledge beyond the books?!

A must-have for everyone who is #TeamStark, ill-advised as that may be...

You can playing other games besides the Game of Thrones you know!

Because not every couples gifts have to be lame!

Take the three-eyed raven plush to bed and have visions like Bran.*

*This will not actually happen.

You can't smush a lego man's brains in after all.

For quick decisions, browse our Game of Thrones gift album... 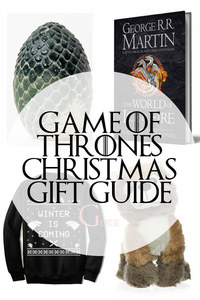 Any of these take your fancy? Tweet us @sofeminineUK!

This piece was written by Emmy Griffiths. Follow her emmyfg!