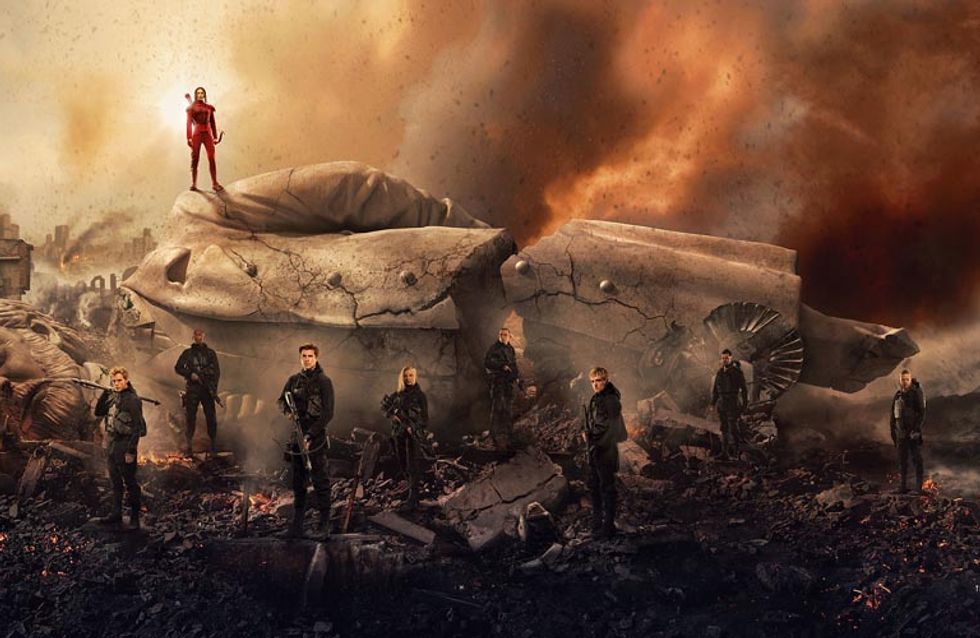 Book fans of The Hunger Games franchise have been waiting for this moment ever since the final novel of the trilogy was published way back in 2010. Since we at SoFeminine were lucky enough to see the final movie of the franchise early, we think its safe to say that the book fans will LOVE this movie. Here are the best moments we know the book fans will love but be warned! Spoilers ahead...

The movie are unwaveringly faithful to the novel apart from this one thing (oh and Avox's, of course. And the heartless shrugging off of the Mayor's daughter Madge). Instead of bringing Delly in to talk some sense into Peeta, they decide to bring in (SPOILER LAST CHANCE!) Prim! Yep, its Prim who ends up trying to convince Peeta that Katniss isn't a mutt, and it doesn't work all that well. Speaking off...

Guys, you are going to be heartbroken. Poor Peeta is every bit as confused and damaged as he is in the novel, though it might help if we tell you that his miserable episodes seem to be sorted out much more quickly in the movie than the novel (which is great because even watching him lash out at the beginning of the film is more than enough).

​We're not sure why, but there's something about taking a much-loved character and tearing their character to shreds that we never especially loved about the books, but we kind of like how the film handles it.

Get ready for the most horrendously intense scene from the entire four film franchise put together, also known as the time where we say goodbye - deep breath - goodbye to the beautifully sexy baby angel that is Finnick Odair.

The whole scene had us genuinely hiding behind our fingers (and we don't scare easily)! If you hated Mutts before, you might want to hide behind for popcorn for this bit.

As usual Jennifer Lawrence is unsurprising an absolutely freaking stunner of an actress, and her grief at the loss of YOU KNOW WHO (oh come on, we've said 'spoilers' like six times already. Its Prim), is held back until the moment she finally sees Buttercup back in District 12, and by that point you are just waiting for the meltdown, it happens, and it is awful. Be ready to weep for Prim, Katniss, Buttercup, District 12 and for your own broken heart.

The assassination of President Snow

The theatricality of it all actually had a few people nervously laughing in the audience. It is so intense yet so clear what Katniss is planning to do when she aims that bow and arrow, much more so than in the novel. The movie manages to make it clear that Coin will eventually go down the same road as Snow, and there is a general satisfaction when Katniss purposefully misses President Snow for Coin.

Give whoever created Tigris's look ALL of the makeup and costume Oscars because this was genuinely how we'd imagined her when we read the books. Speaking of which, all of the scenes with Capitol residents (and food) were excellent, especially when you saw it from Gale's point of view when he realises everything he has been missing out on.

Gale's anguish and misery at the attacks on the Capitol along with Katniss's silent fury make this scene carry so much more weight than the quick goodbye they have in the novel. Its almost as if they know and we know that Gale was the one who accidentally killed Prim, and it is tough to watch (but sorts out that whole love triangle thing, no problem).

They are visually stunning but also freaking TERRIFYING. We were never too fussed about the booby traps in the novel as let's face it: we knew Katniss was going to dodge those booby traps till the bitter end, but in the books every threat definitely got our attention: from walls of fire to flood of tar (bleurgh).

Are you looking forward to Mockingjay Part II? Tweet us @sofeminineUK!

This article was written by Emmy Griffiths. Tweet her about Mockingjay @emmyfg!

The Huntsman Character Posters Are Here And They Are Simply Gorgeous

Adele's Latest Single Is Here And It's Even Better than 'Hello'