Pitta Pockets And Fondling Fondant: 8 Things You Need To Know About GBBO Episode 5

by Pascale Day Published on 3 September 2015 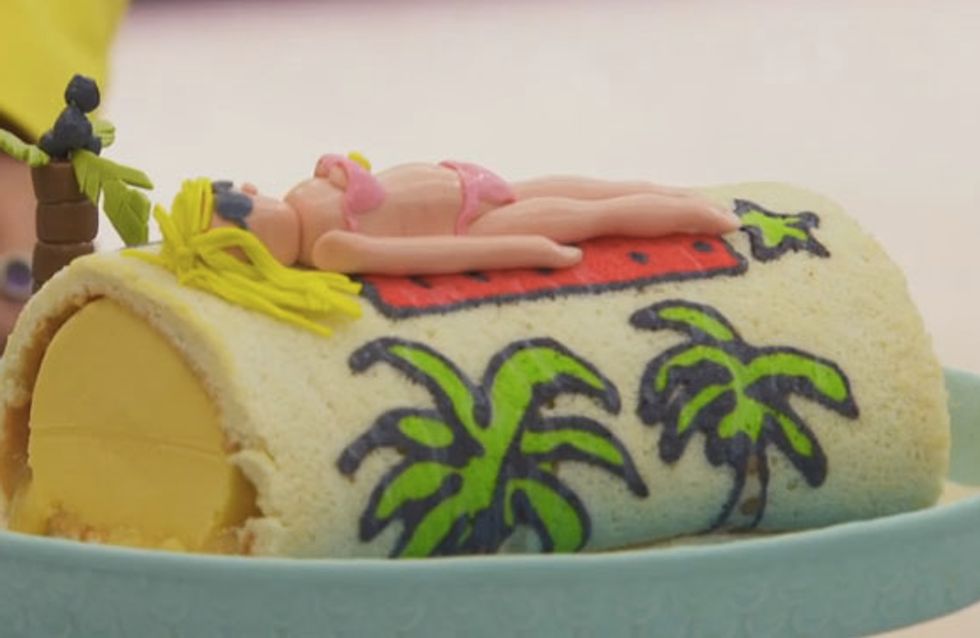 It's been a year since the bakers were asked to make a family favourite dessert made from ice cream, and we all remember how that turned out. (#Bingate, anyone?) This week it was all about taking a cake and ruining it, which can only mean one thing: it's the Alternative Ingredients week.

1. Alvin's cake was so simple it made him worried

This week Alvin's cake for the no-sugar signature challenge was a pineapple upside-down cake. "Simple, classic," says Alvin, uttering the two words that are basically banned in the Bake Off tent. Has Alvin forgotten where he is? After about half an hour, Alvin's cake was done. It looked good, but it panicked Alvin. He even had time to get in a bit of light reading, as Ugne make a checkerboard from her quinoa flour cakes, and Nadiya blitzed up some jam from basil seeds. Despite this, Alvin's cake was a hit with Hollywood, who took nearly as long a pause to tell him it was 'superb' as Alvin had been waiting for the other to finish their bakes.

2. Turns out Tamal might actually just be a pretty face

Tamal, it seems, is not so great at maths. "It's fifty percent grapefruit juice, fifty percent blood orange juice, and then some honey as well.' Errrrr? But he soon realises the error of his ways: '...so it's not actually fifty percent of the others...Aaah. Maths...' Slightly worrying since he administers injections to real, living people in his day job and not just to sugar-free cakes.

3. Ugne continued to make bakes that were designed to scare the sh*t out of children

One time at a festival, I saw a guy crying-screaming in front of a puddle because he thought there was a whole load of mutant rats scurrying out of it. And still I think that hallucination is less scary than the things Ugne creates.

It's like she takes something that has potential, adds one ingredient to ruin the taste and colours it with shades that you find in puke. Her bakes are genuinely scary, and it is for that reason that Ugne left the tent and was asked never to return.

4. We found out about the EMERGENCY FREEZER

Turns out sometimes a regular freezer just isn't enough to freeze stuff. Like, it freezes stuff, but it doesn't freeze freeze stuff. Y'know? When Ugne's arctic roll was refusing to freeze properly, she took it out of the normal freezer and put it in the special freezer next to her work station. Because, if it doesn't freeze in one freezer, it will probably freeze in a closer freezer. Turns out the emergency freezer doesn't work that well, because when she presented her peanut butter/grape jam catastrophe to Mary and Paul it looked like she had accidentally left it in a hot car for a couple of hours.

5. Everyone was on a mission to take down Ian

Everyone was ready and prepared to overthrow Bake Lord Ian. 'Watch out Ian!' said Alvin, with a laugh way to extreme to be genuine. Even Paul seemed determined to knock him down a peg or two, telling Ian his cake flavours were the "wrong choice": "Pear's not going to bring anything to the party," he smirked, the glee spreading across his hairy, evil face. The other bakers were determined to recreate Ian's success by watching him extremely closely, with Mat even attempting to cool his cake by wafting a baking tray over it in exactly the same fashion as Ian. But the pressure proved too much and the Bake Off crown was passed to Nadiya for her impressive pittas.

7. Welsh Paul made a fondant lady

First it was a bread lion, now it's a buxom fondant sunbather. Paul took on Ian's dessert desert island in the showstopper, and Ian's rubber duck didn't quite make the cut. Instead, Paul was busy creating a bikini-clad lady to put on his beach scene, crafting her with particular care - especially when it came to her 'gusset' and the fondling the ol' fondant boobs; caressing the bosom to sugary perfection. Paul Hollywood was particularly impressed - well he would be, wouldn't he? - despite cutting into the sunbathers torso with the kind of gusto that scares me a little.

6. Alvin didn't know what a pitta looked like and it was heart-wrenching

Alvin had never seen a pitta before. At first, he is convinced he has, until he says that he's going to make them into triangles, and starts to think it may actually be naan breads he's thinking of (which are in fact more of a tear drop shape, not triangular).

​Alvin goes to ask Mat and Paul, who are tensely huddled together, what shape their pittas will be. Mat immediately scuttled back to the safety of his workstation like a beetle finding shelter under wood, but Paul stood his ground and didn't give any indication of what shape he would be creating. Alvin's pittas coincidentally turned out pretty terribly, looking more like bread than pittas - but what does Mary and Paul expect, when Alvin's never seen a pitta before? Add to the fact that these were gluten-free, which is the worst kind of pitta. Even Paul Hollywood, bread extraordinaire couldn't stop his introductory pittas from looking like reformed sick.

8. Mat didn't know what an arctic roll was, which is worse than Alvin and the pitta bread thing

As everyone else took on the seventies classic that is the arctic roll, Mat attempted to make a dairy-free ice cream swiss roll. Mat's creation was successful on the dairy-free front, but also ended up being nearly ice cream free, too.

​Mat, who seemed to be unaware of what an arctic roll looked like, began to roll his ice cream and sponge concoction, only for the ice cream to squirt out of every available opening in a rather unsavoury fashion. In the end, the only thing that saved him was the fact that Ugne's bakes are so hideously nightmarish that Mary took one look at her arctic roll, had an LSD flashback, and threw Ugne out of the tent.

This article was written by Pascale. You can follow her at @Pas__

What did you think of last night's Bake Off? Let us know! @sofeminineUK​

All Hail Ian, The Cheesecake King: 10 Things You Need To Know About GBBO Episode 4​

Fear And Loaving: 10 Things You Need To Know About GBBO Episode 3