Shia LaBeouf is one odd sausage. He was once a Disney kid who made us laugh with his antics in Even Stevens and Holes before coming off the rails by getting arrested, pulling out his own teeth for film roles and, perhaps worst of all, getting into Twitter spats with Frankie Muniz. Now the oddball celebrity is live streaming himself watching his movies back-to-back in a project called #ALLMYMOVIES, and we've been oddly transfixed for the last hour...

Shia LaBeouf is once again making a splash and once again no one quite knows what to make of it. For the next two days he will be sat in a cinema in New York watching all of his films back-to-back, from Man Down, which was released earlier this year right to his earliest project, The Christmas Patch from way back in 1998. The best thing about it? You can actually watch him as he watches them. Seriously, this is his face RIGHT now:

From The Even Stevens movie to Nymphomaniac, Shia LaBeouf's filmography is a journey from Disney happy endings to dark art house movies, which is pretty metaphorical of Shia's own radical transformation for the mop-haired loveable underdog to that guy who cut his own face up as he thought the makeup was too unrealistic for Fury and appeared in an art project called #IAMSORRY, in which individuals would sit with him as he silently sobbed.

The project began yesterday and is due to go on for another couple of days. The movies are being shown in reverse chronological order so yep, you still have time to watch him watch Charlie's Angels: Full Throttle.

We have been watching him for the last hour, and there is something transfixing about watching him watch his own movies. We're not sure what he's trying to symbolise by putting himself through what must surely be a somewhat torturous and exhausting experience (seriously, have you ever seen Transformers 2?), but it's clear which movies he is proud of and which he can't handle - just look at his reaction during what we can only assume is Transformers 3!

Here are our favourite facial expressions from the project so far, go here to see him for yourself! 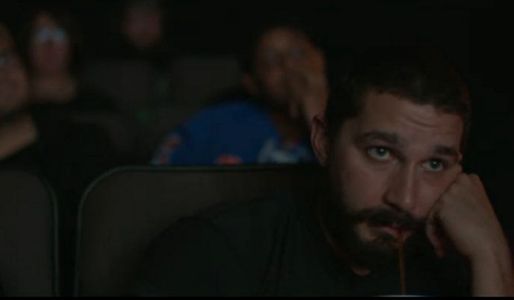 ​Want to watch him watch a particular movie? Check out his schedule below...

What do you think you think he's trying to say with this project? Tweet us @sofeminineUK!

This piece was written by Emmy Griffiths. Tweet her about #ALLMYMOVIES ​@emmyfg!