Amanda Bynes is back! Star has been secretly discharged from rehab

Following Amanda Bynes' erratic and somewhat bizarre behaviour in the last several months we were so relieved to see her check-in to rehab for some much needed help. And just in time for the Christmas holidays, sources have confirmed that she’s completed her inpatient rehabilitation and is doing “very well”. We can’t wait to take the first glimpse of the new improved Miss Bynes!

Yay, the former Nickelodeon star, Amanda Bynes, 27, has been discharged from a Malibu rehab centre this week according to RadarOnline.com.

For the past several months the Hairspray actress has been receiving treatment at the rehab centre where she was diagnosed for schizophrenia and bi-polar disorder. She’s currently recovering at her parents' home in LA where she plans to spend the holidays.

A source said, "Amanda was released in the last several days, into the custody of her mother, Lynn. Amanda is doing very well, in fact, she is doing great.”

Her mother Lynn was recently granted an LPS conservatorship (making Lynn responsible for her daughter) when Amanda was put on psychiatric hold after the starlet started a fire in a driveway in Thousand Oaks, California.

According to her parents, they had suspected Amanda was suffering from a mental disorder when she was younger, but had never considered their concerns to be serious.

A family friend reported to RadarOnline.com, confirming her dual diagnosis. The source said, “while Amanda was being treated at the UCLA Medical Center….she does indeed have schizophrenia and bipolar disorder. It was what Amanda’s parents, Rick and Lynn, had suspected all along.”

After switching clinics a few months ago the troubled star began making drastic improvements. There’s no word on the street on what Amanda plans to do now, but the source noted that she’s being “closely monitored.”

The source added, “If Amanda needs to get further inpatient treatment, she will.

“[She will] continue to see her doctors and adjust back to living her life. It will be very controlled and supervised.

“The outlook for Amanda is very, very good. She will need to be compliant with her medications, but she’ll be a functioning member of society again.”

It was only a few weeks ago when we heard rumours of the star gearing up to leave rehab so we're beyond happy to hear the news! It’s awesome to know when a celebrity is taking such strides towards full recovery.

​But now that she’s much better we're guessing there'll be no more OMG tweets. We wonder what her first post will be on social media again?

Her next court dates come in the New Year, 7th January 2014, where both parties will re-evaluate her condition.

What do you think Amanda's next move is? Tweet us @sofeminineUK 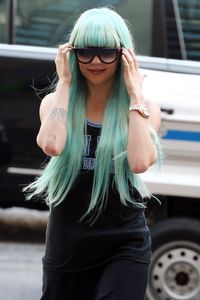