The two leading ladies co-star in upcoming crime drama American Hustle about a con man who is forced into working for the FBI along with his mistress. Since Jennifer Lawrence plays the con man Christian Bale's wife, and Amy Adams plays his mistress, we suspected there would be some serious rivalry between the characters, and apparently that struggle to get the upper hand accumulates in one big snog between the girls! Which apparently Amy Adams rather enjoyed...

Amy Adams and Jennifer Lawrence kiss in their new movie American Hustle, and it sounds like they had a hilarious time filming it.

The film, which boasts a star-studded cast including Christian Bale, Bradley Cooper, Jeremy Renner, Amy Adams and Jennifer Lawrence, sees the girls go head-to-head as the wife and mistress of the character Irving, played by Bale.

According to E!, Amy was extremely complimentary of Jen’s kissing technique.

The 39-year-old said: “She’s awesome. It's funny because after the first take of that, I ended up with lipstick out to here [gestures all around her mouth].

“She has very full lips - and also playing somebody who's not puckering for a kiss, it’s really interesting how a kiss hits you when you're not participating in it."​ 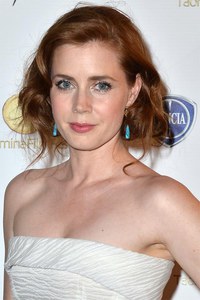 Looks like Amy is zoning in on our girl crush! Apparently Jen couldn’t handle the snog though, and had to bail out of the room for a few minutes to laugh herself into oblivion.

Amy continued: “I looked in the mirror, and it’s meant to be this really dramatic moment, and I can hear her out there laughing and I'm laughing because she pulled back and looked at me and ran out of the room.

“And I hear her laughing, and I couldn't figure out why she was laughing at first and then I look in the mirror and I'm all serious and I was like, 'Well, that's not gonna work.' I looked ridiculous.

"Jennifer pulls it off wonderfully because you believe it again as part of the character. It doesn't feel like this salacious, sexual kiss between two women. It’s part of her struggle for control."

The 22-year-old actress Jen admitted that she wasn’t too sure about the idea to begin with and was confused about why they would be kissing.

She said: “[The director] brought it up to me and was like, ‘Amy thinks that you should kiss her in a scene,' and I was like, 'What? Why?' I didn't understand it. Then when we started the scene, it completely made sense.

"[My character] has a toxic need to be in control and to overpower a situation. I did not think it made sense before David called action and then as soon as we were in the scene, it happened organically because it was just so true."

​​It’s nice to hear that Amy and Jen get along so well!

Will you be checking out American Hustle? Tweet us @sofeminineUK