Angelina Jolie and Brad Pitt look every bit as happy, glorious and generally WAY better looking that we will ever be now as they did a decade ago when they first met on the Mr & Mrs Smith set. Their love certainly has lasted the test of time, and these two are such freaking charitable, talented and graceful uber-humans that we want to look back at their relationship in pictures and just sigh together. Shall we?!

Here are Angelina Jolie and Brad Pitt getting pretty cosy in Mr And Mrs Smith - the movie that will always be remembered as the one responsible for bringing these two together (and not for its cinematic quality)...Oh yeah and as we might have mentioned, it marked the beginning of the whole Jen v.s Ange debacle THAT LASTED LIKE A DECADE.

It's no wonder these two fell in love though, the only thing that was actually decent about this film was the sheer chemistry between them. Seriously, that kitchen fight? Knives may have been flying but so were SPARKS.

Although Brad and Jen never had kids themselves, it didn't take long for Angelina to get pregnant with their daughter, Shiloh. Ange already had three adopted children (ten points to anyone who can name the Jolie-Pitt kids?), we'll just tell you: Maddox, Zahara and Pax. Brad adopted them as well, and just like that, the relatively new couple had three kids together.

Angellina gave birth to Knox Leon and Vivienne Marcheline on 12th July that year. LOOK HOW CUTE. Just a quick reminder, this made the tiny twins the youngest out of the Jolie-Pitt gang of six. Are we a little disappointed that Brad and Ange haven't taught them to sing like the Von Trapp family yet? Yes. Are we hoping this will happen in the future? Yes.

Angelina Jolie caused a stir with her long, skinny leg at the Oscars with Brad Pitt in 2012. Nobody quite knows why...maybe the designer told her to or maybe she just wanted to start a new trend that went horrible wrong, but Ange just wouldn't stop poking her leg from the slit in her dress. Just STOPPIT!

5. Taking the kids out

Angelina taking her daughters Zahara and Shiloh to the Nickelodeon's 28th Annual Kids' Choice Awards where she won Best Villain for her role in Maleficent. Look how much fun they're all having together! Girls trip girls trip! We can only hope that around this time, Brad was taking Maddox and Pax to a basketball game or something, while Vivienne and Knox were on some celebrity playdate. Hey we can dream can't we?!

In 2014 Angelina and Brad finally married, after always saying they would when their kids asked them too. We wonder which kid it was that finally popped the question? We're going to go with the twins, they look cheeky.

In the spirit of family values, Angelina had drawings from her kids decorating her otherwise simple wedding dress (because nothing says love of your children than letting them deface your pure white wedding gown).

She told People magazine: "I wanted the kids to be a part of everything including the dress because that's our family; that represents the way we live our life together." Apparently one of them had written 'buttocks' on the dress. Nice one kids. Nice one.

7. The whole family together

The People photoshoot for the big day saw the whole family: Brad, Angelina, Maddox, Pax, Zahara, Shiloh, Vivienne and Knox Jolie-Pitt enjoying themselves. Well, most of them anyway. As it is clear Maddox and Pax are NOT enjoying themselves at this precise moment. Gah they look like such moody teenagers! Change the wifi password and teach them a lesson parents!

Brad and Ange bring along Maddox to the Entertainment Governors Awards - they look like such a good team! We're just wondering how bored Maddox was once the award show got going. Those things always sound a bit dull and with none of his siblings around we're guessing he was pretty fed UP.

9. Night out without the kids

The couple are as cool and collected as ever at the 15th Annual AFI Awards earlier this year. It's not often to spot Brangelina without their little ones, so enjoy it while it lasts! Ange definitely had no time for any nonsense dresses though, sticking to her smart trousers and shirt look while Brad rocked on of his silly hats (don't get us wrong, we love Brad, but he does have terrible taste in hats).

The pair meant business when Ange co-chaired at the Global Summit To End Sexual Violence In Conflict, a cause that is close to Angelina's heart. This right here? This is a power couple people.

Check out the other amazing moments from Brad and Ange... 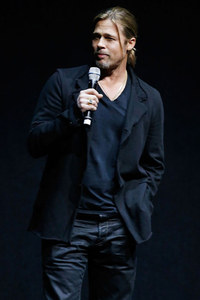