Selena Gomez is one of the more wholesome and sweet Disney stars. So no wonder it was a shock to the audience at the KIIS FM charity Jingle Ball when she suddenly dropped the F-word and then unceremoniously stormed off stage. The 21-year-old’s tantrum was supposedly due to sound problems, which caused Selena to lose patience and stop the performance early. We blame Bieber for teaching her bad language!

Selena Gomez has shown that she’s no longer a sweet and innocent Disney star after saying the F-word to a packed out crowd at the Jingle Ball.

Soon after, the furious singer supposedly stormed off the stage as the audience at the L.A. charity event looked on gobsmacked.

Allegedly Selena – who is now single after splitting with Justin Bieber – lost patience after sound issues which affected her entire performance.

Clearly she’s picked up the Biebs' bad language, as at the end of her song, she can quite clearly be heard shouting: “What the f***?!”

According to UsMagazine.com, before her outburst Selena had shouted out: "Sorry, the sound isn't working! Are you guys having a good night? I promise, a lot cooler people are gonna come out tonight.

"Is it okay if I perform two more songs and you guys can get to it?"

Reportedly in an attempt to get the problem fixed, Selena tried to delay her set for a few minutes to try and give audio technicians enough time to sort it out, but her short set was still dogged with issues.

Putting on a brave face Selena told the crowd of youngsters: "I have to thank you guys so much for allowing me to be able to perform the music that I love.

"And I have to say that before you guys go on to the people that you care about, I really appreciate you supporting everything that I do. 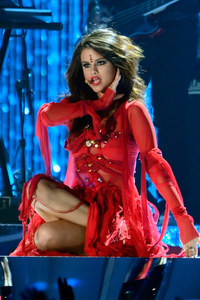 But it was that song which was the final straw, and as the lights came down Selena vented her frustration by swearing and storming off (not the best thing to do in front of a bunch of kids, Selena!).

Unfortunately for Selena, her tantrum was caught on camera. An eyewitness revealed: "She was p****ed doing the next song and she said two more songs. She didn't do the last one."

Meanwhile that wasn’t the only noteworthy incident that evening, of course Miley Cyrus had to show up and make headlines as usual.

Dressed in a tiny red sequin crop top and matching pants, the Wrecking Ball singer twerked all over Santa – Santa? Really Miley! – whilst singing into a candy cane microphone.

Backstage Miley continued to have fun with Father Christmas, tweeted a snap of her holding her microphone in between Santa’s legs, alongside the caption: “Bad Santa.”

Macklemore, Robin Thicke and Ariana Grande also performed at the event to help to raise funds for the Ryan Seacrest Foundation, but they managed to behave themselves on the whole.

Are you surprised by Selena’s outburst? Tweet us @sofeminineUK!