The Amazing Spider-Man co-stars Emma Stone and Andrew Garfield have been shacked up together for over a year now after meeting on set, and our spidey sense is tingling all over about their future plans. Rumour has it that they have been talking about getting hitched and starting a family!

Andrew Garfield and Emma Stone have apparently started discussing getting hitched and starting a family together.

The two met in 2011 on the set of The Amazing Spider-Man, where they played onscreen lovers Peter Parker AKA Spider-Man himself and Gwen Stacey, and quickly became everyone’s favourite Hollywood couple.

They reportedly moved in together in early 2012, and rumour has it that they are now ready to take it to the next level, as an insider revealed to Us Weekly: “They want to marry and have a family. They’re discussing it.”

You’re discussing marriage, Andrew? There’d better be some upside-down kissing action involved in what we assume will be an elaborate Spider-Man themed proposal!

Although Emma is only 25-years-old, Andrew is now at the ripe old age of 30 – KIDDING – but sources claim that he is ready to start settling down properly.

The source said: “They’re madly in love,” but nothing has happened yet because “their schedules are crazy.”

It does sound like Emma in particular has a lot on her plate at the moment, as the Crazy, Stupid Love star has recently been in France shooting the new Woody Allen film, Magic in the Moonlight.

However, the two managed to spend plenty of time together over the summer as they shot The Amazing Spider-Man 2, and unless things have changed from filming the first instalment, Emma enjoyed working with her boyfriend, saying: “I don’t think you should try to explain the chemistry between two people – it’s either there or it isn’t.

“Initially, I was worried that The Amazing Spider-Man was going to be all CGI and green screens. But then I got the script, which had these incredible scenes between Peter and Gwen with real emotion and heart.

“The final audition – where they had me in full costume and hair to shoot scenes with Andrew – convinced me to take the part.”

Of course working with Andrew convinced her to take the part – they are perfect for each other! 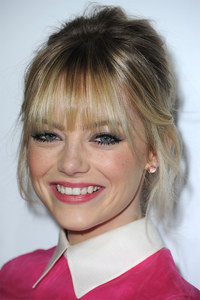