Brad Pitt clearly likes to live life on the edge. The father-of-six is currently in the English countryside shooting his new World War Two movie Fury with Shia LaBeouf. Nearby where they are filming is notorious prison The Mount in Hertfordshire, which has given Brad a bright idea – why don’t they get the convicts from the penitentiary to be extras in the film? Yes Brad, that sounds like, erm, an ‘interesting’ suggestion…

Brad Pitt has made a bizarre request to see if real prisoners from a high security men’s prison in Hertfordshire can be extras in his latest movie Fury.

The film – due out in the UK October 2014 – will follow a crew of Americans behind enemy lines in Germany towards the end of World War II, as they embark on a brave mission against the Nazis.

The brave actor is reportedly keen to use Category C prisoners from the nearby institution The Mount as extras, despite the fact that they are branded as inmates who “cannot be trusted in open conditions.”

The 49-year-old father-of-six has been shooting the new World War Two flick in the Chilterns, only yards from the convicts. 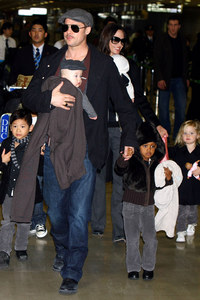 A source on the set of Fury told The Daily Star: “Brad is fascinated that the prison and 800 caged men are so close to where he’s working.

“He’s requested a visit to The Mount and has asked director David Ayers whether any of the prisoners could be used as extras as part of their rehabilitation and educational programme.

“Brad is always trying to improve and help wherever he sees possibilities, something he’s learnt from his years with Ange.

“And despite the severity of some of the crimes the prisoners have committed, he wouldn’t be nervous at all about working with the inmates.

“He’s someone who believes in second chances.”

Most people would jump at the chance to not only star in a Hollywood film, but to also work alongside Brad Pitt, so it’s no surprise that the inmates are reportedly over the moon with the possibility.

The insider continued: “They’ve become very excited about having a big blockbuster filmed on their doorstep.

“And the staff are just as thrilled as the prisoners – all of them want to meet Brad.

“Some are even joking that it could be their ticket to stardom.”

What do you think about Brad Pitt’s plans to include convicts as extras in his new movie Fury? Tweet us @sofeminineuk.