by Emmy Griffiths Published on 7 December 2015 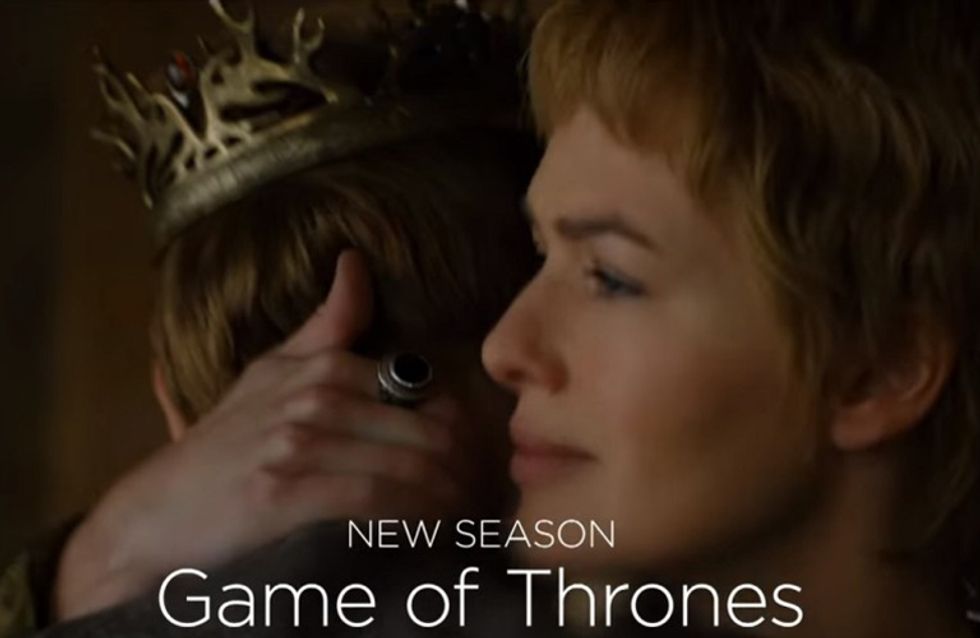 Now that we have had that mysterious 40-second teaser trailer of season six that shows Bran having visions, we have been clamouring for more Game of Thrones gossip and HBO has clearly been listening to our angry fandom cries. For it's year ender mash up promo, HBO finally gave us a glimpse of GoT, and we're ready to speculate!

We're not going to lie, they could have given us a little more insight, but hey! We'll take anything at this point, so naturally we are going to speculate on the three images shown in the trailer until we are given a full trailer. Starting with...

Cersei is rocking the pixie cut look, though we all know it's not entirely out of choice. It looks like she's lost her trademark smug face and instead looks miserable as she hugs Tommen. Has she found out about her daughter Myrcella's untimely death, or is she just sad that she was paraded through the streets naked as a nun screeched "SHAME SHAME SHAME" behind her? Only time will tell.

Still in the garb she was wearing when she flew from the fighting pits on her dragon, Drogon, Daenerys doesn't look like she's out of the woods regarding her current situation...AKA being surrounded by a hoard of Dothraki. We think she'll get the situation under her control, but at this moment in time girl is clearly in trouble!

We knew he was still alive and everything but URGHHH. Since his favourite playthings, Reek, sorry, Theon and Sansa escaped last season (but not before they killed the only one as psycho as he is - his bit on the side Myranda), we're guessing Ramsay is not in a good place right now. The fact that he's playing the good old Bolton banner might mean that he's on the way to claim Sansa back from wherever she might have ran off to, and we hope whether that is he is killed slowly. SLOWLY WE SAY!

See the blink-and-you'll-miss-it footage in the trailer here:

What do you think is happening in the stills? Tweet us @sofeminineUK!

This piece was written by Emmy Griffiths. Nerd out about Game of Thrones with her @emmyfg!

12 Nerdy Christmas Gifts For Your Nerdy Group Of Nerdy Friends