by Emmy Griffiths Published on 18 November 2015

We always knew Eddie Redmayne was the perfect choice to play Hufflepuff wizard Newt Scamander in the upcoming Harry Potter prequel, Fantastic Beasts And Where To Find Them, but now we have photo evidence that confirms it once and for all! Oh, you also see some other members of the cast, so let's begin theorising who they all are, shall we?!

In the most exciting development from Fantastic Beasts and Where To Find Them since we found out that American witches and wizards call Muggles 'no-maj', the first high-res images from the movie have been released and we have to say they look BRILLIANT.

From the 1920s-esque sets to the kooky costumes, the pictures include Eddie Redmayne brandishing a wand as Newt Scamander in the streets of New York along with still of the cast filming. Way to ruin the magic of cinema people!

Eddie Redmayne wears his Hufflepuff roots well dressed in a mustard yellow waist coat. He is also dressed up in tweed trousers, a frock coat and one amazing bow tie (cool). The pictures also show Katherine Waterston as the mysterious Porpentina Goldstein, and it looks like she might be saving Newt's skin on more than one occasion!

We'll take all the information on Fantastic Beasts that we can lay our hands on, though we think we deserve a trailer soon, right?!

Feast your no-maj eyes on these... 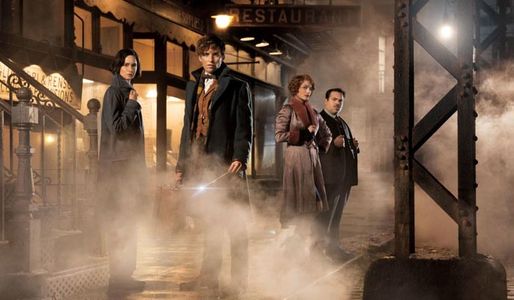 What do you think of the pictures? Tweet us @sofeminineUK!