Novels that are honest about mental health are hard to come by, and honestly? We're sick of reading books where people with mental illness are totally misunderstood (Mr Rochester's wife in the attic, anyone?) So, we've found the best novels that actually deal with issues such as depression, suicidal thoughts and agoraphobia respectfully. Here are our top ten favourites... 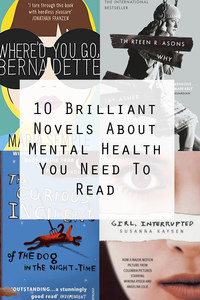 The semi-autobiographical novel follows Plath's experiences with clinical depression. It is a very truthful insight into a woman who is disillusioned with life and becomes increasingly despondent as she fails to receive proper help. What is even more heartbreaking about this tale is the real life story behind it. A month after the novel's publication, Plath killed herself.

All the Bright Places – Jennifer Niven

Theodore Finch is forever thinking of ways to kill himself when he meets Violet, a girl torn apart by grief following her sister's death. Meeting on a ledge, the pair stop each other from killing themselves and begin a friendship. It is a quick read which will make you laugh and cry (mostly cry, let's face it), without trivialising what the main characters are going through.

After a breakdown following discovering his wife having an affair, which lands him in a psychiatric hospital, Pat tentatively begins a new life with a new philosophy to always look for the silver lining in everything, improve himself and eventually get his wife back then he meets Tiffany, an equally troubled young widow grieving for her husband.

This novel will give you a brighter outlook on life and an insight into the struggles people go through when recovering from mental illness.

The Catcher In The Rye – JD Salinger

Just being expelled from school, Holden Caulfield wanders around New York in desperate loneliness, beginning to fall apart as he despairs over his life and humanity.

This novel is a classic as it speaks to people on a deep level. Although it was written in 1951, the protagonist's struggles with understanding the world are timeless.

Susan's memoir about her stay in a mental hospital in the 1960s focuses on her borderline personality disorder illness along with her fellow inmates whose illnesses include schizophrenia, drug addiction and depression.

It is a reflection on how mental illness can happen and Susan's experiences in her two years hospitalised at McLean hospital are a real-life look into this world, no frills.

A girl kills herself at school and sends tapes out to the 13 people involved in the decision, telling them the truth about why she did it and how they participated.

The novel focuses on depression and suicidal thoughts and how to recognise them, and deals with serious issues for teenagers including bullying and sexual assault. It is a important novel to read just as it shows how easily someone's life can fall apart and how to be aware of the signs that they are struggling.

This novel follows Christopher, a teenage boy who either has autism or Aspergers syndrome and decides to find out what happened to his neighbour's dog after it was stabbed to death with a pitchfork.

​It is a murder mystery all written from a point of view we couldn't possibly understand, and how a mind on the autism spectrum works. For example, the chapters run in prime numbers, and Christopher is as confused about the emotions people exhibit around him as we are by the mystery of the dog.

Bernadette is an agoraphobic who dislikes everyone except for her daughter and her husband, and who's behaviour becomes increasingly erratic as a dreaded trip to the Antarctica grows closer.

Although this book is a light-hearted comedy, the inner machinations of what is going on in Bernadette's head is a brilliant insight into how people react to trauma, and how to deal with it.

After giving birth, a married unnamed woman is put into a room to rest and recuperate (it is assumed that she suffered some sort of breakdown/depression following childbirth). As such, she is given no stimulants such as books and as such grows obsessed with the patterned wallpaper in the room, falling into madness.

The novella, written in 1892, sets out to show how women were damaged by medical oppression at the time, as rather than get help for mental illness they were forced to stay on bed rest, discouraged even to write.

The Perks of Being A Wallflower - Stephen Chbosky

This novel is a coming-of-age story in which Charlie, a quiet unassuming teenage, begins high school after losing his Aunt in a car crash and his best friend who killed himself and finds himself befriending a group of older kids.
​
However, after becoming romantically involved with a girl in the group, Charlie begins to remember being sexually abused by his Aunt which he repressed due to his love for her and his guilt in her death. It is a sensitive subject which is handled respectfully and makes for a brilliant read.

Are you going to read any of these novels? Tweet us @sofeminineUK!