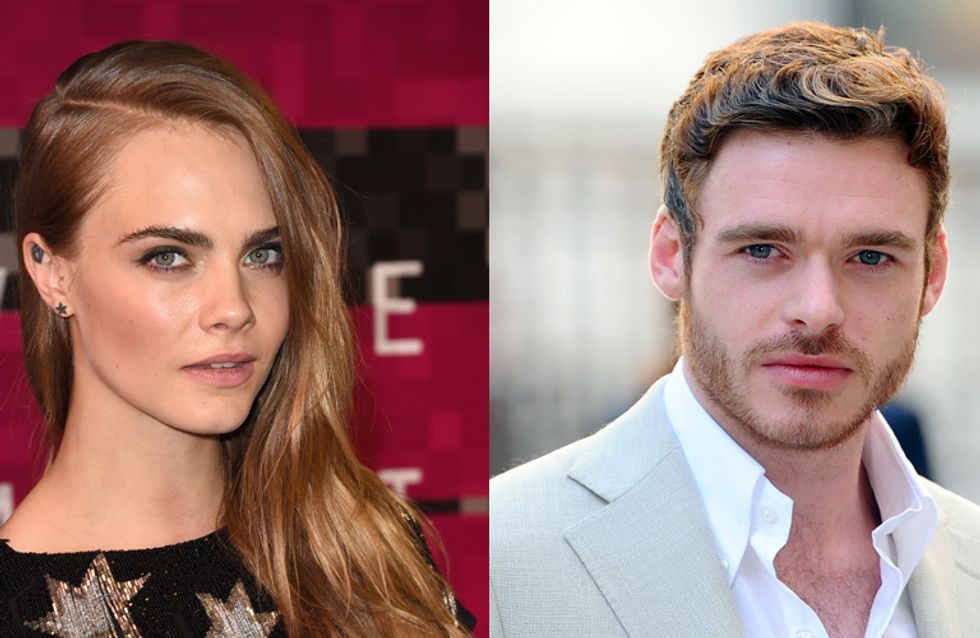 Game of Thrones star Richard Madden and Cara Delevingne have gotten into a bit of a misunderstanding after Richard spoke about her infamous grouchy interview from last month, suggesting that it "showed her age". Cara angrily responded to Richard on Twitter and as much as we love a good old Twitter spat, we like these two too much to enjoy the fighting. Make up guys, please?!

In case you'd forgotten, Cara Delevingne had a particularly awkward interview with Good Day Sacremento a while back where she answered the enthusiastic hosts' questions in a deadpan manner, leading the hosts to believe she was in a bad mood.

Although Cara claimed it was just a British sense of humour, we were somewhat divided by her attitude. Like, sure she was clearly kidding and the questions were a bit silly, but she was promoting a movie so she should have kept it positive, right?!

Richard Madden clearly thought so. In an interview with Style magazine, he said of her interview: "It made her seem ungrateful. She showed her age. For Cinderella I did six weeks of those interviews, where you get asked the same eight questions...Cara can't exercise good manners then perhaps acting isn't for her. If you're not capable of doing that gracefully, then don't do it.'

As fair as it is to call someone out when they say something you feel might be unfair, HOW can she not know who Robb freaking Stark is? Come on Cara HE'S THE KING OF THE NORTH for crying out loud!

@_richardmadden if you really want attention that badly, try focusing on your own work and not other people's

She then retweeted this bit of shade:

While Cara was pretty darn angry by his comments, Richard Madden responded to her tweets apologising, saying:

Hi @Caradelevingne, nothing but respect for you. Misquoted and blown out of proportion. #SlowNewsWeek

So we going to get #TeamRichard t-shirts printed now, or? Who do you think is in the right? Tweet us @sofeminineUK!

Jenna Coleman Is Reportedly Leaving Doctor Who. CLARA NO!