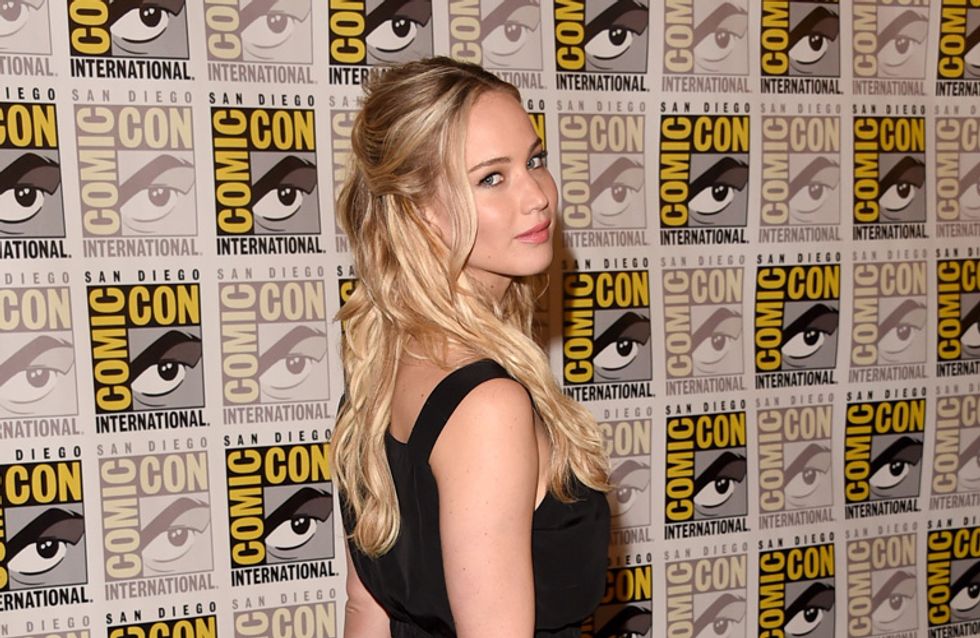 Miley Cyrus recently added another piece of ink to her growing collection. She tattooed a cartoon image of a sad emoji kitty that's similar to the one crying behind her in her AMA performance last year! We want to like it. We want to understand it...but we just don't - just like all the other tattoos on this list!

We love JLaw very deeply and would never let anyone say a bad word against her but seriously Jen? This was a very rash and odd choice of tattoo.

She said: "I was with Liam [Hemsworth]'s family and everyone was getting tattoos, and I thought well, I'm always going to need to be hydrated so I guess I should get 'H2O' on my hand...by the way I know that the '2' is high and it's supposed to be low. I should have googled it before I got it tattooed on my body forever."

Well, now you mention it yeah, you probably should have!

Miley Cyrus has nearly twenty tattoos on her body, so what's one more, right?

She revealed the new inner lip tattoo to her nearly ten million Instagram followers on Friday, March 14th. Normally this type of tattoo placement is hard to see but since the 21-year-old star loves to show off her tongue so much, we bet we'll be seeing a lot of this sad kitty over the next few weeks.

Fortunately for her, if she comes to regret this ridiculous tat she's in luck - lip tattoos tend to rub off over the course of a few months. Check out our list of tattoos that go our heads scratching.

Cheryl Cole, one fifth of the UK girl band, Girls Aloud, tattooed half her back and ALL of her ass in English roses. There's a joke in here about Cole thinking her shit smells like roses but we won't make it

In order to avoid future regret, most tattoo artists try to deter customers from getting tats of their significant others. The famous inker, Kat Von D, ignored that advice and put a rather large childhood photo of her boyfriend , Jesse James, underneath her armpit. What ever happened to the pair? They broke up, of course! And Kat had to go through numerous sessions of painful laser tattoo removal. *eyeball roll.

In January 2011, Rapper, Gucci Mane, inexplicably inked an ice-cream cone on his right cheek to remind us that he's a huge Ben & Jerry's fan?

Marc Jacobs is a successful fashion powerhouse whose pieces are constantly on "Must Have" shopping lists, but we don't think anyone's fawning over his tattoos. It looks like the bulky designer has treated his body like a personal doodle pad and has covered himself in random pop culture icons. We see you Spongebob SquarePants and the talking M&M!

The singer hasn't had a hit in years but his tattoo of Ryan Gosling got people talking about him again in 2013! He claimed he got the heartthrob's face on his leg through the world's worst game - Tattoo Roulette. "We blindfold each other: 'You get to pick a tattoo for me, and I get to pick a tattoo for you.' And you don't get to see it till they're both done." What a great game...

YOLO used to be the catchphrase...of four summers ago. Apparently, Efron was so moved by the phrase that he tatted it on his right hand. Oh, Zac... guess you had no idea how irritating that phrase would eventually become!

Another fine example of how a bad tattoo artist can turn a good idea into a very weird looking tattoo. The Hills star wanted a snake wrapping itself around a hybrid image of a heart and apple, but the apple just looks rotten and the sizing is way off!

The newly pregnant star has one of the hottest bodies in Hollywood. The tattoo of a sun setting over water on her inner arm..not so hot because it appears that the tattoo artist was a four year old.

After her widely publicized domestic abuse scandal involving Chris Brown, Rihanna got a gun tattooed on the side of her back. Her message is admirable - she didn't want to think of herself as a victim any longer. Yet, with so much gun violence in movies, music, film, and REAL LIFE, we wonder why she attempted to prove her point with such an upsetting image.

Megan Fox has a number of tattoos that expose her lack of research skills before heading into the parlor. She lasered off her tattoo of 50s icon, Marilyn Monroe because "she wasn't powerful at the time. She was sort of like Lindsay. She was an actress who wasn't reliable, who almost wasn't insurable." Uhh, maybe she should've read up on Monroe more before going to the tattoo parlor.

Are there other celebs with more puzzling tattoos? Let us know! Tweet us @sofeminineUK!