It’s not uncommon to see celebrities get their crows feet smoothed and wobbly bits sucked away and with Christina Aguilera’s recent jaw-dropping weight loss there's been speculation that The Voice USA judge has done just that. What do you think? Did Christina get in shape the hard way or did she have a little helping hand...?

Over the last few years we’ve seen Christina Aguilera change more dress sizes than we go through in a lifetime, but even her new tiny figure can’t be compared to any of her body transformations in the past.

The past few weeks X-tina has flaunted her newly trimmed bod and although we think she’s looking INCREDIBLE, for some, her drastic weight loss has become a cause for concern.

A slew of reports are alledging that lipo is the reason for her new svelte physique, but X-tina says otherwise.​

The 5-foot-2 songstress is now reportedly only 100 pounds (about 7 stone). Reports claim X-tina lost a hefty 80 pounds altogether with a recent 15-20 pound drop from her already trim frame and now experts are weighing in on the furore.

Dr. Fred Pescatore told RadarOnline.com: “It is especially noticeable in the chest where you can actually see bones whereas in the before picture you couldn’t.

“Her wrists and arms are much thinner than they were – which will put her at an increased risk for bone loss.

“Her hips are gone too – they are still there a bit and it is not the dress nor the pose – it is all slimmed down and not in a good way.”

But, sources close to I Am Beautiful singer have claimed that she’s worked very hard for her new body through good old fashioned diet and exercise.

A Voice USA insider told Life & Style magazine: “Christina didn’t get lipo. She’s worked hard to change her eating habits, and you can see the results.”

“The last thing Christina wants to hear is that people are talking about her losing weight with liposuction. She’s sick and tired of people assuming things about her body.” the source tells the magazine.

So how did X-tina really lose the weight?

Sources close to the star revealed the Dirrty singer brings packed lunches and snacks with her to work to avoid calorie-laden foods on offer backstage.

​And more surprisingly (and super hard in celebland) X-tina has even rejected a fair few cocktails, cutting back on the alcohol consumption altogether. She’s also an avid yoga fan.

Curvy or slim - We think Christina looks amazing either way!

What do you think is responsible for Christina’s new slim bod? Was it lipo or exercise? Tweet us @sofeminineUK! 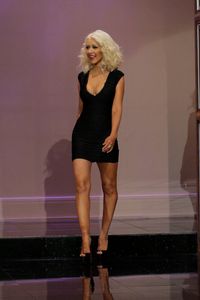