Strictly Come Dancing is on a ratings high, but it seems to be taking its toll on the current stars of the show. The former Royal ballet star and current Strictly judge admits that as the competition heats up, the celebrities involved are really having to step up their game and a lot of them are suffering from fatigue. We hope they can last until the show’s final in a few weeks!

There are seven remaining celebrities on Strictly Come Dancing as they are entering the tenth week of the BBC ballroom dancing competition.

But as well as Patrick’s recent hand injury and Natalie’s scary fainting episode, Darcy is also concerned about the health and wellbeing of the other Strictly contestants.

"As a dancer, you do realise what the celebrities are going through and you can feel their exhaustion," she told The Sun.

"We turn a corner after Blackpool. They do get tired and they have got to learn two styles now, which is going to change how people cope and get through the show."

Meanwhile favourite to win Natalie Gumede has spoken out about her terror over this week’s musical-themed episode, which she is currently rehearsing like mad for with her professional dancing partner Artem Chigvintsev.

The Corrie star told Yahoo! OMG!: “This week is musicals week, and we are dancing an American Smooth to 'I'm Telling You I'm Not Going' from 'Dreamgirls' and it's a big song.”

“[Artem] is currently pushing me to my limit, teaching me what seems like 15 intricacies per step - I'm currently remembering about 3. 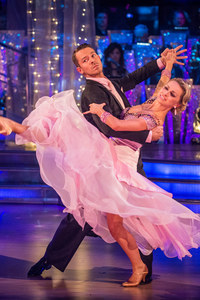 “The American Smooth also has lifts which I'm not a fan of. Not that they don't look great - on other people. I just like to keep my feet on the ground, both physically and metaphorically, and I struggle with relinquishing control.”

“Not that I don't trust Artem implicitly, I do, and he's totally got me. But I can't simply go with it, and the result is poor old Artem having to hoik me about like a sack of coals.”

“I also find it slightly ridiculous trying to emote not being able to live without someone whilst attempting to handstand off Artem's knee.”

Well after continually topping the leaderboard – last week Natalie and Artem got 37 out of 40 – we can’t wait to see how she does this week!

Meanwhile Patrick and Anya will be doing the Charleston to Chitty Chitty Bang Bang, Abbey and Aljaz are going to salsa to You Should Be Dancing from Saturday Night Fever, and Sophie and Brendan will attempt a Viennese waltz to My Favourite Things from The Sound of Music.

Mark and Iveta will be doing a samba to I Just Can't Wait to be King from The Lion King and Susanna and Kevin are going to Quickstep to Good Morning from Singin' in the Rain.

Who have you got your money on to win the 2013 series of Strictly Come Dancing? Tweet us @sofeminineuk.