Ironically, Courteney Cox, Cougar Town’s most dysfunctional femme fatale isn’t so different from the character she plays on TV. In fact, they appear to share the same taste in men! The actress has been spotted out and about with her new toy boy, Johnny McDaid, whom she reportedly met through Ed Sheeran (he's currently staying in her pool house - strange we know!). Good on you Court!

Cougar Town star, Courteney Cox stepped out with her new (and much younger) beau on Sunday Dec. 8.

On the night of the party Johnny was photographed looking comfortable in the passenger seat of the car as Courteney drove them to the A-list festivities.

Onlookers told Life & Style that Courteney and Johnny were definitely more than platonic pals and the proof was in the PDA.

The onlooker said: "They arrived around 7 p.m. and left together about three hours later.”

“Courteney definitely looked like she was on a date! They were holding hands during the party.”

Johnny (who’s originally from Ireland) moved to L.A. to work on Ed Sheeran’s new album, but the album was finished last week, leaving us wondering why Johnny was still around.

Did Ed play match-maker? No word of Ed’s attendance at Jen’s holiday bash, but the singer was spotted with Courteney and Jen on Nov. 28 where he joined them for Thanksgiving feast.

​He must have been the great mind behind the new romance! After all, it’s not the first time Ed’s got involved in other people’s romantic woes.

The red-headed singer seems to have a few tricks up his sleeve when it comes to matchmaking and love.

Serial dater Taylor Swift recently revealed that Ed had been giving her relationship advice while they were on tour together.

Taylor said: “I think that you can love people without it being the great love. Ed [Sheeran] said something that really resonated with me. He says there are different kinds of love.”

Courteney was previously with Cougar Town's, Brian Van Holt whom she dated for six months.

Is Ed playing cupid again? Do you think Courteney's brewing romance with Johnny is one set to last? Tweet us @sofeminineUK! 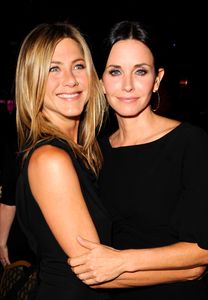