by Emmy Griffiths Published on 5 November 2015

We're so excited for finally having Benedict Cumberbatch in the Marvel Universe as a hero in Doctor Strange that we will take ANY information that is given to us - even if said info is taken from blurry mobile phones. These recent snaps of Benedict Cumberbatch filming in Nepal are our first sneak peek at our favourite actor as Dr Strange, and we have to say he is looking PRETTY scruffy...

Reminiscent of the time he went undercover as a homeless druggy in BBC's Sherlock, Benedict looks seriously scruffy while filming the much anticipated Marvel movie. With a scraggly beard, layers of unwashed clothes and a beaten backpack, Benedict is seen walking through street markets whilst clutching a bundle of papers in a bandaged hand (because of his car crash! Nailed it).

The movie follows Benedict as Dr Stephen Strange, a brilliant neurosurgeon who's career is ruined after a car crash damages his hands. According to IMDB, the character finds a: "new lease on life when a sorcerer takes him under his wing and trains him to defend the world against evil."

From what we know from the comics (spoilers!), it seems that the leaked shots from set show Dr. Strange travelling around the world to try to find a solution to his damaged hands before stumbling onto The Ancient One, who changes his life forever. 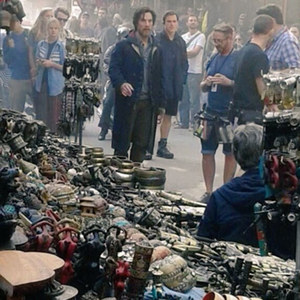 Are you looking forward to the movie release? Tweet us @sofeminineUK!