Does Tom Cruise want to get back together with Katie Holmes?

TomKat do go through some drama, don’t they? Since splitting up in June 2012, the two of them have not been seen together at all, leading Tom to be accused of scarcely seeing their daughter, Suri. We all assumed that the two were entirely finished with each other, but now, apparently, Tom wants Katie back! We think it may be mission impossible, but he’s managed that four times before... (Sorry.)

Apparently Tom Cruise wants his ex-wife Katie Holmes back after being divorced for over a year.

According to the National Enquirer, the Minority Report actor still communicates regularly with his ex-wife, and has realised that he is in still in love with her. Naw!

An insider revealed: “Tom wants Katie and their old life together back.

“There’s no other woman in his life, and he wants the three of them to be a family again, especially with the holidays around the corner.”

It does make us a little sad to think about poor old Tom Cruise alone on Christmas Day without Katie or their daughter Suri.

​Although he keeps in constant contact, he hasn’t seen Suri in a while due to filming, so perhaps it is absence that has made his heart grow fonder of his ex-wife.

​The source also said: “Tom is in constant contact with Katie about Suri via phone and email, and he’s realised that he wants Katie back.

“He’s done a lot of thinking lately and came to the conclusion that he’s still as close to Katie as anyone else in his life.”

Katie Holmes to give evidence in Tom Cruise’s libel lawsuit?
Katie Holmes could be called on to give evidence against her ex-husband Tom Cruise as he goes head-to-head with magazine publishers Bauer Media in a $50 million libel lawsuit. Life & Style magazine claimed he had “abandoned” his 7-year-old daughter, Suri, an accusation that Tom has vehemently denied. As the court case rages, it looks like Katie may well be asked to take the stand to talk about Tom’s parenting and their marriage.

Their would-be seven year anniversary came and went on Monday, which may be what has stirred up these feelings with Tom. Katie may also have been thinking about the relationship when she posted a cryptic Andre Maraux quote onto Twitter stating: “The real struggle begins when you have to content against a part of your own self.”

Also, since the two broke up they haven’t done a great deal of dating, with rumours that Jamie Foxx was dating the Dawson’s Creek star quickly put to bed.

Indeed, it has also been suggested that the two briefly hooked back up last year when they met to arrange Suri’s holiday plans, as a source then told the publication: “When they got together last year, one thing led to another, and that led to something a lot of ex-spouses do when they’re alone together.”

Anyone raising an eyebrow, or is it just us? Tweet us @SofeminineUK 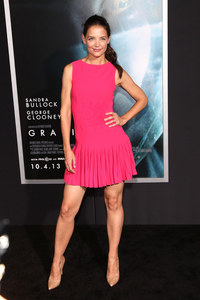 by the editorial team
+
All the news about Katie Holmes