Eminem reaches out and offers help to Justin Bieber

If you think that someone as cool as Eminem wouldn’t waste his time trying to befriend hair swishing popstar Justin Bieber, you’d – weirdly – be wrong. Eminem has apparently expressed his concerns about the Biebster and has reached out to help the singer as it seems he is getting closer to circling the drain of washed up child stars. Eminem, who has had his own fair share of problems – select any of his songs at random for more information – apparently wants to help out the Baby singer.

They would be the strangest bromance in the celebrity world, but apparently Eminem wants to help out Justin Bieber before he falls too far down the rabbit hole of drugs, booze, prostitutes and so on and so forth.

According to The Sun, the rapper invited the Biebs to stay with him in Detroit over Christmas to help get him back on the right track. Apparently he’s not afraid to take a stand!

The truth behind reports "Eminem's daughter" insulted Taylor Swift because of Harry Styles
It was one of the most bizarre stories of 2012 - but it was not quite as it seemed. 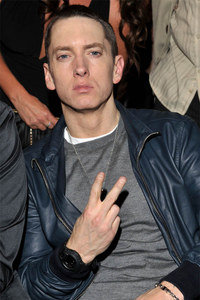 ​An insider revealed that Eminem is: “really hoping he can sort Justin out. The way he’s going he’s worried he’s going to end up in really bad trouble.”

Also, this may be a little cynical, but we’re sure he will also get major best dad points with his two teenage daughters if he invites Justin over for a while. Just saying.

The source continued: “He wants to talk him into going to therapy and counselling to deal with the stress of fame in a positive way.” Well, fame is a powerful thing. Maybe that’s what happens when a tornado meets a volcano…see what we did there?!

Apparently Eminem has also suggested they should record some material together if the Biebs gets on the straight and narrow.

“Eminem would consider going into the studio with him if he sorts himself out, which would be a dream come true for Justin,” the source concluded.

Apparently Paul Rosenberg, Eminem’s manager, has also told Bieb’s manager Scooter Braun that: “if you ever want Eminem to talk to him, he would do it in a second.”

Seriously Bieber, don’t you hear sincerity in his voice when he talks? Maybe you should take him up on the offer!

It does seem like the 19-year-old’s behaviour is getting steadily more erratic, as recently he has gotten in trouble for graffiti, as well as supposedly calling a fan “a beached whale”, and was detained in Australia after a drugs bust.

Sigh, we’re looking forward to you sorting him out, Eminem!

Do you reckon Justin Bieber needs some help? Tweet us @sofeminineUK