Home / Entertainment / News celebrities / "Everything Is About To Be Terrible." NSync's Joey Fatone Tells One Direction Their Future

"Everything Is About To Be Terrible." NSync's Joey Fatone Tells One Direction Their Future 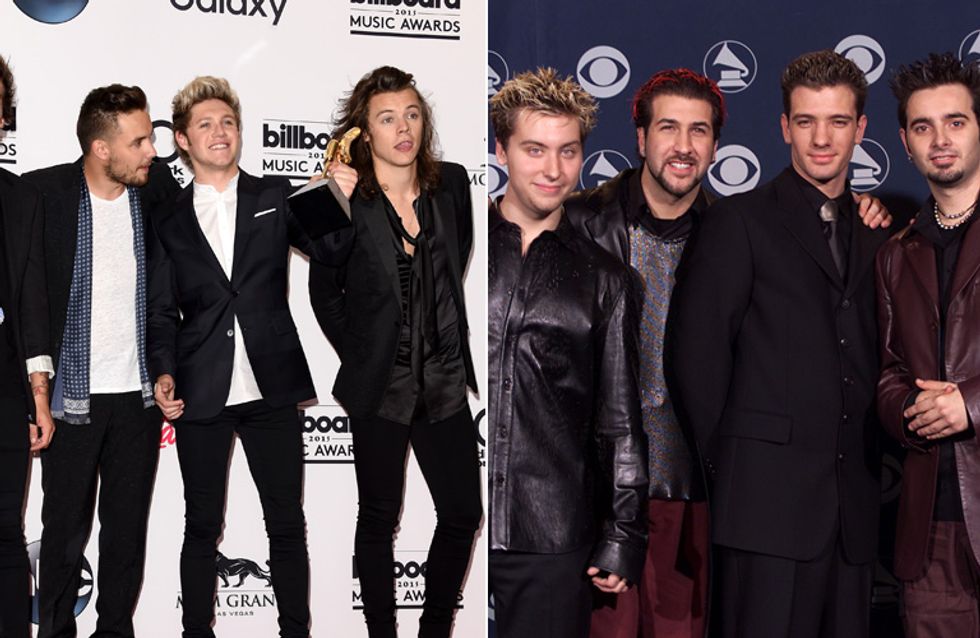 Oh NSync. Remember when they were at the top of their game and had the whole world before them? Because NSync band member Joey Fatone does, and in light of One Direction taking a break from the band, he has allegedly come forward with a serious warning for the 1D boys and honestly? We kind of see where he's coming from!

Plenty of people have been commenting on the One Direction split, from hysterical fans to smug Nineties kids who have been through it all before to Ryan Reynolds worrying about his tattoo:

Do NOT make me regret this One Direction tattoo on my lower back, fellas.

So it is hardly surprising that old school boy band member Joey Fatone has reportedly come forward with his own bit of wisdom taken from personal experience. His message? They are all absolutely screwed. Be afraid boys. Be very afraid.

Check out the letter in all of it's sarcastic, Justin-Timberlake-comparing glory.

Hey guys. It’s Joey Fatone, former member of NSync and current announcer on Family Feud, the job I’ve always dreamed of. This weekend, while sitting on the toilet and crying (I LOVE MY LIFE!!!) I flipped through my iPhone and saw that you’d announced a "one-year hiatus" beginning in March. I just wanted to congratulate you guys and wish you well! I’m sure 2016 will be a wonderful time for everyone from One Direction to pursue some independent projects before regrouping as a stronger band one year later! Here’s to spreading your wings!

​Here’s how it’s gonna go down, fellas. While you’re all on hiatus, Harry will record some dope singles with Beyonce, Ryan Adams and Wiz Khalifa, come out with a killer solo album produced by Pharrell and Timbaland, cut his hair, dye his hair, do a second less awesome album, let his hair grow super long and wear it in two braids, crush a self-effacing cameo in a Judd Apatow movie, buzz his hair and release a third, self-produced album on which he hints at being bisexual that everyone will call his “best work.”

Here’s me being a spokesman for Bosley hair restoration last year:

​Best case scenario, you’ll do a 6-week stint in Minions: The Musical! on Broadway before you bounce around different hosting jobs on channels like Spike and TruTv. Do you know what Chris Kirkpatrick is doing? Because I don’t. He’s completely unreachable. He might be managing a Best Buy in Sacramento, he might be dead. No one knows. Louis, I’m looking at you.

There is one exception: If one of you is gay you might have a shot. Wait till One Direction has been dead for two years, kiss your hot boyfriend at an awards show, then ride that relevance like a beautiful boner and pray to god you get a show on Bravo.

t’s not that you guys aren’t talented, it’s that Harry is so, so much cuter, cooler and more talented than the rest of you. Deep down, you’ve always known that, but you will never truly understand it until you’re in your grimy little condo, sitting in your boxers, sucking a chow mein noodle off your Playstation controller and watching Harry blow it up on SNL.

Jesus christ I wish I was still in NSync. Jesus…JESUS FUCK! I would give all my hair to go back to that.

Anyway, enjoy the next few months, One Direction, because they’re your last."

Wow. Does anyone think this is actually exactly how it's going to go down? Tweet us @sofeminineUK!