Everything We Know About Sherlock Season 4 So Far 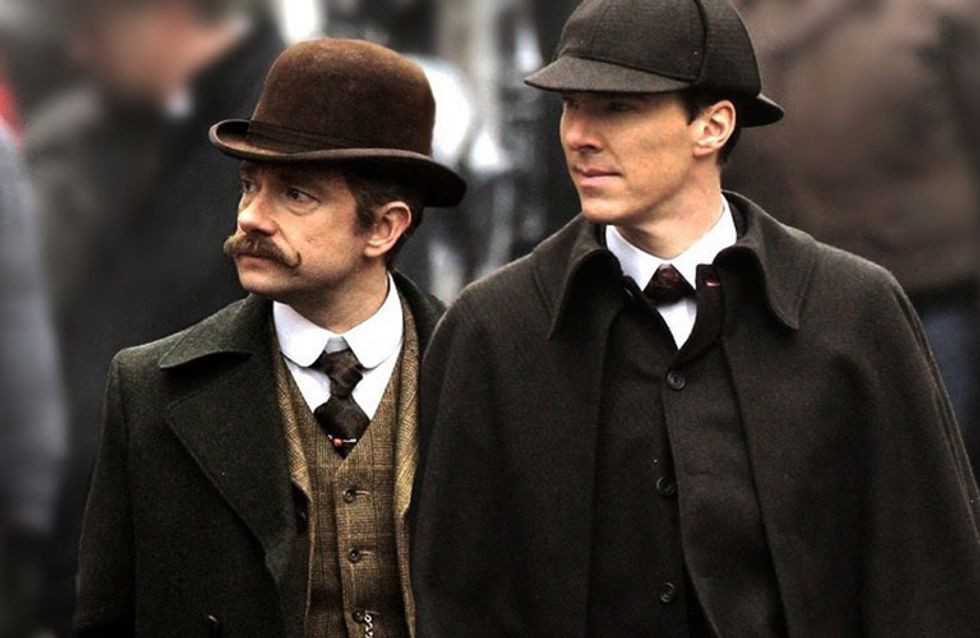 We love the BBC adaptation of Sherlock, but it does come with it's fair share of problems. For example, we have had nine episodes of the immensely popular drama in five years. FIVE YEARS. The gaps between filming are so huge that we have nothing to do in the meantime but look to the far-ahead future for when we will finally have more sweet, sweet episodes. So with no further ado, let's look at everything we know about upcoming Sherlock so far...

Season 5 hasn't even been confirmed *sobs*

That's not to mean it will be cancelled (let's face it, if the BBC had their own way Benedict Cumberbatch and Martin Freeman will be playing their roles into their nineties), but more than Stephen Moffat likes to keep us sweating over the future of the show. Chatting to Digital Spy, the showrunner and possible genius refused to reassure fans that the series had a long bright future ahead.

He said: “No, I’m not going to reassure people. People should be very very afraid and nervous and worried. Paranoid in fact.”

You'd think that Stephen Moffat feels a little bad when hoards of fans of imploring him to hurry up and make them more sweet, sweet episodes but for Moffat, the wait is what makes the show so successful. He said: “It was never the plan for it to be our unique rate of delivery but it doesn’t hurt! It’s interesting that starvation works as well as it does.”

You know what Stephen? We've started to get HANGRY.

Season 4 is going to be based around consequences

Chances are these consequences will come from the fact that Sherlock shoots a guy in the head in the season three finale (in non-threatening circumstances, even though the guy was the most villainy of villains). Moffat said: "[Series four] is going to be... I suppose you'd say... consequences. It's consequences. Chickens come to roost. It's dark in some ways - obviously it's great fun and a Sherlock Holmes romp and all that - but there's a sense of things coming back to bite you."

(But will still be hilarious)

Don't worry! There'll still be on the gags from our favourite bromance (fingers crossed they'll try to solve a crime drunk again because that was funnyyyy). Stephen said: “There’ll always be fun and jokes and detection and all that nonsense.”

Victorian Lestrade is going to have massive mutton chops

Actor Rupert Graves also talked about how much fun he has taking away the modern aspect of Lestrade's personality: “I had to play him as a Victorian copper, whatever that means! The tone is different.”

And John Watson will have quite the impressive handlebar moustache

As seen in this preview clip of the episode. So. Exciting.

Season 4 hasn't even started filming yet

Christmas 2015 will see the show thrown back into the Victorian era like the original stories before they were given a modern day twist. However, apparently the writers enjoyed it so much they're thinking about trying other time eras. Moffat said: “Maybe we’ll just alternate. Mark and I now think we should do the 1940s German propaganda version.”

Dark stuff in on the way...

Or as Moffat put it during Comic Con, viewers will be: "sucker punched into emotional devastation". Fab.

We'll keep updating this any time there is a HINT of Sherlock season 4 news and, in the meantime, we suppose googling Benedict's Hamlet rehearsal photos will just have to do! Are you looking forward to the upcoming Sherlock episodes? Tweet us @sofeminineUK!